Republicans See the Light on Immigration 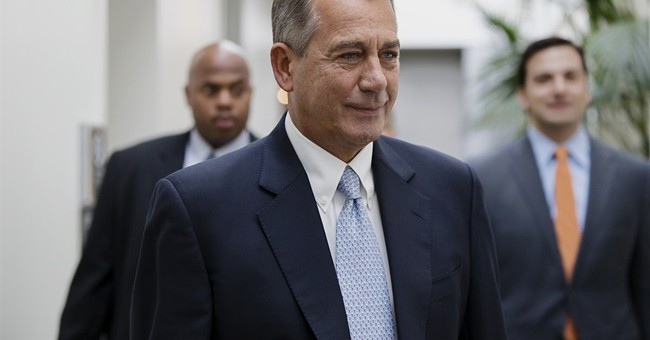 In 2012, the Republican Party stood for the ancient biblical proposition that the sins of the father should be visited upon the son. Mitt Romney captured its presidential nomination while vowing to veto the Dream Act, which would allow immigrants brought here illegally as children to gain citizenship.

Not coincidentally, Romney lost the election while getting just 27 percent of the Latino vote. Many Republicans concluded they had no choice but to revamp their policies on issues of particular concern to Hispanics. As prominent conservative blogger Erick Erickson so bluntly put it, "The fastest growing demographic in America isn't going to vote for a party that sounds like that party hates brown people."

The new statement of "principles on immigration" issued by congressional Republicans does not sound hateful toward brown people. In fact, it flatly contradicts Romney on the Dream Act. "It is time to provide an opportunity for legal residence and citizenship for those who were brought to this country as children through no fault of their own, those who know no other place as home," it declares.

That's not the only change. The 2012 party platform heaped scorn on "any form of amnesty for those who, by intentionally violating the law, disadvantage those who have obeyed it" and promised steps to force what Romney winningly called "self-deportation."

But this outline agrees, a bit grudgingly, that "these persons could live legally and without fear in the U.S." if they meet certain requirements, like paying back taxes, passing background checks and learning English. Only a "special path to citizenship" is categorically rejected.

On the latter point, the Republicans disagree with President Barack Obama, who wants to create a new avenue for the undocumented to be naturalized. But Republicans don't rule out eventual citizenship, and they do address the most pressing concerns of the people here illegally: ending their fear of deportation and letting them work legally.

It's a major change, which makes it significant but also risky -- not because of the response it may draw from Hispanics but because of the reaction it may provoke among Republicans. Many of them see unauthorized migrants as an affront to the rule of law, an alien cultural influence and a political threat.

The House GOP leadership has the thankless task of changing the minds of these conservatives -- or at least keeping them from a revolt that would derail legislation and further alienate Latino voters. The need to appease tea partiers explains why the blueprint contains so many tough but ill-considered demands.

"We must secure our borders now and verify that they are secure," it says, which is like saying we must eradicate all criminal activity or ensure that every childhood is happy. Our borders will never be made secure as long as large numbers of poor foreigners see America as the end of the rainbow. They will find ways to get in.

Republicans generally oppose burdensome regulations of business, and many of them are leery of giving the federal government more power to monitor law-abiding citizens. But somehow they are infatuated with E-Verify, which would require the federal government to confirm the employment eligibility of every new hire in America.

This system, endorsed in the new statement, is billed as a weapon against foreigners who break our laws. But it would apply equally to native-born Americans who have never so much as missed a dental checkup. When the federal employment verification system makes mistakes, as it does, businesses are forced to postpone hiring and applicants end up cooling their heels.

"Every tyranny silences opponents by controlling their ability to earn a living," wrote economist John Cochrane of the University of Chicago and the Hoover Institution in The Wall Street Journal. "How is it that so many supposedly freedom-loving, small-government Republicans want to arm our nation's politicized bureaucracy -- fresh from the scandals at the IRS and elsewhere -- with the power to do just that?"

The good news is that these GOP members grasp the need to moderate their policy. They also offer an authentic compromise: granting legal status to millions of people but not assuring them eventual citizenship. The bad news is that the statement perpetuates the fantasy of wiping out illegal immigration by empowering government.

But the congressional Republicans are halfway toward reality, which represents big progress. And who knows? Maybe in time they'll realize that reality isn't going to meet them in the middle.