Safe Toyotas, and Other Surprises 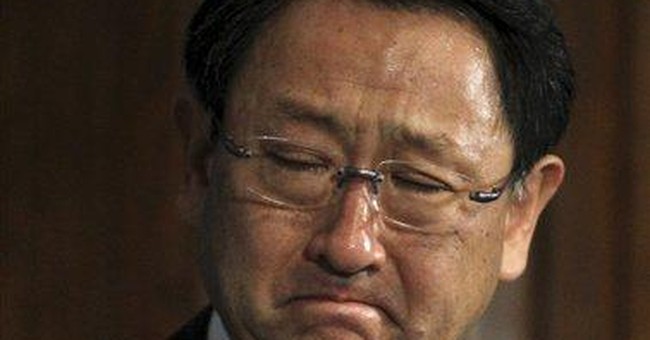 Last week, facing a congressional committee acutely dissatisfied with his company's safety record, the head of Toyota, Akio Toyoda, was asked what he would tell President Barack Obama if he had the chance. His surprising reply: "Toyota cars are safe."

No one denies that these defects have caused some horrifying accidents that were preventable. Still, worrying that you are going to be killed while driving a Toyota that suddenly zooms out of control on the road is like worrying that you are going to die of a spider bite while climbing a ladder onto your roof. Though either is possible, the chief dangers are the ones you take for granted. Driving is a hazardous activity, but rarely because of unsafe cars.

During the last decade, the sudden acceleration of Toyota vehicles has been blamed for 34 fatalities. In that same period, more than 21,000 other people died in accidents while riding in Toyotas. Your own lapses, and those of other drivers, are far riskier than the flaws found in your automobile.

Chuck Hurley, CEO of Mothers Against Drunk Driving, agrees on the pressing need for Toyota to repair its troubled cars. But he estimates that more than 80 percent of traffic deaths are the result of excessive speed, drunken driving or unused seat belts. Last year alone, more than 11,000 Americans died in accidents involving drunk drivers. By contrast, only about 2 percent of wrecks stem from vehicle defects.

Yet Congress is not holding hearings to ask Toyoda why his company sells cars that can travel well above the speed limit, with engines that start even if the operator is too drunk to spell "key." It would rather worry about freakish risks inflicted on us than common ones within the control of individual motorists.

The current sentiment on Capitol Hill is that carmakers cannot be trusted with our well-being and therefore stern government action is in order. In fact, safety is a big selling point in the auto marketplace -- which happens to be one reason Toyota has sold so many cars.

No vehicle is flawless, and a vehicle that accelerates for no reason poses an unacceptable danger. But there's no reason to single out Toyota for congressional histrionics. In the latest analysis of driver fatality rates in different vehicles by the Insurance Institute for Highway Safety, Toyota vehicles do not turn out to be the four-wheeled caskets Congress imagines. In fact, they consistently rank better than average.

The Matrix, for example, has the best record among station wagons, with a death rate less than half of that of the worst vehicle in its class. The 4Runner and Highlander finished first and second among midsize SUVs. The popular Camry and Corolla get high marks for crash-worthiness.

When it comes to defects, the company is hardly unique. Over the past five years, The Wall Street Journal reports, the federal government got more complaints from owners of Fords than owners of Toyotas. Out of 20 carmakers, says Edmunds.com, Toyota is fourth best in the number of complaints per vehicle sold. But none of the others is being used as a piñata.

A more expansive government role is one of those answers that is neat, simple and wrong. "There are 250 million vehicles with 3,000 parts apiece," says Hurley. It's safe to assume the government couldn't police them all, even if it chose to do nothing else.

Fortunately, it doesn't have to do that in order for consumers to be protected. A carmaker's need to attract buyers is a far more powerful force for safety. As Yoshimi Inaba, head of North American operations, told Congress, "Nothing costs Toyota more than the loss of customer trust in our vehicles." Another reliable motivator is the urgent desire not to pay millions of dollars in damages, as Toyota is likely to do once the courts have had their say.

So it is likely to make its vehicles safer than before -- which doesn't mean your morning commute will necessarily be less fraught with peril. Angry members of Congress would like to blame highway carnage on self-interested auto executives. They forget that as a rule, cars don't kill people. Drivers do.