The Real Reason for Obama's Unpopularity 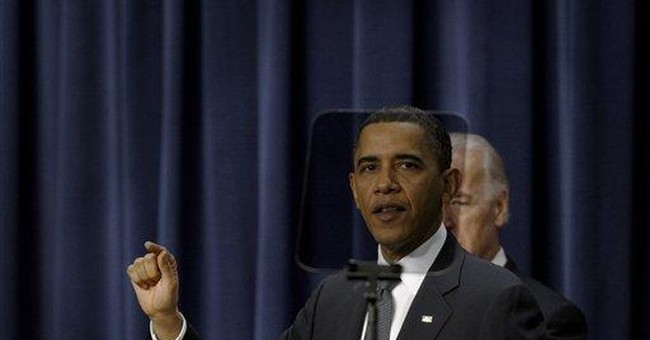 When a president suffers a sharp decline in popularity early in his term, it seems safe to conclude he has badly misjudged the mood of the electorate, pushed the wrong policies and set himself on the path to becoming a one-term president.

That, it's widely agreed, is the sad tale of Barack Obama, who has managed to demoralize liberals while inspiring a wave of gloating among conservatives. A new CNN/Opinion Research poll finds that already, most Americans want to vote him out in 2012.

But both Democrats and Republicans are jumping the gun. They forget that this storyline also describes Ronald Reagan, who saw his approval rating sink over his first 12 months -- yet rebounded to carry 49 states in his 1984 re-election bid. Bill Clinton was significantly less popular than Obama for most of his initial year, and we all know how that turned out.

George W. Bush likewise managed to hack off a lot of onetime supporters soon after taking office, and when his popularity soared eight months into his term, it was not because of anything he did but because of the 9/11 attacks. He, too, won re-election.

American politicians and commentators are generally not afflicted by a deep knowledge or appreciation of history. If they were, they would not waste their time laboring to explain something that requires little explanation. They could simply state the obvious -- new presidents invariably lose public esteem in the first year of their terms -- and go on to try to explicate something truly mysterious, like Lady Gaga.

That's the implication of research by Douglas Rivers, a professor of political science at Stanford University, scholar at the Hoover Institution and professional pollster. Though Obama rated the lowest of recent presidents at the end of his first year, Rivers says the pattern "is pretty much in line with what you would expect." What we see is "more a continuing trend than an Obama phenomenon."

That's not to say Obama has made no mistakes. You can't occupy the White House without disappointing a lot of people. Every president bungles some things, and every president pays a price.

His fiscal policy and health care plan, in particular, have energized the opposition and spawned public resentment. On the other hand, his grades on gay rights and immigration have actually improved -- possibly because he has done less than expected on either issue. There is no real evidence to suggest that the public finds Obama far more fallible or detestable than they usually find presidents at this stage.

I wish I could say Americans' suspicion of health care reform shows a sensible appreciation of the limits of government power and responsibility. But I suspect the real problem is they fear it will not guarantee them everything they want at someone else's expense. Rivers notes that when you ask people about specific components of the plan, they turn out to be "fairly popular."

If Americans distrust the government, they also take a dim view of the private sector, or parts of it. "Anything negative for insurance companies is popular," says Rivers. Most people blame insurers for rising health care expenditures, even though insurance companies are one of the few constituencies with a powerful interest in reducing outlays.

It's a mistake to think every political trend has deep meaning. Most of the disillusionment with Obama is the result of a natural process that tells nothing about the future. Every honeymoon ends, but the end of the honeymoon is not a harbinger of divorce.