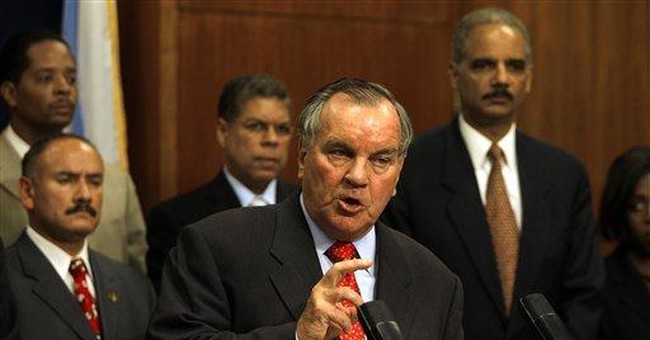 Last week, the body of Chicago school board president Michael Scott was found in the Chicago River with a single bullet wound in his head. The big story was that this powerful, well-connected public official had, according to the county medical examiner, committed suicide. The less-noticed story was that he did it with an illegal weapon.

After all, handgun ownership is not allowed in the city of Chicago, which has one of the strictest gun control laws in the country, and Scott killed himself with a .380-caliber sidearm.

Unlike most Chicagoans, Scott could have been a legal handgun owner. Because he had it before the ban was enacted, he was allowed to register and keep it. But the police department says he never did. By having it in the city, Scott was guilty of an offense that could have gotten him jail time.

Amazingly enough, he was not the first local public official to take the view that firearms restrictions are something for other, ordinary people to observe. Chicago politicians are zealously committed to gun control in law but fairly relaxed about it in practice.

In 1994, State Sen. Rickey Hendon had an unregistered handgun stolen from his home in a burglary, and he didn't feign contrition about his disregard of the ordinance.

"I have a right to protect myself," he declared, noting that he had been burglarized before -- and forgetting that the state legislature of which he is a member allows Illinois cities to deprive their citizens of that right. Asked if he would replace the lost piece, Hendon said, "No comment." The police were kind enough not to charge him.

U.S. Sen. Roland Burris, another Chicagoan, has endorsed a nationwide ban on handguns and, in 1993, organized Chicago's first Gun Turn-in Day. But the following year, while running unsuccessfully for governor, he admitted he owned a handgun -- "for protection," he explained -- and hadn't seen fit to turn it in along with those other firearms. Lesser mortals apparently can protect themselves with forks and spoons.

Scott was shot in the abdomen while chasing a burglar in 1988, so it's understandable that he would appreciate the value of having the means to defend himself against criminals. But that understanding didn't extend to the needs of ordinary Chicagoans. When the city gun ban was challenged in court, the board of education that he headed filed a brief defending Chicago's right "to prohibit classes of arms in order to prevent crime and protect public safety."

A law banning handguns, in Scott's view, was necessary to protect public safety. But when it came to protecting his private safety, he somehow perceived the law to be a hindrance, not a help.

Does his attitude carry the distinct tang of hypocrisy? Yes, but that's not out of the ordinary for Chicago politicians. Under a state law dating back to 1872, mayors and aldermen are designated peace officers. And, conveniently, peace officers are permitted to not only own but carry handguns.

That makes aldermen a special class in Illinois, one of only two states with an almost complete ban on the carrying of concealed handguns. In most places, an adult with no criminal record or history of psychiatric commitment can get a concealed-carry license after taking a training class.

But here, we have a unique system. You want to be able to pack a weapon in public for your safety? Fine. All you have to do is 1) run for the city council and 2) win.

Why the state assumes that aldermen are fit for this prerogative is a mystery. "Law-abiding" is not the very first word that comes to mind when you think of the city council. Since 1972, 27 of its members have been convicted on charges involving malfeasance, misfeasance, nonfeasance, disfeasance and anti-feasance with mopery aforethought.

It would be hard to come up with a group of people that has proven itself less deserving of blanket trust. The most recent convict, Arenda Troutman, got four years in prison for bribery after being caught on tape attesting that "most aldermen, most politicians are ho's." At a 1991 neighborhood meeting that got rowdy, Ald. Dorothy Tillman reportedly pulled out her handgun and waved it pugnaciously.

In Chicago, only criminals and aldermen are armed. Forgive me for being redundant.