The Secret of Palin's Staying Power 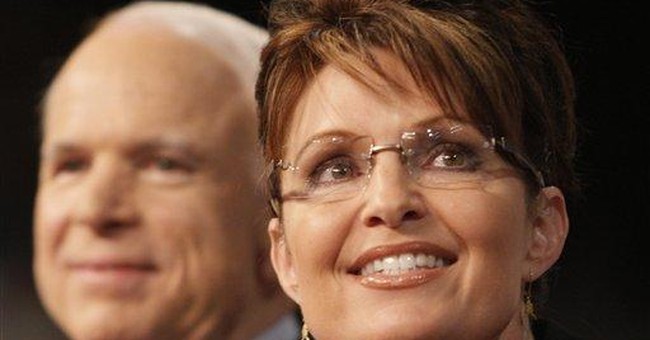 In October 2005, when President Bush announced his nominee for the Supreme Court seat being vacated by Sandra Day O'Connor, conservatives who had been loyal to the administration rose up in perfectly reasonable fury. Harriet Miers was not their idea of a Supreme Court justice. She was, they noted, intellectually undistinguished, ill-qualified for the job, lacking impeccable conservative credentials and inept in handling basic constitutional questions.

All those things, of course, could also have been said about Sarah Palin. But just as quickly and vigorously as conservatives rejected Miers, they embraced Palin. Even after her bungling performance in the 2008 campaign and her strange decision to resign as governor of Alaska, some of them still do.

"This unusual move might be the right move for her to become president of the United States," insisted William Kristol, editor of The Weekly Standard. Columnist Jonah Goldberg assured the governor that no matter what, "You are the 'It Girl' of the GOP." National Review editor Jay Nordlinger confessed, "I am an admirer and defender of Palin's. Oh, what the heck: I love the woman."

Why on earth are they infatuated with her? Palin has hardly helped to revive the conservative cause. For all her alleged star power, she did nothing to improve the GOP ticket's fortunes on Election Day. She showed no gift for articulating conservative themes, beyond ridiculing liberals as overeducated, big-city elitists -- a description that applies equally well to most conservative commentators.

In two months on the ticket, she boosted her unfavorable rating from 7 percent to 48 percent, while the unlovable Joe Biden ended up viewed negatively by only 32 percent of Americans. Finally, last week, she gave a pitifully incoherent explanation of why she was stepping down as governor of Alaska with a year and a half left in her term -- which you might think would mortify anyone who put his faith in her.

But it's really not hard to see why Palin inspires such devotion. And I do mean "see." She has one obvious thing going for her that Miers didn't: She's a babe, and she doesn't try to hide it.

As an article in the latest issue of Vanity Fair puts it, Palin "is by far the best-looking woman ever to rise to such heights in national politics." And while that fact doesn't earn her points with me, it obviously does with many other people.

It's hard to exaggerate how valuable a pleasing appearance can be. Numerous studies show that people rated good-looking make more money than those who are not so easy on the eyes. In the modern media age, the same effect holds in politics.

Good looks are a big advantage to male politicians as well. No one would have given the time of day to John Edwards or Mitt Romney if they were short, paunchy and bald. When Texas Republican Sen. Phil Gramm ran for president in 1996, he said, "The real question is whether someone as ugly as I am can be elected." He got his answer.

Palin is a clear rebuttal to the old line that politics is show business for ugly people. Tina Fey, who is pretty enough to make it in Hollywood, marveled after meeting Palin on "Saturday Night Live," "I'll tell you, that lady is five times better-looking than I am."

This may explain why, for all the talk about her as the stirring embodiment of the Walmart-shopping hockey mom, Palin's fans are heavily male. A June poll by the Pew Research Center for the People and the Press found that her approval rating was 48 percent among men but only 41 percent among women. Females are less susceptible to feminine charms.

Palin is not alone in using her looks to enchant the Republican faithful. Carrie Prejean went from being a runner-up for Miss USA to a conservative heroine because she came out against gay marriage in her pageant interview -- but also because she wears a bikini well. Ann Coulter would be just another rabid pit bull if not for the long hair and short skirts.

Harriet Miers' problem was that she couldn't overcome her deficiencies with sex appeal. When people remain ardent fans of Palin no matter how badly she performs, it's reasonable to wonder what they are thinking. But thinking has nothing to do with it.

Here's How You Know Democrats Rigged and Stole the 2020 Election
Townhall
'Elitist schmuck' Bette Midler confuses peanut butter and popcorn in an awful meme on COVID-19 vaccinations
Twitchy
Can We Put Pelosi out to Pasture Already for What She Just Did to Willie Mays?
Redstate
Canadian Pastor Swarmed and Arrested by 'SWAT' Team for 'Inciting' People to Attend Church
PJ Media