A Cornfed Remedy for Illinois Graft 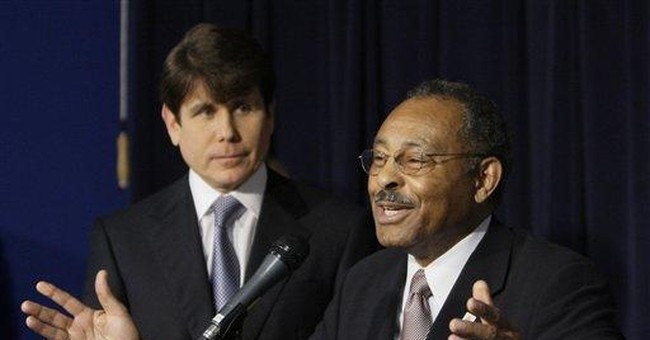 Being proud citizens of the Hawkeye State, you are all probably still basking in the glory of helping our own Barack Obama's quest for the presidency by giving him a victory in the Iowa caucuses. As fellow Midwesterners, let us say: Nice work. In four years, Washington may be changed beyond recognition. But knowing the depth of public spirit in Iowa, let us also say: Your work is not finished.

As you may have noticed if you ever get the news on WGN, Obama was not quite able to transform our state during his time in the legislature. It's as ethically imperfect as ever, if not more so. How bad? Put it this way: If an Illinois politician moved into a pigsty, the pigs would leave in disgust.

Anyone watching from another state must be amazed by the amount of graft that is regularly on view here. It's enough to shock even people in Louisiana -- where after Hurricane Katrina, one Bayou wag said half the state was under water and the other half was under indictment.

This year has had a full quota of seamy developments. Our former governor, George Ryan, remains in prison after failing to win a presidential pardon. A onetime top aide to Chicago Mayor Richard Daley is about to go on trial for his alleged role in a fraudulent city hiring scheme. A former Chicago alderman got sentenced to four years in prison for demanding bribes from local developers.

Our new U.S. senator, Roland Burris, faces a Senate ethics investigation after repeatedly changing his story about how he got appointed to the seat by Gov. Rod Blagojevich. That's the same governor who was recently impeached and removed from office for allegedly trying to sell that Senate seat for his own benefit.

We would like to say this is unusual, but it's really about as unusual as a cold day in February. Since 1970, according to a report done at the University of Illinois at Chicago, 1,000 people have been convicted of public corruption -- including three governors, 19 Cook County (Chicago) judges and 30 members of the Chicago City Council.

It may surprise you to learn that Illinois does not rank as the least honest state in the country. According to an analysis of federal data on the 35 most populous states by the Corporate Crime Reporter, we come in 6th in public corruption convictions per capita. But after the Blagojevich scandal broke, editor Russell Mokhiber said he was reconsidering. "If there was a BCS for corruption," he admitted, "I think right now you'd have to put Illinois in the title game."

That is not something Iowa would or could ever aspire to. CCR named Iowa the second least corrupt place in America, trailing only Oregon. Head west across the Mississippi River, and you are transported from Sodom to the Celestial City.

Illinois could learn a lot from seeing how things are done in Iowa. But let's face it: We've been located right next door ever since Iowa became a state in 1846, and we haven't learned anything yet.

So what can we do? Stop trying to clean up Illinois and let somebody else do it, and that somebody is you. We propose that the honest, decent folks of Iowa annex us, vote out all our grifters, shysters, thieves, extortionists, bagmen, flunkies and mopes, and replace them with clean-cut, plain-spoken guardians of the public interest -- of which you have a surplus.

It's a win-win deal, giving each state what it currently lacks. We'd get good government and honest politicians. You'd get major league baseball, Lake Michigan, great airline service, restaurants that serve something fancier than meatloaf, and the kind of nightlife you can't find in Oskaloosa.

We're confident that given this opportunity to spread the blessings of Iowa to less fortunate souls, you'll do it out of the goodness of your simple, honest, cornfed hearts. And if that's not sufficient motivation -- well, we have some friends who could make it worth your while.