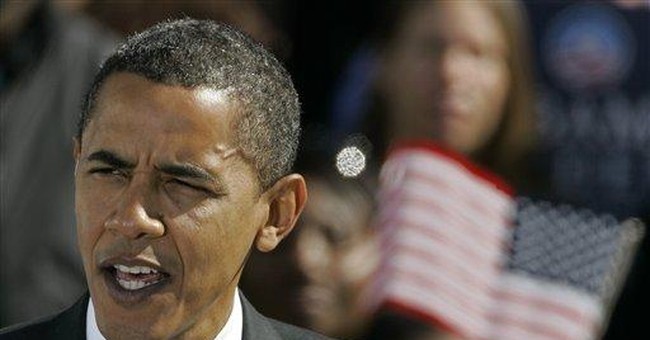 If you're at a Catholic shrine, it's a good idea to show respect for the Virgin Mary. In New York, a Yankees cap will make you look right at home. And among a Democratic crowd, you can never go wrong by lamenting the decline of the middle class and the stagnation of wages.

I don't have to tell Barack Obama. He makes a habit of claiming that "wages are shrinking," working families have lost ground and the country desperately needs his "Rescue Plan for the Middle Class." His economic program rests on the unshakable conviction that everyone except the wealthy is doing worse and worse all the time. If elected, he will find sympathetic ears among Democrats in Congress, where never is heard an encouraging word.

In the midst of alarming headlines, it's easy to persuade people that things are worse than they used to be. The only problem is that aside from the transitory effects of the current turmoil, they aren't.

Even on that front, things are better than advertised. For nearly a year, we've been told that the economy is on the verge, if not the thick, of a painful recession. But the traditional definition of a recession is two consecutive quarters of negative growth -- and we have yet to endure even one such quarter. In the second quarter, the economy grew at a brisk 3.3 percent rate, which is the opposite of what happens in a downturn.

Given all the fallout from the housing bust and the mortgage meltdown, things may look worse when the data emerge for the third quarter. But they won't change the actual long-run picture on how most people are faring in the modern economy -- which is much better than we have been led to believe.

That is not really surprising. Everywhere you look, you see Americans shopping and buying. Vast expanses of land that used to harbor corn or cattle now provide a home for shopping centers that go on forever. In 1988, Wal-Mart had 1,200 stores. Today, it has 3,800. Americans bought 24 percent more new cars and trucks in 2007 than in 1990.

All sorts of products that didn't exist a generation ago are now commonplace even in humble neighborhoods -- personal computers, cell phones, high-definition TVs, Polartec jackets, digital cameras, Starbucks coffee and more. If their incomes are steadily falling, how do Americans cart home so much stuff?

Terry Fitzgerald, a senior economist at the Federal Reserve Bank of Minneapolis, says the answer is simple. Far from declining, he writes, "the economic compensation for work for middle Americans has risen significantly over the past 30 years."

The mistake made by the School of Gloom is looking only at wages, narrowly defined. According to the Bureau of Labor Statistics, average hourly earnings of production and nonsupervisory workers, adjusted for inflation, fell by 4 percent between 1975 and 2005. But those figures deceive because they omit fringe benefits like health insurance, pensions and paid leave, which make up a bigger share of total compensation than before. The numbers also rely on a mismeasure of inflation.

When those flaws are corrected, a very different trend leaps off the page. Median wages, says Fitzgerald, rose 28 percent between 1975 and 2005. Nor were the gains restricted to Bill Gates and Hannah Montana: Significant gains occurred in the middle as well.

The same pattern holds for households. The figures that suggest families are struggling to stay even overlook some types of income, and they don't account for the fact that households have gotten smaller on average. After accounting for such things, Fitzgerald found that "inflation-adjusted median household income for most household types increased by roughly 44 percent to 62 percent from 1976 to 2006."

None of this alters the fact that some people have done worse. Domestic and global competition, which raise living standards, also spell trouble for many companies and workers. A 50-year-old who loses a $30-an-hour job on the Chevy assembly line may never find anything comparable. But the steady, broad rise in living standards makes it clear that -- at least until recent months -- our economy consistently spawns more good jobs than it destroys.

Thanks to American capitalism, ordinary workers and families are better off today than they were a decade or a generation ago. In the midst of scary economic times, that's a heartening fact to keep in mind. Even if certain Democrats would rather you didn't.

I Know Exactly Who Is To Blame for This New Wave of COVID-19, and I Know Who Is Making a Fortune on It
Townhall
This. Guy. GETS IT. --> Hardhat intellectual RAILS on societal ignorance (sheep?) over Biden, CDC recommendations, and forced vaxxing (watch)
Twitchy
Brett Kavanaugh's Gelatinous Spine Green-Lights More Government Theft
Redstate
Mexico's Turn: The Border Mess Is About to Get Much Worse
PJ Media