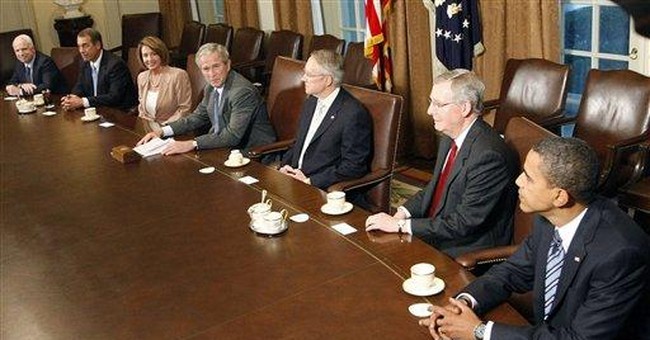 Sometimes bipartisanship is grounds for celebration, but more often it is cause for tears. Last week, congressional leaders from both parties went into a room to hammer out a plan that would put taxpayers on the hook for $700 billion. But they assert that the investment is essential to the health of the economy. And they insist that if we make this investment, we'll get all or most of it back.

This promise would be more believable if the federal government had a long record of using tax dollars responsibly. In fact, it's the equivalent of the guy who raids his kid's piggy bank to feed the slots. The most notable impulse of our leaders is spending money the Treasury doesn't have, piling up bills that future Americans will have to cover.

How do our leaders intend to pay for this massive new outlay? Not by raising taxes. Not by cutting spending in other parts of the budget. No, they will borrow the funds. The Chinese and other foreign investors will lend us money so we can keep the economy humming, which will allow us to make the payments on the money we already owe them.

The $700 billion comes on top of $85 billion it is lending to save the insurance company AIG. It's in addition to the $200 billion it put up for mortgage giants Fannie Mae and Freddie Mac. There may be more on the way.

Add it all up and you find that our government has suddenly run up a trillion dollars in new liabilities. That sounds like a lot -- unless you compare it with Washington's other outstanding commitments. Currently, the national debt stands at roughly $10 trillion, which is about three-quarters as large as our entire annual gross domestic product. But The Concord Coalition, a Washington-based fiscal watchdog group, says explicit and implicit obligations amount to $53 trillion -- "almost as much as today's net worth of all household assets."

Hear that? Everything you own is already spoken for.

With each year, government spending rises, and the budget deficit gets bigger. As the baby boom generation retires, the gap will grow. Given current trends, federal outlays stand to double between now and 2050, while revenues remain roughly stable.

By then, two programs -- Medicare and Medicaid -- will cost as much as the entire federal budget does today. Which means that, essentially, we'll be financing two federal governments. If you dislike carrying a defensive end on your back, wait till his twin climbs aboard.

Even the government admits this can't go on forever. A report from the Treasury Department says that without big increases in revenue, "Medicare, Medicaid and Social Security spending and the related deficit financing costs will far exceed the government's ability to pay."

When you spend more than you bring in, you have to borrow to cover the difference. In the next three decades, the government's official debt is on track to triple. But at some point, the Treasury predicts, "the world's financial markets would likely cease lending to the United States."

Then what? David Henderson, a research fellow at Stanford's Hoover Institution and editor of The Concise Encyclopedia of Economics, ticks off the options: We could close the budget gap by drastically cutting spending or raising taxes. The Federal Reserve could print a lot of money, reducing the real value of the debt and making it easier to pay off. Or the government could default -- in short, declare bankruptcy.

It may sound absurd to think the United States government would ever walk away from its debts. But if we are not willing to make painful sacrifices now, why would we be willing to make excruciating ones then? Inflation, says Henderson, is also unappealing because it would cause such pain here at home. Default would be more attractive to some Americans because we not only would escape our debt but also "would be screwing foreigners."

Once they have rescued the financial sector, maybe Henry Paulson and Ben Bernanke can answer the question that will eventually follow from this and other commitments: Who will rescue the federal government?