Stephen Moore
|
Posted: Oct 09, 2018 12:01 AM
Share   Tweet
The opinions expressed by columnists are their own and do not necessarily represent the views of Townhall.com. 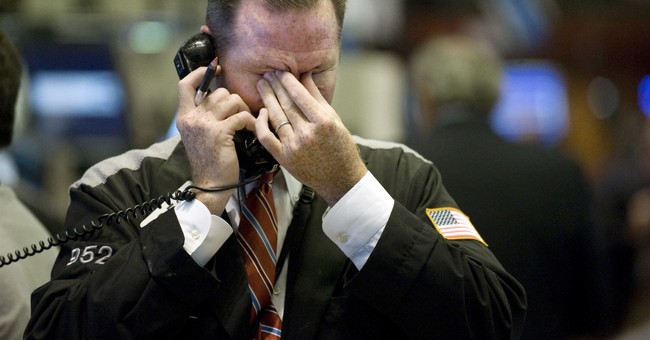 This month marks the 10-year anniversary of the housing market meltdown that led to the Great Recession. Is another crisis looming around the corner?

Hopefully not, but it is worrisome that a decade later Washington is engaged in the same derelict behavior that caused the crisis. Government agencies are still issuing taxpayer guarantees on more than 90 percent of mortgages -- many with less than 5 percent down payments. Yikes.

Worse, the biggest conspirators in the meltdown, the duopolistic credit rating agencies Moody's and S&P, which gave sterling AAA grades on these bonds up nearly to the date they collapsed into financial rubble, are still dominating 80 percent of the credit rating market. Why are they even still in business?

Throughout 2007 and 2008, these agencies encouraged investors to snatch up hundreds of billions of dollars of mortgage-backed securities. They told investors these mortgages were "virtually risk-free" and stamped them with AAA ratings. Thanks to this incompetence, millions of Americans lost their life savings, and America suffered one of the greatest financial disasters in our history.

Between lost shareholder wealth in the stock market and declines in home equity, the nation lost $10.2 trillion in 2008, roughly enough to pay off the entire national debt at the end of that year. After the fact, the government's official watchdog agency later called the bond rating agencies "essential cogs in the wheel of financial destruction."

This wasn't the first time. The rating agencies also failed to issue advanced warnings on the meltdowns and bankruptcies at Enron, WorldCom, Lehman Brothers, Bear Stearns and others. They are the fire alarm that never rings.

They still are. The Security and Exchange Commission's annual report issued in December 2016 found evidence of routine misbehavior and sloppy underwriting standards at the big bond rating agencies, yet again. Fortune reported that in 2015 the SEC charged Standard & Poor's with a $58 million penalty for fraud.

The SEC found that the rating agency "elevated its own financial interests above investors by loosening its rating criteria to obtain business and then obscuring these changes from investors." Nothing seems to change and no one at the SEC seems to do anything about the scandal.

One clear problem is that S&P and Moody's have a clear conflict of interest in that they rate the bonds of the very companies that are paying them to rate the bonds. This is like having college students pay the teachers based on the grades they give them.

The Financial Crisis Inquiry Report found investment banks frequently telling Moody's that if they don't like their credit rating, they will take their business down the street to S&P, and vice versa. They essentially pay for good credit ratings. That's the very definition of a racket.

What is desperately needed is a new model where the credit raters work for the investors and where there are many competitors to choose from -- rather than Tweedle Dee and Tweedle Dumb. To be fair, the SEC has allowed some added competition in the market, but not enough to put pressure on S&P and Moody's.

Consider the plight of Egan-Jones, a small ratings company in Haverford, Pennsylvania. They work for the investors, not the bond issuers. Egan-Jones was one of the first to sniff out the ticking time bombs of mortgage-backed securities that the others were saying were completely free of risk.

Egan-Jones also beat S&P and Moody's in downgrading Bear Stearns and Lehman Brothers before they became the first two firms to collapse in the wake of the meltdown. Egan-Jones beat the other rating agencies to the punch on Enron and WorldCom, too. And co-founder Sean Egan was named by Fortune magazine as the first person to warn others about the 2008 credit crisis. A great track record, right?

But in this strange line of business, the better your record in accurately predicting crises, the bigger a threat you are to the SEC regulators. The SEC continues to deny Egan-Jones the status of a credit rating agency, because they say that the firm violates its rule of a maximum of 10 percent revenue from a single client.

But if the rating firm is representing the investors, not the bond issuers, that rule makes very little sense. Investors don't have an incentive to hire a rating agency that will give them bad advice on the investments they buy. If investors want really bad advice, it's hard to find anyone to rival S&P or Moody's ratings.

The solution here is obvious. If SEC Chairman Jay Clayton wants to make capital markets more accessible to businesses and investors, and ensure that we don't have another 2008 financial crash, he should fix the credit rating agency racket by stopping playing favorites and forcing S&P and Moody's to compete against scores of smaller companies like Egan-Jones. If he doesn't act soon, he will put this wonderful Trump boom at risk. And, Chairman Clayton, we will all know who to blame this time around.

Stephen Moore is a senior fellow at The Heritage Foundation and an economic consultant with FreedomWorks. He is the author of "Trumponomics: Inside Trump's America First Strategy."