Stephen Moore
|
Posted: Sep 25, 2018 12:01 AM
Share   Tweet
The opinions expressed by columnists are their own and do not necessarily represent the views of Townhall.com. 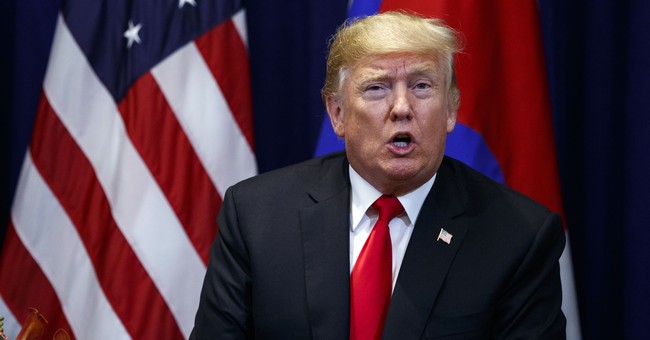 Even at this late hour, President Donald Trump can save the Republican Congress in November -- if they want to be saved. To understand how, we need to rewind back to this time last year.

That's when Trump made one of the few policy mistakes of his young presidency by failing to veto the $1.3 trillion omnibus spending bill. One of the Republican Congress' biggest mistakes was sending him that bloated appropriations bill in the first place. It has only demoralized conservative Trump voters -- the same group that hasn't been showing up in special election races this year.

These runaway all-in-one spending bills have left a wake of trillion-dollar deficits and have only reinforced the antipathy that conservatives feel toward Republicans in the upcoming midterm elections. Instead of buying votes, the lack of spending discipline by the Republican Congress has only reinforced a suspicion by voters that it doesn't really matter who's in charge: The budget keeps flying into the stratosphere.

In private, Trump has told his staffers that he wished he had vetoed that oinker bill last year, and he's right to feel like he got his wallet pick-pocketed. But now he will have a chance to redeem himself.

In a few weeks, Congress will again send to the White House a near $1 trillion bill that perpetuates the billions of dollars of deficit spending each day.

Most agencies will see budget increases. It again rams through the Budget Control Act spending caps by $7 billion. You know the bill was a sellout when it passed 93-7 in the Senate with almost all Democrats voting yes.

This is where Trump can save Republicans from themselves. For all the massive spending in this year's budget bills, what is not included is the necessary funding to build the border wall. Trump is livid and rightfully so. "I want to know, where is the money for Border Security and the WALL in this ridiculous Spending Bill, and where will it come from after the Midterms?" Trump tweeted in recent days.

If Trump has a mandate from voters for anything, it is building this wall to help secure our borders. Fulfilling this mandate is all the more vital given the madness of the immigration position of Democrats: sanctuary cities; catch and release; no voter IDs; abolishing ICE (i.e., having no border security at all.)

These policies are -- to say the least -- far away from where most American voters are on immigration. Conservative and centrist voters are much more in line with Trump's position: that a nation without borders is no nation at all.

This is a political fight that Republicans should be relishing on the eve of the election. Border security vs. no borders at all. Democrats are so in bed with a radical fringe that they are handing Republicans the issue of the decade on a silver platter.

Yet Republicans are huddled in the fetal position on immigration. The Washington Post headline from last week said it all: Congress "Tries to Delay Border-Wall Fight to After Midterms."

Huh? No this is a fight for the week before the midterms, not after. The issue paints with very broad colors the difference between the two parties on a seminal issue.

I have talked to Democratic political operatives who have conducted an in-depth autopsy on why Hillary Clinton lost the election to Trump. One of the most salient issues for Trump, they tell me, was immigration. Trump was tough; Clinton was weak and for the status quo.

Incidentally, Republicans should be for legal immigration. The "big beautiful wall" Trump wants to erect should also have big beautiful gates for immigrants to enter orderly and lawfully.

The last thing Democrats want on the eve of the midterm elections is to have to go on TV and explain why they won't vote for funding the government because they don't want Donald Trump to secure America's borders. And if House and Senate Republicans don't want to go to the mat on this issue, then Trump voters are probably right in asking: What's the point of having a Republican Congress?