Stephen Moore
|
Posted: Feb 13, 2018 12:01 AM
Share   Tweet
The opinions expressed by columnists are their own and do not necessarily represent the views of Townhall.com. 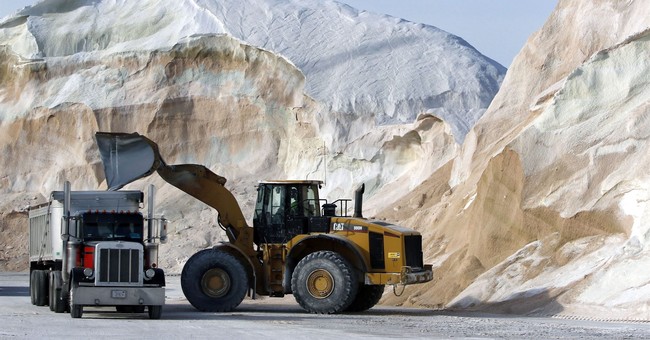 Why is the United States reliant on China and Russia for strategic minerals when we have more of these valuable resources than both these nations combined?

This has nothing to do with geological impediments. It is all politics.

This is an underreported scandal that jeopardizes American security. As recently as 1990, the U.S. was No. 1 in the world in mining output. But according to the latest data from the U.S. Geological Survey, the U.S. is 100 percent import dependent for at least 20 critical and strategic minerals (not including each of the "rare earths"), and between 50 and 99 percent reliant for another group of 30 key minerals. Why aren't alarm bells ringing?

This import dependency has grown worse over the last decade. We now are dependent on imports for vital strategic metals that are necessary components for military weapon systems, cellphones, solar panels and scores of new-age high-technology products. We don't even have a reliable reserve stockpile of these resources.

Fortunately, the Trump administration is working to reverse decades of policies that have inhibited our ability to mine our own abundant resources, mostly in the western states -- Montana, Colorado, Wyoming and the Dakotas. In December the Trump administration issued a long-overdue policy directive designed to open up federal lands and streamline the permitting process so America can mine again.

No nation on the planet is more richly endowed with a treasure chest of these metals than the U.S. The U.S. Mining Association estimates there are more than $6 trillion in resources. We could easily add $50 billion of GDP every year through a smart mining policy.

Environmentalists are threatening to file lawsuits and throwing up other obstacles to this pro-economic development mineral policy -- just as they oppose more open drilling for oil and gas. The stupidity of this anti-mining stance is that the green energy sources that they crave -- solar and wind power -- are dependent on rare metals to be viable.

Rare earth minerals are the seeds for building new technologies, and a strong case could be made that these strategic metals are the oil of the 21st century.

The suite of 15 primary minerals -- which the U.S. has in abundance domestically -- has been referred to as "the vitamins of chemistry." They exhibit unique attributes, such as magnetism, stability at extreme temperatures, and resistance to corrosion: properties that are key to today's manufacturing. These rare earth elements are essential for military and civilian use for the production of high-performance permanent magnets, GPS guidance systems, satellite imaging and night vision equipment, flat screens, sunglasses and a myriad of other technology products.

Thanks to hostility to mining, huge portions of public lands in the west have not been explored or mapped in nearly enough detail to satisfy the hunt for minerals. It takes seven to 10 years to get mining permits here, versus two or three years in Australia and Canada. The nation must also map and explore again as was done in the Old West, when mining for gold, copper, coal and other resources was common.

Mineral imports from China and Russia are providing enormous geopolitical leverage to these countries at precisely the wrong time in global events. China, Russia and others have used their mineral wealth to hold importing countries hostage. Do we want Vladimir Putin to hold the commanding heights on strategic minerals?

We need a change in strategy and philosophy when it comes to mining. For federal land development, the 20th-century philosophy of "lock up and preserve" needs to be replaced with an ethic of "use and explore." We have hundreds of years of these resources with existing technology.

China's leaders have been known to boast that the Middle East has the oil and China has the rare earth minerals. But that's false. We do. With a pro-mining policy, we can make America a mineral-exporting superpower, not an importer reliant on our adversaries. This strategy has worked like a charm when it comes to energy; it should be employed to yield the same America First results for strategic minerals.