Stephen Moore
|
Posted: Mar 07, 2017 12:01 AM
Share   Tweet
The opinions expressed by columnists are their own and do not necessarily represent the views of Townhall.com. 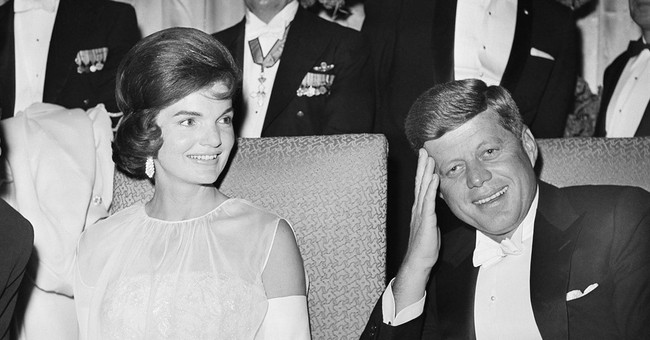 Imagine if in 1961 John F. Kennedy's advisers had told him, "We will never put a man on the moon." Or what if Ronald Reagan's advisers had assured the Gipper, "The Cold War is unwinnable. We should sue for peace." Actually, many naysayers told JFK and Reagan exactly these things. Fortunately, these presidents were visionaries. They asked: "Why not?"

Donald Trump seems to confront these nattering nabobs of negativism in the media and academia every time he announces a policy goal. "You can't build a wall." "You can't root out the waste in government." "You can't get Europe to pay more for its own defense." "You can never balance the budget." And on and on.

The one thing Washington is very good at is giving every excuse under the sun for why achievable things can't done -- which brings me to the revolt of the chattering classes against Donald Trump's goal of 4 percent growth and millions of new jobs.

The left and even some academics on the right claim that this is a pipe dream. CNNMoney recently asked leading economists about Trump's promise, and they found a strong consensus that 4 percent growth is "impossible, or at least highly unlikely." Even the latest 3 percent growth goal that Trump's budget team has projected was ridiculed. "Experts" point to a widely cited 2016 San Francisco Federal Reserve study that argues that the "new normal" is 1.5 to 1.75 percent GDP growth -- or less than half the post-World War II average pace of progress. Economists are sounding as myopic as the legendary patent office official who once proclaimed that everything that could be invented had already been invented.

In the 1960s, after the Kennedy tax cuts were implemented, the economy grew by about 4 percent annually for five years. In the 1980s, following the Reagan tax cuts, the economy expanded on average about 3.75 percent. Back then, economist Paul Samuelson, a Nobel Prize winner, declared that if the Reagan agenda were to produce high growth in outcome and jobs with declining inflation it would be "a miracle." That miracle happened. So why not now?

It's worth noting that when Barack Obama unveiled his Keynesian stimulus plans, the White House projected at least 3 percent growth nearly every year. He never hit 3 percent growth in a single year. I don't recall hearing the hoots of protest against his plans achieving "impossible" rates of growth.

One bogus argument for the new normal of slow growth is that the necessary growth in the labor force won't happen. It is true that baby boomers are retiring at a pace of 10,000 a day. But the notion that there isn't an available pool of workers to fill millions of new jobs is nonsense. The labor-force participation rate is the lowest it's been in three decades. There are 52 million Americans out of the workforce today (and that's excluding those who aren't working but are over the age of 65 or younger than 20). Meanwhile, many workers over the age of 50 have seen their jobs disappear and have resigned themselves to early retirement. We know that the unemployment rate is much higher than officially reported when we include the millions of Americans who have given up looking for work or can't find a full-time job.

We also know that there are millions of Americans on disability or other welfare programs who aren't working. This is because the benefits have become so easy to get that welfare and disability have become substitutes for work. Put time limits and work requirements on these programs for employable adults and the labor force will accelerate quickly.

Then there is the issue of productivity. Federal Reserve Vice Chairman Stanley Fischer declared last year that slow growth in "capital investment and productivity" are the forces "holding down growth." No, they aren't. Investment has been low for the past decade because of liberal policies that punished capital investment. We can hope that the war against business, started under Obama, will end with a peace treaty under Trump. We know that there are hundreds of energy projects ready to go, which Trump should greenlight in the months ahead.

I believe that America is just entering a new stage of massive productivity as we enter the Digital Age Part 2. Artificial intelligence and robotics could double the productivity of American manufacturing. New drugs, vaccines, medical devices and procedures from our biotech industry will cure or alleviate many debilitating illnesses that sap productivity.

We're also witnessing the advent of automated cars and planes. I predict that these will reduce transportation and shipping costs by roughly 75 percent over the next two decades, leading to massive productivity gains for businesses.

In other words, we are entering a golden age of productivity with never-before-imagined advances. We will produce more and more output, with fewer and fewer workers needed.

We get there mostly by getting the government out of the way. Trump wants to do that. And if he does, 4 percent growth can and should be the new normal in America.