The Right Way to Do Infrastructure Spending

Stephen Moore
|
Posted: Dec 20, 2016 12:01 AM
Share   Tweet
The opinions expressed by columnists are their own and do not necessarily represent the views of Townhall.com. 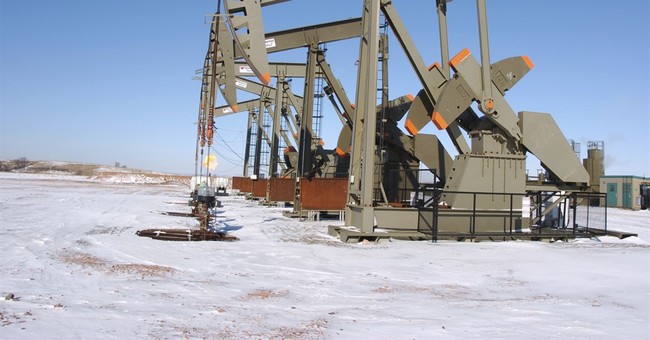 Back in early 2015, oil and gas company ConocoPhillips requested a permit from the Obama administration to launch an oil-drilling project in Alaska. The energy project, called the Greater Mooses Tooth development, is located within the National Petroleum Reserve and would create thousands of jobs in an economically depressed area of the state. The project has the full approval of the local community and poses little threat to the environment in a sparsely populated region.

It is a multibillion-dollar jobs-and-infrastructure project with roads and housing and pipelines. It won't cost the federal taxpayers a penny to build. In fact, the royalties from the project will likely raise hundreds of millions of tax dollars for the federal government and the state.

A no-brainer, right? Not exactly. For years, the Obama administration has tangled up the project in regulatory red tape. "We are ready to break ground on day one after we get the permit," a frustrated ConocoPhillips Vice President John Dabbar told me. "We're going to employ nearly everyone up there," he adds.  It still hasn't been approved, because Obama hates fossil fuels.

If Donald Trump is smart, he will greenlight the drilling project the day he enters office.

Now multiply this story by at least several hundred. The radical green agenda of the Obama regime has, for eight years, canceled, delayed, denounced and disrupted these types of smart energy, mineral and transportation projects all over the country. The value of these financially lucrative and job-creating initiatives -- such as the Keystone XL pipeline -- is in the hundreds of billions of dollars.

Think about that in connection with Donald Trump's promise of as much as $1 trillion for new infrastructure spending. I am always asked, "Where will the money come from to pay for these projects, given that the government is already running near-trillion-dollar annual deficits?"

We've all been looking at this the wrong way. Smart infrastructure investment in America doesn't require one penny of new federal spending. In fact, these projects can substantially reduce government borrowing and increase revenue inflows.

All President-elect Trump must do to unleash the mighty spending of private, for-profit enterprise is to give the companies and the localities the green light to build, to drill, to mine, to invest.

A new study by the Committee to Unleash Prosperity, written by former Interior Department energy expert Jackson Coleman, finds that the value of energy resources on federal lands could exceed $50 trillion. The federal leasing revenues and income tax receipts from developing these resources could reach $3 trillion.

The Obama administration has held up at least five transnational pipelines that could create tens of thousands of high-paying union jobs.

In the mountain states such as Montana, Idaho and Wyoming, dozens of major mining projects for urgently needed rare minerals have been bottled up by the federal regulators. Apparently, Obama would rather import these from resources from China.

Then there are coal plants necessary to secure our electric power supply. America desperately needs to build clean-coal-fired plants to ensure reliable electricity for our homes and businesses. Obama has shut them down while bankrupting the industry. We also need refineries and liquefied natural gas terminals to allow America to export more of our abundant shale oil and gas. Since we have the cleanest oil, gas and coal in the world, developing U.S. energy is positive for the global environment and reducing greenhouse gases.

There is one key distinction between private and public infrastructure spending. For-profit projects, by definition, must have a positive return on investment. Public infrastructure projects often have negative returns, because they generate so little revenue. Think of the $70 billion bullet train in California that will carry very few passengers. Would any private company in its right mind ever build this rolling white elephant? Or recall the "bridge to nowhere" in Alaska or the Obama "investments" in green energy projects that have gone belly up.

Sure, we need road and bridge and airport improvements. But that isn't what is holding back growth.

For seven years now the economy has severely underperformed because business capital investment -- in factories, equipment, computers, tractors, warehouses and laboratories -- has dried up. That's the real infrastructure crisis in America. Trump can fix that capital infrastructure deficit by simply giving permits to the myriad brick-and-mortar projects that will be privately financed, including the Greater Mooses Tooth development. In other words, we can solve the infrastructure problem and lower the budget deficit at the same time.