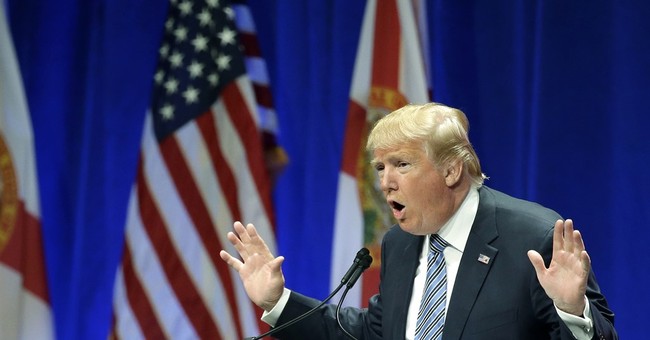 MILWAUKEE, Wis. -- Outside the massive Milwaukee theater, the venue of last Tuesday's fourth GOP presidential debate, were the noisy protesters marching for a hike in the federal minimum wage to $15 an hour. They held up signs that read, "Fight for $15."

Inside the great hall, Donald Trump, who boasts of having a net worth as high as that of many small nations, is asked by debate moderator Maria Bartiromo of Fox Business Network whether he favors raising the minimum wage. Of course, the only sane answer to that is no. The government shouldn't price low-skilled workers out of the job market. And Ben Carson was right that black teens are the frontline victims of minimum-wage hikes. This is economics 101.

Trump responded by saying, "I can't be." If only he had stopped there and moved on to some other subject, because his reasoning couldn't have been worse. He told working-class Americans that wages are "too high" and that's why we "can't compete."

Does Trump even fathom how hopelessly out-of-touch and callous this makes him sound? A billionaire who flies in a helicopter or a Learjet to work says wages for the little people who drive Mazdas are too high. Was he intentionally trying to chase middle-class blue-collar voters into Mother Hillary's waiting arms?

Next up was the other GOP front-runner, Ben Carson, who only got it half right. He sounded like Cruella de Vil when he opined that we need lower wages to bring down unemployment. Ugh. That may be technically true in the short term. But these two Republican front-runners completely flubbed this question, and it's one that isn't going away. They missed the opportunity to bash Obama's misery-inducing policies.

What they should have said is that wages are too low in America, not too high. Department of Labor data tell us about half of Americans haven't had a pay raise that keeps pace with inflation in eight years. There are many reasons for that abysmal record, but not the least of them are Barack Obama's tax, regulatory, borrowing, health-care and monetary policies. They have flattened the middle class and these workers deserve a raise.

But the problem here for the middle class isn't that the minimum wage is too low. For the umpteenth time: Only about 4 or 5 percent of workers are paid minimum wage, and most are only paid that for six months of less. Most people earning the minimum are below the age of 30 and work for restaurants or in retail. For 19 out of 20 workers the minimum wage is irrelevant.

The unions love to cite statistics on the growing number of Americans earning the minimum wage. Let's take them for their word on that. Isn't the fact that wages in America are so low for so many prima facie evidence that Obamanomics is an utter failure? Democrats do speak up for higher wages, but their policies lower them.

That is why Americans are so cranky right now. The median, or middle-class, wage isn't rising. Since the end of 2008 through the middle of 2015 government statistics show real weekly median earnings flat. That's the scandal.

Republicans should be educating voters about how to push those wages up. One way is better skills, for sure. Kudos to Sen. Marco Rubio, who gave us some straight talk and said America needs more welders and fewer philosophers. And as he correctly put it, "Welders make more money than philosophers." When are our so-called institutions of higher learning, which are supposed to be training millennials for the new economy, going to get that?

We also need businesses to invest more. More plants, equipment, machinery, computers and IT are needed. Why aren't businesses investing like they used to? Maybe it's because Obama raised the tax on business investment by 60 percent. When you raise the capital gains tax on investment, investment goes down, workers have less equipment to work with; they become less productive, and they get paid less. As Jack Kemp used to put it, if you're trained to operate a lathe, you're not going to get hired by businesses that don't have lathes -- unless you bring your own.

Mandated benefits, such as Obamacare, lower wages, too. And maybe I missed it, but not a single Republican trashed Obama for scuttling the Keystone pipeline. Those jobs pay $25 to $50 an hour. But apparently Democrats don't want those.

By the way, back in 2007 the Democrats in Congress raised the minimum wage in three steps. Poverty hasn't fallen. Teen unemployment skyrocketed even more than the national unemployment rate during the recession, and, most importantly, the middle-income wage flattened. It didn't work.

Conversely, Ronald Reagan never raised the minimum wage once. But in the 1980s expansion, the economy grew by 4 percent and worker compensation rose steadily. Reagan may have only been an economist from Eureka College, but he had an instinctive understanding of how the economy works.

Thankfully, Marco Rubio did get the minimum wage question right. "Here's the best way to raise wages," he explained. "Make America the best country in the world to start a business or expand an existing business." Free markets are pro-worker. Socialism is anti-worker.