No, We Don't Need a Gas Tax Hike 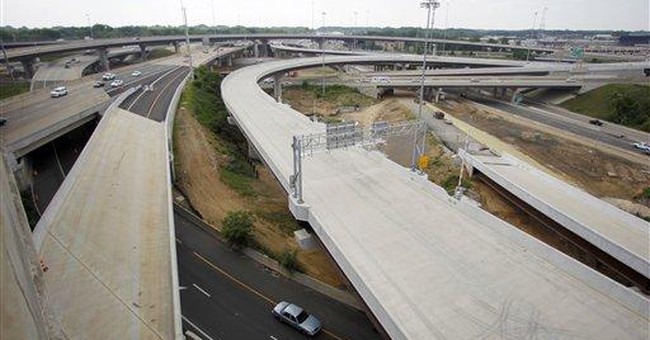 It's summertime and that means millions of Americans will soon be cramming in the minivan for family vacation. But Congress may soon be raising the cost of those trips by increasing the federal gas tax.

Why? The highway trust fund that finances our national highway system is running out of money. The 18.4 cents a gallon federal gas tax will raise about $34 billion this year, but that isn't enough revenue to cover all the spending Congress wants to do. The lobbyists in Washington -- including mayors, road builders, transit operators and civil engineers -- are demanding higher taxes as the only way to fix potholes and keep traffic flowing. I refer to this crowd as "the gas-tax guzzlers."

But here's the dirty little secret that motorists aren't being told: the so-called highway funding shortfall is a hoax. The federal gas tax raises plenty of money to finance the upkeep of the interstate highway system. From 1984-2012, the capital spending for roads and bridges rose nearly three times the inflation rate. If the infrastructure is crumbling and bridges are falling down, it's not because of too little money spent.

The problem is that Congress steals money from the highway trust fund to finance projects that have nothing to do with roads. Overall, about 20 cents of every federal gas tax dollar underwrites non-highway projects like mass transit, bike paths, high-speed rail and bus lines. Think about that the next time you plunge into a watermelon-sized pothole.

This year alone roughly $8 billion of highway trust fund money will be raided and used for mass transit projects. Funding rail and buses with the gas tax violates the principle that those who use the infrastructure should pay for it.

Critics of this plan say that motorists should fund transit projects because this reduces road congestion. In reality, so few Americans take transit to work today (only about 5 percent of commuters) that, except in a few large cities, transit has a de minimis impact on traffic gridlock.

Then there is the federal Davis Bacon Act that requires effectively a "prevailing wage" be spent on all federal road projects. This adds as much as 20 percent to the cost of building a road. We could get a free bridge for every five we build, if we could repeal this SOP to the unions.

If Congress would implement these two measures alone they could fully fund the interstate roads America needs.

Every study shows that the middle class is financially squeezed right now. The best rule of thumb is that every penny rise in gas prices at the pump takes about $1.5 billion out of the wallets of motorists. So a 10- or 20-cent gas tax will take about $15 to $30 billion from mostly working-class consumers. That's a massive negative stimulus to the economy at a time when wages have been stagnant for a decade in America.

No wonder that in Michigan this year, 80 percent of voters rejected a ballot initiative to raise gas taxes to pay for roads.

Proponents of higher gas taxes point to the fact that the federal gas tax hasn't been raised since 1993 and hasn't kept pace with inflation. That's true, but the federal funding peaked when the 42,000-mile national interstate highway system was just being completed. So the feds need less money now than 30 years ago. No one argues that we should be spending today what we did in the 1960s on the Apollo moon-landing mission.

What is true is that America needs more roads because congestion is getting worse over time and this is a clear economic drain on the U.S. The average American worker must work the equivalent of an extra week a year (37 hours stuck in traffic congestion) due to crowded roads and highways. That means building the roads we need and ending white-elephant projects such as California's $70 billion high-speed rail project that few Golden Staters will ever ride.

The bottom line: rather than raising taxes, Congress must insist that every penny raised by the gas tax is used to improve the roads in America. The gas tax is supposed to be a user fee to pay for roads. Right now it pays for Washington waste. The gas tax hike isn't about roads; it's about Congress making another bipartisan raid of taxpayers' wallets. Have a nice summer vacation.