Star Parker
|
Posted: Mar 28, 2018 12:01 AM
Share   Tweet
The opinions expressed by columnists are their own and do not necessarily represent the views of Townhall.com. 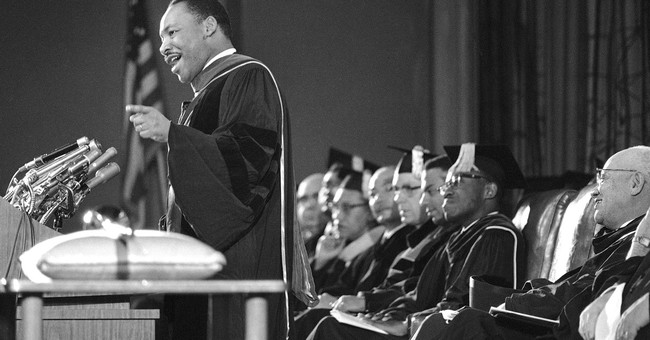 Covering the pro-gun control March for Our Lives in Washington, CNN ran a headline that read, "They're marching through the same streets as Martin Luther King Jr. did -- hoping for similar change."

The article then quoted a 16-year-old as saying, "The civil rights movement was started by teenagers."

How can we expect to properly deal with an issue as serious as guns and the Second Amendment when the media peddle such ignorance?

It should be sufficient to point out that Dr. King and Rosa Parks were not teenage activists.

But more seriously, it is critical to understand that this current movement to limit the ability of Americans to exercise their Second Amendment right to own a firearm is at total philosophical odds with what the civil rights movement aimed to accomplish.

The civil rights movement was about fixing what was broken in America regarding the ideals of individual freedom and dignity.

When King spoke his famous words at the National Mall in August 1963, his appeal was to perfect the American ideal. He called the "magnificent words of the Constitution and the Declaration of Independence" a "promissory note to which every American was to fall heir. This note was a promise that all men ... would be guaranteed the unalienable rights of life, liberty and the pursuit of happiness."

King's movement shone light on the fact that there was pain and suffering in the country because there were still Americans who were not free. That is what needed to be fixed.

Today's movement against guns and the Second Amendment aims in the opposite direction. The claim of this movement is that we have pain and suffering in our nation because we are too free. The marchers and others are telling us we can make a better nation by using the force of government to scale back our freedoms.

In a USA Today column, Obama-era Secretary of Education Arne Duncan and Dale Erquiaga, a former superintendent of public instruction for Nevada's schools, tell us: "Children should not have to pass through metal detectors to go to school. Nor should teachers have to arm themselves to keep students safe."

Is having children walk through metal detectors to go to school too high a price to pay to avoid scaling back our constitutionally guaranteed freedoms? Is having armed guards and/or armed teachers too high a price to deal with the costs and demands of our free society, as opposed to dealing with these challenges by choosing to use government force to scale back our freedoms?

Perhaps metal detectors and other measures to make schools more secure and less vulnerable to attack would play an important role in our educational process to help our young people understand that freedom is not free.

We have a young generation in our country today from whom we ask nothing for the privilege of living in freedom. The idea that part of living free is taking personal responsibility has become a concept alien to many of our young Americans.

We might recall the fall of 1957, when President Dwight Eisenhower federalized the Arkansas National Guard, which Arkansas Gov. Orval Faubus had used to block nine black children from entering Little Rock's Central High School to attend school. Eisenhower then sent in more federal troops to protect these black children and their right to attend this school.

Eisenhower, who had served as supreme commander of Allied troops in Europe during World War II, understood force and understood freedom. He said it would be "a sad day for this country ... if schoolchildren can safely attend their classes only under the protection of armed guards."

The nation watched aghast as federal paratroopers were deployed to Central High School. It was an excruciatingly difficult decision for Eisenhower, but in the end, he concluded that he had to do it "to preserve the institutions of free government."

Republicans might note Eisenhower's example and recall that in 1956, Republican Eisenhower received 39 percent of the black vote.