Star Parker
|
Posted: Aug 10, 2016 12:01 AM
Share   Tweet
The opinions expressed by columnists are their own and do not necessarily represent the views of Townhall.com. 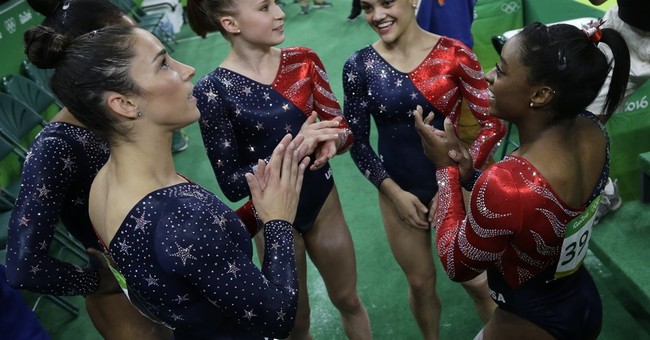 Gallup reports that the percentage of Americans expressing interest in the Olympic Games, which have just begun in Brazil, is way below the last four Olympics.

In the previous four Olympic Games, going back to 2000, when they were held in Sydney, Australia, Americans saying they planned to watch a "great deal/fair amount" of the Games averaged almost 59 percent. In the latest survey for the Games in Rio, that dropped to 48 percent.

What is going on? Why the relative apathy toward the Olympics spectacle?

One possibility is that this reflects continuing dissatisfaction and self-absorption by the American public and a growing cynicism about American involvement in international affairs.

There have, of course, always been international tensions.

I think this is exactly the point.

Today, Americans feel their own national identity being threatened. This is translating into growing hostility to immigration and involvement with international institutions and agreements.

In a March Bloomberg survey, 82 percent said they would prefer a product made in the USA rather than a product that is the lowest price. Sixty-eight percent said an American-owned factory employing 1,000 people would be better for their community than a factory owned by a Chinese company that employs 2,000 people.

Forty-four percent said the North America Free Trade Agreement has been bad for the U.S. economy compared to 29 percent who said it has been good.

The threat of terrorism is amorphous and global and, although there are nations, such as Iran, which are particularly problematic in promoting terrorism, the overall threat does not seem to be tied to any one nation. Terrorism transcends borders.

So the idea of the Olympics as a platform for promoting peace and goodwill among nations is particularly weak today, as many Americans do not see tension between particular nations as the major issue.

Perhaps the real excitement about the Olympics should not be focused on nations and politics, but rather individual excellence, character and performance.

Let's recall that it was exactly 80 years ago, in 1936, that that the Olympic Games were held in Berlin, hosted by the racist Nazi regime. A young black American sprinter, Jesse Owens, won four gold medals, bursting the racist political hallucinations of Adolf Hitler about white supremacy.

But it was not just the sickening Nazi ideology with which Owens had to contend, but also with the racism in his own country. As a student and star athlete at Ohio State, he could not live on campus because he was black, and when traveling with the team was restricted to "blacks only" restaurants and hotels.

Perhaps this is a time to cast an eye to the competition in Rio with the perspective that the athletes we see on the field, performing and giving all they have, are individual athletes striving for the gold. They achieve it because of their own character and determination. Not because of politics.

And, similarly at home, it will not be politicians or ideologues that will improve our lives, but rather individuals building character and working hard, achieving excellence against all odds.