Hillarycare Is Not the Answer 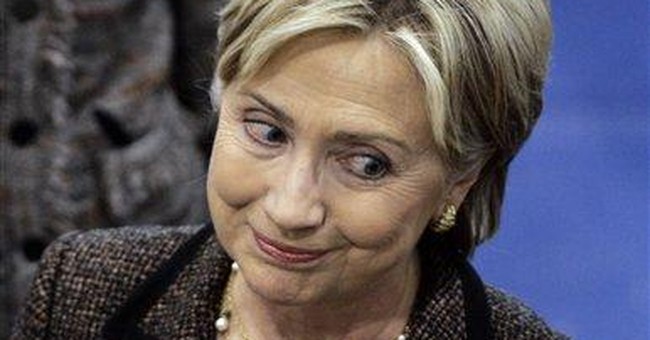 We'll set up a government bureaucracy to monitor and make sure you're cooperating. If they discover you haven't made the purchase, they'll go to your employer and have your wages garnisheed.

Let's assume further that total spending for this government-designed and -mandated product accounts for about a fifth of the nation's total economy.

No, this is the new Hillarycare. Sen. Hillary Rodham Clinton, D-N.Y., having once failed to explicitly nationalize the one-fifth of our economy going to health care, now wants to slip it past us by dressing it up in drag.

Her plan is to use a federal government mandate to force every American to buy health insurance. She claims it won't violate our freedom because if you already have a private plan that's OK. But a government alternative plan will be made available.

The government will regulate health care, define acceptable health insurance and force every American to buy a plan based on the government-established standard.

Her opponent for the Democratic presidential nomination, Sen. Barack Obama of Illinois, also wants vast government regulations and controls to define and price out health care. But Obama, who has the most liberal voting record in the U.S. Senate, grasps that, short of invoking a police state, it still must be up to consumers to decide to purchase health insurance.

This last point does not intimidate Clinton's Soviet-style affinities. When asked how purchase can be enforced, she told interviewer George Stephanopoulos, "We will have an enforcement mechanism. ... you know, going after people's wages."

Indeed, we have a problem in the delivery of health care in our country. Costs are going up at twice the overall rate of inflation, with increasing burdens on working families.

Why have health-care costs gone out the roof when the prices of just about everything else have gone down? Because health care already has become a highly regulated, highly bureaucratized industry.

If we want cheaper and more creatively delivered health care, we need less, not more, government.

According to Dr. David Gratzer of the Manhattan Institute, in 1960 about half of health-care expenditures were directly controlled by consumers. Today, it is about 15 percent. Over the same period in which consumers have relinquished control, per-capita health-care spending has quintupled and costs have skyrocketed.

When someone else is paying, individuals behave differently. In a recent book by Shannon Brownlee of the New America Foundation, "Overtreated: Why Too Much Medicine is Making Us Sicker and Poorer," she argues that up to a third of our health-care expenditures are frivolous and ineffectual.

Beyond the pure economic calculus lies the moral question of individual responsibility and freedom.

Last year, the pharmaceutical firm Merck unleashed a state-by-state lobbying campaign to get state governments to mandate that teen-age girls receive an expensive vaccine they developed to combat the virus that causes cervical cancer.

Deemed irrelevant was the fact that this virus is transmitted overwhelmingly through promiscuous sexual behavior. Those most at risk are poor black girls, so the costs would flip over to government (taxpayers).

The core behavioral problem, immorality and promiscuity, driving the poverty and risk of the disease is not only ignored but effectively subsidized.

Our health-care ills are symptomatic of our social ills. And our social ills reflect a society where the link between personal responsibilities and costs and personal rights and benefits has been largely severed.

Soviet-style mandates like what Clinton wants will simply dig the hole into which we are sinking deeper. The approach is morally repugnant, the antithesis of everything that a free society is about, and, like the former Soviet Union, does not work.

More individual freedom, choice and responsibility in both the delivery and purchase of health care is our only hope.