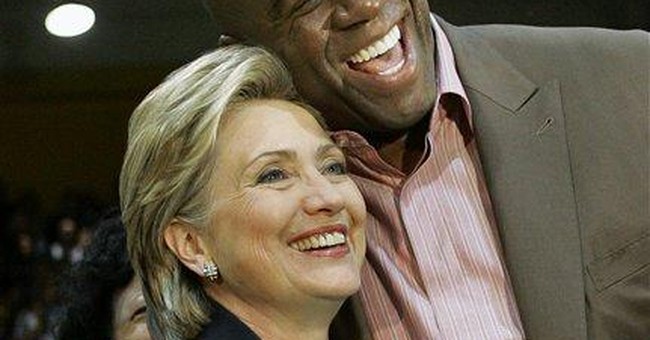 Sens. Barack Obama and Hillary Rodham Clinton, in their first one-on-one debate, in Los Angeles, were asked at the outset to distinguish themselves from each other.

The question was motivated legitimately by a sense that there is really very little difference between these two liberal Democrats.

Both noted a key difference in their approach to health care. Each wants extensive government regulation. But Clinton wants federal government mandates to force individuals to buy her plan and Obama rejects individual mandates.

This key departure in health policy hints at a far more fundamental difference in the mindsets of these two candidates.

Clinton's big-government liberalism is less rooted in liberal ideals than in the interest-group plantation politics that has defined the Democratic Party of recent years.

These differences in orientation were articulated well back in a famous keynote address given at the 1976 Democratic convention by a black congresswoman from Texas, Barbara Jordan.

Jordan made an appeal for a sense of national community that would derive its authority from citizens. She warned against what she called "the great danger America faces -- that we cease to be one nation and become instead a collection of interest groups."

It's evident that if a Democrat gets elected president, we will have our first woman president or our first black president. We're hearing a lot about the gender and race thing from Clinton, but not much about it from Obama.

It was Clinton who introduced race tension into the election. After Obama told a crowd in South Carolina at the time of Martin Luther King's birthday that the slain civil rights leader's crusade was not a "false hope," Clinton stepped in to point out that President Lyndon Johnson (the white patron) got the Civil Rights Act passed.

And then, of course, the senator's surrogate, husband Bill, minimized Obama's landslide victory in South Carolina as a black thing, pointing out that Jesse Jackson also did well there in 1984 and 1988.

When asked at the L.A. debate about immigration hurting blacks by depressing wages, Obama refused to take the bait. He insisted on addressing immigration as a national problem, of concern to all, and independent of the unique problems that are plaguing our inner cities.

Why does the black candidate want to keep race out of the discussion, and why has Clinton made such a point to keep it in?

Dick Morris opened speculation about this, pointing out that Clinton would use her inevitable defeat in South Carolina to her advantage by provoking white backlash with not-so-subtle reminders of race politics and bloc black voting.

And indeed, Bill Clinton followed the script with his reference to Jackson.

But there's much more to this.

Hillary Clinton is playing with black psyches as well as white ones.

Black consciousness has always been defined by a sense of vulnerability. The painful realities of black American history have always posed a barrier for many blacks to buy into American ideals or the American dream.

Moments, such as in King's famous speech, when he called "the magnificent words of the Constitution and the Declaration of Independence ... a promissory note to which every American was to fall heir," or Jordan's appeal in 1976 to transcend interest-group politics, have been, unfortunately, exceptional moments.

The more common political appeals to blacks have played on fears that the country is incorrigibly racist and that their only hope is to salvage a piece of the pie through political power and protection.

Nothing can be more threatening to these politics than a successful, talented black man like Obama running as an American candidate rather than as a black candidate.

But a black off the plantation is the last thing that Sen. Clinton wants. She wants blacks to feel impotent and vulnerable and in need of a political patron to hand them the goodies they need.

Nothing could speak more clearly to the differences than Oprah Winfrey coming out for Obama and Clinton rolling out Robert Johnson, founder of Black Entertainment Television, to speak on her behalf.

Winfrey is a mainstream success, with a daily TV audience of millions of women, mostly white. Johnson made his fortune through black sexploitation.

At a Democratic Party candidate debate last summer at Howard University, Sen. Clinton was asked about the prevalence of AIDS among young black women. Her response was to first attribute this to racism and then talk about government programs. Can anyone imagine her telling blacks the truth that the solution starts with responsible personal sexual behavior?

I certainly don't buy into Obama's liberalism. But I am not surprised one bit that so many see him as a breath of fresh air over Clinton's hacked plantation politics of fear, dependence and patronage.