How Protest Has Morphed Into A Dangerous Insurgency Movement

Sheriff David Clarke, Ret.
|
Posted: Jul 09, 2018 9:58 AM
Share   Tweet
The opinions expressed by columnists are their own and do not necessarily represent the views of Townhall.com. 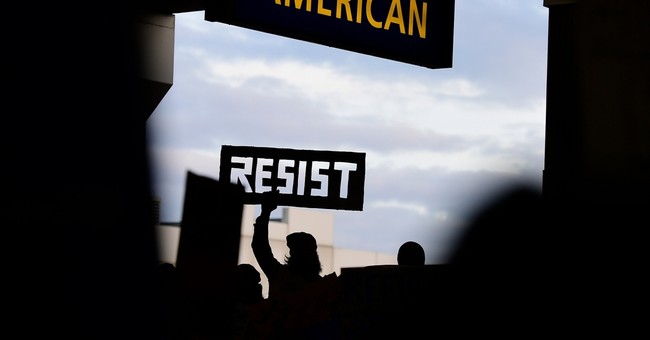 The left has politicized the separation of families illegally crossing the U.S. border. By framing the issue as President Trump's fault, they ignore the reality that two of his predecessors used the policy as well.

In response, Trump issued an executive order ending the separation of families, but this mattered not to the left. The left thought that overly politicizing this issue would energize their base for the November midterm election. The separations have ceased but the outrage from the left has not. They’ve now made a boogeyman out of the Immigration and Customs enforcement (ICE) agency, a typical tactic from Saul Alinsky’s "Rules for Radicals." They identify a target and personalize it as a symbol to rally around. Congressional Democrats have called for the abolition of ICE and since then people have blocked entry to the ICE office in Oregon.

Shutting down government operations and therefore inciting chaos is no small issue. It’s the objective of an insurgency. An insurgency is defined as a group of people who rise up in opposition to civil and political authority or against a lawfully established government. Now we’re seeing more of it from the radical left.

Many of the resistance movement and Antifa protesters are not just irrelevant, idealistic youth hoping for change. They are a group of organized and well-funded insurgents advocating for political violence. For example, the man who shot Congressman Steve Scalise illustrates that these activists can become an armed movement. They use fear and intimidation and have committed crimes such as arson, overturning statues, looting businesses, damaging government property and the like.

This insurgency is gaining momentum as of late because of the Supreme Court Justice Anthony Kennedy’s retirement. The resistance movement will resort to any means necessary to stop the nomination process. The incidents of aggression keep arising.

One man was recently arrested for threatening to kill the children of FCC Chairman Ajit Pai’s children over the ending of net neutrality. Another man was arrested for threatening to kill the children of Florida Republican Congressman Brian Mast. And a man was charged with threatening to kill Sen. Rand Paul and his family by chopping them up with an axe. The insurgent group Antifa recently attacked a Patriot Prayer rally in Oregon. News reports say police took knives and clubs off of them. One does not come to peacefully protest armed with knives and clubs. They are not an anti-fascist group, they are a borderline paramilitary revolutionary group. They show up looking for trouble and instigate confrontation if there is none.

This anger is being fomented by prominent members of the left including California Congresswoman Maxine Waters who encouraged her mob to harass and intimidate members of Trump’s Cabinet and their supporters. Filmmaker Michael Moore recently told people it was time to “rise up” against our duly elected president. He said that people had to put their bodies on the line. That is insurgency rhetoric. Hillary Clinton has announced that she is joining the resistance movement. Rise up and resistance are terms associated with an insurgent movement, not peaceful protest. There is a huge gap between what many want to call protesting and what is actually insurgent behavior. When people want to stop lawfully established government functions from operating, their behavior is then unlawful. Such behavior should be met with certain and severe consequences to deter and stop it. Taking over freeway systems not only halts government functions but interferes with a motorist’s right to use that public thoroughfare.

Not enforcing the law against rioters is a dangerous path to go down, and I’ve seen many law enforcement officials choose the direction as of late. Front line officers are ordered to not engage rabble rousers looking to instigate confrontation. Cops are showing up in soft appearances to avoid agitating the mob. When the crap hits the fan, however, these officers are in no way prepared to keep the peace.

Police have to live up to their sworn duty to serve and protect. They cannot be afraid to use all reasonable force to do it. Force is not supposed to be pretty, it’s supposed to be reasonable under specific circumstances. Regardless, its point is to be effective.

The current insurgency movement is well aware of the reluctance among many police officers to take pre-emptive measures to stop them before things spiral out of control. It’s time for law enforcement to go on the offense to prevent the loss of life.

It won’t be pretty if government displays an inability to maintain law and order and therefore leaves these situations up to the individual.