Shaun McCutcheon
|
Posted: Jan 07, 2020 8:42 AM
Share   Tweet
The opinions expressed by columnists are their own and do not necessarily represent the views of Townhall.com. 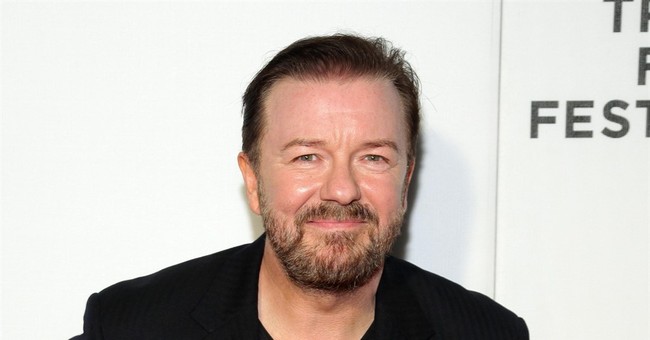 As Ricky Gervais roasted the Hollywood elite at the Golden Globes Award Ceremony Sunday evening, reactions from across the political spectrum trended all over Twitter and sparked unexpected conversations among viewers. The excoriating words shocked those in the Beverly Hilton and many more so-called entertainers who wished they could have been there – up until Gervais took control of the microphone anyway.

Having lived in their five-star bubbles and echo chamber of utopia for decades, the high rollers and numerous A-list wannabees were forced to hear the brutal truth about their political views, nobody cares! The comedian held a lighted mirror up to a self-righteous crowd of hypocrisy that regularly ignores its true colors – falling victim to their profession of fantasy until they have no idea of what is real or fake or if it even matters.

While many (especially conservatives) have applauded Gervais for his performance, and moreover, his candor, he did take one part of his message too far. He actually seemed to advocate that the performers who win suspend their First Amendment right to free speech in their acceptance remarks.

Gervais concluded his opening monologue by stating, “…So if you do win an award tonight, don't use it as a political platform to make a political speech. You're in no position to lecture the public about anything. You know nothing about the real world. Most of you spent less time in school than Greta Thunberg. So, if you win, come up, accept your little award, thank your agent and your God and f%*k off. OK?..."

While the majority of his remarks were true (and funny), he put this best dressed up group on censure notice. Hopefully none of the winners were actually discouraged from using their moments at the microphone the way that they had hoped and dreamed - like Trump would.

Everyone should be encouraged to share their ideas and opinions, no matter how extreme they may seem. A robust political dialogue can help everyone form better opinions. It is even more beneficial when guideposts can be established by others with unconventional ideologies, like Hollywood liberals. It’s the speech we don’t want to hear that often has to be protected.

Unfiltered award show nonsense, created and presented by the Hollywood elite, is actually a valuable contribution to the marketplace of ideas.  The winners (and losers for that matter) actually confirm how out of touch they really are by using an elevated platform to demonstrate they are uninformed and unaware of it – helping regular, rational folks make up our minds for ourselves.

Gervais was likely looking to stop the crowd from turning the show into another Trump bashing event in the same way the late-night talk shows, Saturday Night Live, and even much of the mainstream media has degenerated. However, just like they do – he took it too far by wanting to limit free speech.

By preventing or discouraging the dialogue, everyone will miss out on the political benefits and indeed some of the humor presented by those suffering from the highly contagious Trump Derangement Syndrome.

Free speech is a beautiful thing when exercised, be it at a podium, via megaphone, a rally, or even in a tweet. At the same time, it is also healthy to be a skeptic or critic of the opinions presented. Free speech is valuable when it can be taken seriously by an objective observer – and when it can be dismissed as nonsense too.

There is no doubt that the majority of the self-entitled Hollywood crowd has extreme opinions. It is the communication of multiple opinions that allows thoughtful people to make the best political decisions. There is a choice to join with the extremists, reject them, or even laugh at them as we form better opinions. Real free speech gets better ratings.

Gervais is a great comedian. His performance at the Golden Globes was entertaining and provocative – however, there is nothing funny about limiting free speech.