Seton Motley
|
Posted: Aug 16, 2016 12:01 AM
Share   Tweet
The opinions expressed by columnists are their own and do not necessarily represent the views of Townhall.com. 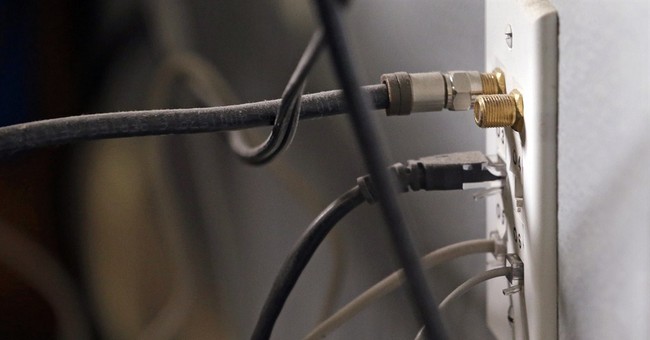 With all the attending awfulness you expect.  The laxness, the arrogance - the terrible performance.  (See: ObamaCare, the Post Office, “green energy,” your Department of Motor Vehicles,….)  And the willful denial of the fact that innumerable past failures - portend more of the exact same, should we be foolish enough to yet again try the exact same.

Get that?  “Public investments.”  Which means government investments.  Mrs. Clinton wants to spend $275 billion - and wants us to forget that President Barack Obama began his administration with an omni-directional-failed $787 billion “public investment” - the 2009 “Stimulus”:

“Despite decades of repeated failure, President Obama and Congress continue to promote the myth that government can spend its way out of recession.”

President Obama even admitted it stunk on ice.

But don’t let that stop you, Mrs. Clinton.  Not even on likely the most intricate of private sector enterprises - broadband Internet service.

Hillary Clinton Promises ‘Affordable’ Broadband for All by 2020 - Will It Be as Ironic as ObamaCare?: “Democratic presidential hopeful Hillary Clinton has come out to say that if she is elected, there will be ‘affordable’ broadband internet for all by 2020. If that sounds familiar, it’s because President Barack Obama did something similar during his campaign, signing the Affordable Care Act into law.”

Hillary Clinton Wants Broadband for All by 2020, Which is Impossible: “Connecting the entire US to broadband by 2020 is not realistic, and it’s not even one of those ‘if all the cards fall into place just right’ scenarios that could result in a miracle.”

Past is prologue, everywhere on the planet - except in DC.  Where Mrs. Clinton wants to launch us yet again upon the government money breach.

Tucked into the fatty, flabby folds of President Obama’s 2009 “Stimulus” - was $7.2 billion for wired government broadband.  How’d that go?

The Broadband Stimulus is an Abject and Absolute Failure: “(I)t has only made things worse….The purpose of the broadband stimulus…was to help provide broadband to areas that would otherwise go unserved or underserved….How far from this goal the stimulus has gone. Much of the money awarded…(is)n’t addressing these shortcomings….The states haven’t exactly done much better….Neither of these parties seems to be able to be held accountable to the public they are supposed to serve. Instead, they seem to be invested in promoting the status quo, rife with special privileges for incumbents and favored businesses.”

The $47 Billion Network That’s Already Obsolete: “The prize for the most wasteful post-9/11 initiative arguably should go to FirstNet—a whole new agency set up to provide a telecommunications system exclusively for firefighters, police, and other first responders. They would communicate on bandwidth worth billions of dollars in the commercial market but now reserved by the Federal Communications Commission (FCC) for FirstNet.

“FirstNet is in such disarray that 15 years after the problem it is supposed to solve was identified, it is years from completion—and it may never get completed at all. According to the GAO, estimates of its cost range from $12 billion to $47 billion, even as advances in digital technology seem to have eliminated the need to spend any of it.”

Mrs. Clinton is making broadband promises that would be impossible to keep under the best of circumstances - conditions government is utterly incapable of setting.

And using the exact same throw-government-money-at-it model that has already failed too many times to even count.

How very DC of her.