Seton Motley
|
Posted: Feb 16, 2016 11:42 AM
Share   Tweet
The opinions expressed by columnists are their own and do not necessarily represent the views of Townhall.com. 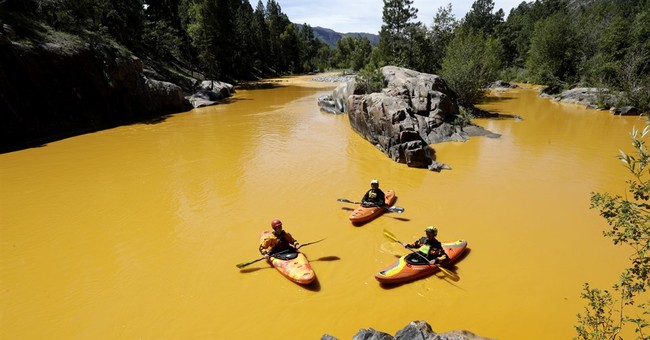 I have a (somewhat tongue-in-cheek) rule for federal government departments, agencies, commissions and boards: Barring a constitutional amendment, if a bureaucracy was created after 1800 it shouldn’t exist.

The Environmental Protection Agency (EPA) was created in 1970 - WAY past our sell-by date. Our nation got along just fine for nearly two centuries without this particular federal usurpation. Was the Constitution first amended to give the federal government the authority to override how 50 individual states each respectively decide how to handle environmental issues? Of course not.

Did Congress pretend to be a unilateral, illegal amendment process and pass legislation creating the EPA? Not even: “Pseudo-Republican Richard Nixon created the mess in 1970 in typical DC fashion. He pretended to be (a one-man Constitutional amendment process) - and signed an executive order. The Democrat-controlled Congress then pretended to be (two-thirds of the states) - and ‘ratified’ the EPA with committee hearings.…”

So the entirety of the EPA is constitutionally illegitimate. It is through this prism that we should examine its actions. Which are unilateral, authoritarian, bullying and amateurish. Time and again they grab more and more power and authority over our lives - all while failing miserably at the things over which they already lord.

The latest example of their awfulness? “An EPA official was caught red-handed with full knowledge of the danger of an environmental spill at Colorado’s Gold King Mine in emails discovered by the Denver Post, but the agency downplayed any knowledge of the hazard to the public. As 3 million gallons of lead, cadmium and other chemicals polluted the Animas River, the EPA pretty well tried to downplay the severity of that, too.”

An EPA screwup of MASSIVE proportions. Followed by an equally huge attempted coverup. And yet literally no one in government was fired for the fiasco. And does their fiasco stop them from abusing a business accused of a MUCH smaller error? Of course not: “On the same day when the Denver Post printed the story above, the Department of Justice announced the latest criminal sentencing in connection with the Elk River spill.

Get that? Six private sector employees and the company itself prosecuted - for spilling 0.0025% of what the EPA spilled. An EPA spill which resulted in zero bureaucrats prosecuted - or even canned.

The EPA can’t handle its business - but it sure as heck wants to man-handle ours.

And, of course, the EPA continues to unilaterally, illegally and omni-directionally expand its authority. But one such additional assault? “You want to kneecap farmers? And make food exorbitantly more expensive? Turn farmers’ water into a weapon against them.

“‘The issue is the EPA’s proposed changes to the Waters of the United States regulation. In March, the EPA and the U.S. Army Corps of Engineers proposed new rules that would expand the agency’s regulatory authority on streams and wetlands that feed into major rivers and lakes….

“‘(T)he rules…(would) allow the government to dictate what farmers can and cannot do with their farmland, which often includes small streams, ponds and marshes.’”

Given all we know - who do you think knows better how to treat and handle farmland? The farmers - who live and earn their living on it? Or faceless bureaucrats far removed from the land - and the consequences of their heinous actions?

We the People handle with care. Government man-handles with impunity.