Why I Vote "No" On the Stimulus 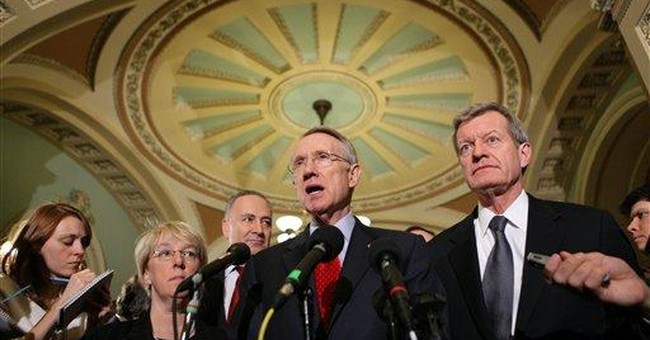 In one of history's more candid reflections, Henry Morgenthau Jr., Treasury Secretary under President Franklin D. Roosevelt, confessed, "We have tried spending money. We are spending more than we have ever spent before, and it does not work."

Just six years after crafting the New Deal, Morgenthau declared that efforts to create jobs and restore America's ravaged economy by expanding the federal government to unprecedented levels had been a failure. By Morgenthau's own assessment, the New Deal saddled our country with "as much unemployment as when we started ... and an enormous debt."

More than 75 years have passed since FDR signed the New Deal into law, and many noted economists are studying the Great Depression and trying to learn from the experience. In 2004, a team of UCLA economists concluded that the policies of the New Deal, which suppressed competition and kept unemployment in the range of 9 percent to 16 percent, actually prolonged the depression by seven years.

Amity Shlaes, an economic scholar and historian, has argued that the sheer "arbitrariness" of the New Deal exacerbated the crisis. The National Recovery Administration, the operative arm of the New Deal's competition code, failed to establish clear, actionable policies for businesses to follow. Some corporations got sweetheart deals while others were unduly penalized. As a result, businesses stopped investing in equipment, hiring came to a halt, and the markets froze. Many economists conclude that the New Deal fostered uncertainty, which was salt in the wound of the U.S. economy.

As in 1933, today our nation is confronted with an economic crisis that grows worse each day. The burst of the housing bubble and the subsequent credit crisis has badly impaired our financial markets. Many individuals and small businesses are struggling to get loans, and the home foreclosure rate is rising. Large corporations, once deemed "too big to fail," are teetering on the edge of insolvency. In December, the nationwide unemployment rate reached a 15-year high of 7.2 percent.

Some in Congress are rallying around a "solution" that sounds alarmingly familiar: spend more than we have ever spent before. Literally. And the nearly $900 billion stimulus measure that the House passed and the Senate will consider has many deficiencies.

First, the federal government doesn't have the money. Washington is running a record annual deficit of $455 billion, and that deficit is projected to reach an astounding $1.2 trillion this year. In addition, the gross federal debt is $10 trillion, or almost $33,000 per citizen. We're approaching a tipping point whereby creditors will be unwilling to buy government debt.

Second, even if we could afford it, this bill doesn't actually stimulate. With any stimulus package, our goal should be to swiftly pump money into the economy, create jobs and free up credit. The nonpartisan Congressional Budget Office, which analyzes the financial dimensions of legislation, estimates that only 64 percent of the funding in the Senate bill would actually be spent within the next two years. Market trends indicate that even without government interference the economy should begin rebounding on its own within two years, at which point "stimulus" spending would only add to our debt burden rather than help the economy.

Ultimately, this "solution" will result only in the accumulation of greater debt that will fall on the shoulders of our children and grandchildren while not providing what we need today. Moreover, it will leave us vulnerable to future economic challenges. A better proposal would emphasize tax relief so that individuals and businesses can have more capital to inject into the economy, thereby encouraging private-sector job creation. It would also guard against government expansion. In short, we should promote permanent private sector jobs, not a permanent increase in spending and debt.

I am eager to work in a bipartisan fashion toward a speedy and sustainable recovery. But we have to ensure that any stimulus package is balanced, reasonable in size, and targeted specifically to job creation, keeping people in their homes and overall economic growth. The plan before us lacks these objectives. What we have learned is that excessive spending may prolong a recession. Moving forward, we must carefully consider the spending decisions before us.