Bill Clinton Again Fails to Own Up to His Misdeeds

S. E. Cupp
|
Posted: Jun 06, 2018 3:30 PM
Share   Tweet
The opinions expressed by columnists are their own and do not necessarily represent the views of Townhall.com. 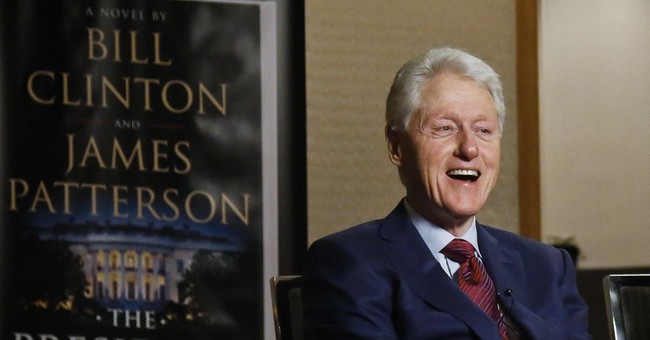 Turns out, the third time is not the charm.

Not for Bill Clinton, who took yet another attempt to explain his affair with then-White House intern Monica Lewinsky within the context of the current #MeToo movement.

Clinton admitted it "wasn't my finest hour," and insisted he was mad at himself as much as everyone else.

He said, again, that he apologized at the time to Lewinsky and her family.

Of course, that's not the point of any of these questions. We all know Clinton apologized; he did so publicly nearly two decades ago.

It's whether Clinton has revisited or reconsidered the incident -- or any of the other numerous allegations against him of sexual assault and rape -- since #MeToo shone a glaring spotlight on just how culturally corrosive and personally painful those experiences have been for victims.

As of yet, there is still no evidence that Clinton has gone through any of that soul-searching. There's no sense that any of the demands we've put on powerful men to examine their behavior and face consequences, at least in the court of public opinion, have gotten through his head.

Instead of putting what he did all those years ago in today's context -- acknowledging that he abused his power in taking advantage of a young employee, recognizing that it caused her pain and ended all chances of her leading full and normal life, and taking responsibility for trying to discredit her -- he made it entirely about himself.

"It was very painful thing that happened 20 years ago," he said. "I have had to live with the consequences every day since."

To be clear, those "consequences" might look pretty good to Lewinsky and his other accusers: racking up millions in speaking fees; enjoying the adoration of the most powerful people in the world and unfettered access to every powerful institution the world over; and getting handled with kid gloves by often too-kind and protective press.

This followed another bizarre and tone-deaf explanation Clinton gave at a TimesTalk event, wherein he decided the best way to defend his interview with Melvin was to discredit him.

"I should have remembered that man is young enough to be my son," Clinton said of Melvin, who is 39.

He continued, "I messed up, and I own that, and no mistake by anybody else -- including that young man aggressively saying I didn't apologize -- can justify the fact that I got mad when I should have been saying, 'I've got a chance to tell a whole new generation that the journey I've been on the past 20 years is one the country has to take, and that #MeToo is demanding we take it, and the sooner the better.' And that's what I think."

I bet those swipes at Melvin -- discrediting him as young and aggressive -- sound real familiar to Lewinsky.

One thing getting somewhat lost in the discussion is the idea that Clinton's, or any politician's, policies or good public works should somehow excuse or mitigate his bad private behavior. Clinton was quick to remind us he believes his policies were good for women.

"Here's the thing. I've spent a year now with President Clinton, and I went in liking him. But in that year, I've found he's just a wonderful, wonderful, wonderful human being, and he spent his whole life trying to do good things for his country."

What does one thing have to do with the other? It's, I'm sure, of no consolation to Lewinsky that Patterson finds Clinton to be wonderful, or even that Clinton has been a productive politician. Women see right through these kinds of head-fakes, and all they do is highlight just how out of touch men like Clinton and Patterson still are.

I've only here mentioned Lewinsky, not Paula Jones, Juanita Broaddrick or Clinton's other accusers, many of whom allege behavior that's far more serious, even criminal.

Clinton is on a book tour. These questions aren't likely going away any time soon. Let's just end the suspense right now: Clinton will never answer them correctly because he never thought he did anything wrong. He was indignant then, and he is indignant now.