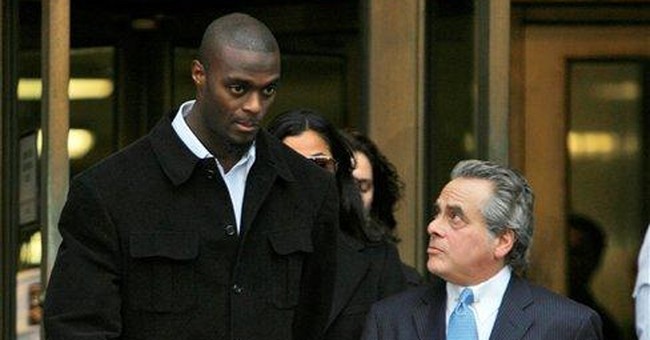 When I was younger, it was "Lifestyles of the Rich and Famous." Now, thanks to VH1 and MTV series like "The Fabulous Life" and "Cribs," we common folk are increasingly aware of the, well, fabulous excesses of celebrity living. Whether it's Kimora Lee Simmons's staggering shoe collection, Jerry Seinfeld's warehouse of collector cars, or the many international mansions of Brad and Angelina, it seems today's celebrity can have anything, anytime.

So why aren't some of them acting like it? New York Giants' star wide receiver Plaxico Burress was recently charged with criminal possession of a firearm after he accidentally shot himself in the foot in a New York City nightclub. The gun was unlicensed by the state of New York, where the shooting took place, and the license he had for the firearm in Florida had expired.

Burress said he needed the gun -- a loaded .40-caliber Glock, which does not have a safety -- for protection, as he was carrying loads of cash and wearing expensive jewelry to the nightclub. Fair enough -- millionaire athletes are understandably appealing targets of robbery and a number of high profile incidents have been reported in the last couple of years.

But with all his money -- Burress signed a five-year, $35 million contract this fall -- is it unreasonable to assume he can hire private security guards to accompany him on public outings? Is it really necessary for a celebrity like Plaxico to arm and protect himself, especially when doing so clearly puts him and those around him at risk of being accidentally shot in the foot?

Over the years, luxury living has birthed new cottage industries, giving way to personal shoppers, stylists, chefs, trainers, and travel concierges, the more successful of whom even have their own television shows now. Most Americans who aren't famous spend an inordinate amount of time devising intricate schematics often involving Venn diagrams and Pi to figure out how they will get the kids from school to soccer, pick up the dry cleaning, make the PTA meeting, get dinner on the table, wash the car and rake the leaves, while still finding time to squeeze in a shower.

But some celebrities make inexplicable decisions that seem to defy logic -- and their bulging bank accounts. It seems a day doesn't go by anymore when TMZ or Perez Hilton isn't reporting on a celebrity DUI or driving incident. Paris Hilton, Lindsay Lohan, Nicole Richie, Vivica A. Fox, Haley Joel Osment, Michael Phelps, Kiefer Sutherland, Heather Locklear, Mel Gibson, Joba Chamberlain, Shia La Boeuf...the list goes on and on of celebrities who didn't have the good common sense to employ drivers -- or take a taxi -- to make their night on the town safer for them and everyone else. What's the use of earning $12 million a picture or $1 million an episode if not to make life easier and safer?

Before Britney Spears' life was taken over by the California legal system and her conservator father, we watched her drive herself all over Los Angeles, seemingly to run mundane errands to grocery stores, drug stores and gas stations, making her life virtually indistinguishable from yours and mine, except that paparazzi would fiendishly tail her wherever she went. The madness resulted in a number of psychiatric detentions and the loss of custody of her two kids. If there were ever a case for drivers and security guards, this was it.

Clearly the decision to drive themselves, even if intoxicated, and arm themselves, even if illegally, isn't about money or means. It seems, rather, it's one of invincibility and entitlement. Athletes like Plaxico behave as if they are above the law, and have little problem throwing minions like us under the bus to keep it that way. He asked the New York City nightclub to let him in with his firearm, and asked the hospital that treated him not to report the incident. In what were bad decisions, both agreed, and could now rightly face charges themselves.

For years LA and New York City nightclubs have knowingly allowed underage celebrities to drink in their establishments. After the actor has consumed his weight in vodka, he teeters out the front door and the club valets usher him into the driver's seat of his waiting Escalade. The culpability lies with many, but the solution lies with one. Hire a driver. Hire a body guard. Problem solved.

New York City Mayor Michael Bloomberg said people like Plaxico Burress especially deserve prosecution because they are public role models. That's a lovely thought, but it's misguided. In theory a star wide receiver like Burress could make a great role model, but in practice, there's much evidence to the contrary. Foisting a role model mantle on a celebrity is often an arbitrary, preposterous, and incredibly disappointing exercise in futility.

Indeed, scolding Burress in an attempt to make him want to be a "better person" is the wrong tact, a waste of time, and, frankly, outside the jurisdiction of any elected official. I don't need or expect my celebrities to be saints -- I already have role models in my men and women in uniform, the tireless volunteers I know, childhood teachers and my parents. But I do expect my celebrities to throw their easily-earned money around in ways I cannot afford to do. Celebrities deserve prosecution for episodes like this precisely because they are celebrities -- and it's about time they started acting like it.