We Need a President, Not a Puppet Master

Sean Noble
|
Posted: Jan 15, 2016 12:01 AM
Share   Tweet
The opinions expressed by columnists are their own and do not necessarily represent the views of Townhall.com. 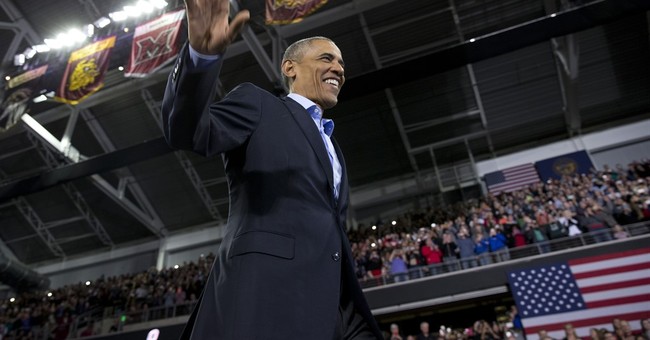 The biggest takeaways from the State of the Union were that about anyone could probably take some money from Paul Ryan in a poker game and that after seven years in office Barack Obama has become adept at expressing rancor with lofty prose, hasn’t learned much, and is resentful that he’s failed (and it’s everyone else’s fault)].

The White house claimed Obama’s last SOTU would be positive and optimistic. And, the language, the actual words, were positive: the promises brought by these times of change; “always extending America’s promise outward to the next frontier”; “a thriving private sector is the lifeblood of our economy”; “that’s the America I know. That’s the country we love. Clear-eyed. Big-hearted. Optimistic that unarmed truth and unconditional love will have the final word.” Real shining city on a hill stuff—except that it wasn’t. The entire address seethed with bitter anger, arrogance, and finger pointing.

He opened the speech discussing the dichotomy of rapid change, “amazing medical breakthroughs, but also economic disruptions that strain working families.” In the next paragraph, he didn’t directly call out the GOP primary contenders, but it was clear that’s who he had in mind when he spoke of “those who told us to fear the future; who claimed we could slam the brakes on change, promising to restore past glory if we just got some group or idea that was threatening America under control.” To argue that America should head in a different direction from that in which Obama and the Democrats want to take us is backward and futile, because, according to the president, their vision is the inevitable future.

At every point in the speech, Obama painted opposing views and differing opinions as laughably wrongheaded, backward, and held by people undeserving of respect. “I told you earlier all the talk of America’s economic decline is political hot air. Well, so is all the rhetoric you hear about our enemies getting stronger and America getting weaker.” This line received an audible gasp as American sailors are in Iranian hands, North Korea just conducted a nuclear test, and terrorist, ISIS-inspired attacks on Western soil dominated the headlines for the past few months. But, with an arrogant “full of hot air,” Obama dispenses with his would-be critics—he says it is so, and thus, it is so.

At the end of his speech, Obama, apparently blissfully unaware of his culpability, made a call for us to “fix our politics” and humbly noted “there’s no doubt a president with the gifts of Lincoln or Roosevelt might have better bridged the divide.” I don’t know if they could have, but I doubt they’d spend an entire State of the Union pulling the sides of the divide farther apart and then chastise the entire audience—to include American voters—saying “but democracy does require basic bonds of trust between its citizens. It doesn’t work if we think the people who disagree with us are all motivated by malice, or that our political opponents are unpatriotic. Democracy grinds to a halt without a willingness to compromise; or when even basic facts are contested and we listen only to those who agree with us.” The president, it appears, has had the good fortune of not hearing himself speak for the past seven years, or even for the forty minutes or so preceding this line.

The difference in our philosophies of government was made ever more clear to me in Obama’s understanding of the phrase “we the people.” He said “Our constitution begins with those three simple words, words we’ve come to recognize mean all the people, not just some; words that insist we rise and fall together.” But that’s not what the words “we the people” insist. They insist that power resides with the people, not the president or federal government, “we the people of the United States, in order to form a more perfect Union…do ordain and establish this Constitution for the United States of America.” They weren’t creating a commune; they were creating a free republic.

The president and his party disregard this most fundamental principle. They believe that it’s the job of the government to oversee us and pull the puppet strings so we the people rise and fall in unison. They come to believe they know better than we and attempt to plan and meddle in every aspect of our lives. With a straight face, they make absurd statements like, “And this year I plan to lift up the many businesses who’ve figured out that doing right by their workers ends up being good for their shareholders, their customers, and their communities, so that we can spread those best practices across America.” Funny thing about best practices in business, if government stays out of the way, they tend to spread themselves—it’s been happening for over two centuries in this country without Barack Obama’s stewardship.

We the people, deserve a president, not a puppet master. Let’s hope we get one in November.