A Tale of Two Shootings 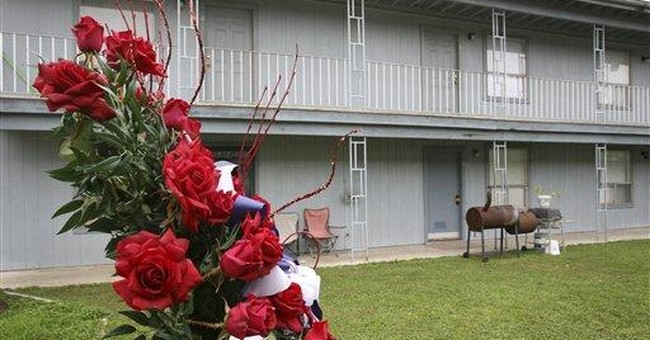 Obama's remarks upon hearing that abortionist George Tiller was shot--- "I am shocked and outraged" contrasted with his statement on the news that 12 unarmed soldiers were gunned down at Ft. Hood Army Post: "I would caution against jumping to conclusions" about the motives of the gunman.

Obama’s Homeland Security Secretary Janet Napolitano says her Department is now working to deflect any backlash against American Muslims following Thursday's rampage by a Muslim soldier. This is the same Napolitano that issued a report earlier this year cautioning against the domestic threats of “right-wing extremism” and right-wing groups that might use issues such as abortion as a recruiting tool. Were Obama and Napolitano concerned about backlash against pro-life advocates in the wake of Tiller being shot? It turns out that there was reason for concern, though you would not know from the mainstream media but pro-life activist James Pouillon was murdered with virtually no media attention just a short time after the massive coverage of Tiller’s murder.

The media, except for Fox News Channel and very few others, played right along with Obama’s Fort Hood narrative, failing to mention reports that the Army Major Nidal Hasan screamed “Allahu Akhbar” as he murdered more than a dozen and wounded over thirty other unarmed soldiers. Imagine the media’s coverage and the Obama Administration’s outrage if the man who shot late-term abortionist George Tiller had yelled “Hail Mary” as he shot Tiller.

US Army Chief of Staff, General George Casey further promulgated this bizarre approach on the Sunday talk shows saying, “I am worried…that this increased speculation could cause a backlash against some of our Muslim soldiers.”

So far there have been two incidences of Muslims murdering their fellow soldiers in the peaceful confines of a military base or encampment. There is not one single solitary incident of a non-Muslim soldier shooting an American Muslim soldier to date. So why is it that when a Muslim shoots dozens of his fellow American soldiers Obama, Casey and the media are concerned for Muslim soldiers?

It would seem that the non-Muslim soldiers are in more danger than our Muslim soldiers. We’re now allocating resources to try to protect Muslim soldiers that would be better spend shifting policy to try to prevent any similar incidents from occurring. And of course we will be told that we must recognize the importance of sensitivity to Muslims in the military, after all, many of them are translators for the languages spoken by the radical Islamist enemy. I don’t suppose it would occur to General Casey that if Islamist soldiers would murder their fellow non-Muslim soldiers that they might also sabotage the translation of documents and communications of the enemy.

The real problem with our government and military’s handling of events such as this is that it is further evidence that they simply do not understand Fourth Generation Warfare, the type of non-military tactics the jihadists are using against us. If we recognize this act of internal treachery for what it clearly and obviously is, an Islamic jihad attack from within our own ranks, then we deny the enemy a propaganda victory. We can deter them from claiming Americans “are turning on their own” which allows them to recruit more Islamic extremists to carryout these attacks.

When the first Islamic attack occurred in the 101st Airborne Division by Sgt. Asan Akbhar, many warned of the enemy within. I was one of them in an April 2003 article in Insight Magazine I quoted former Assistant Secretary of Defense Frank Gaffney stating "If [extreme] Islamists have infiltrated into the [armed] services it is a matter of grave concern because, by definition, Islamists are engaged in advancing an agenda that is inimical to this country and what it is and what it stands for, and its security most especially."

The Islamic jihadists who are waging this war against America want our soldiers to not feel safe where they sleep; the tragedy is that our own military and civilian leaders may allow them this great success.