Scott Walter
|
Posted: Mar 05, 2020 12:01 AM
Share   Tweet
The opinions expressed by columnists are their own and do not necessarily represent the views of Townhall.com. 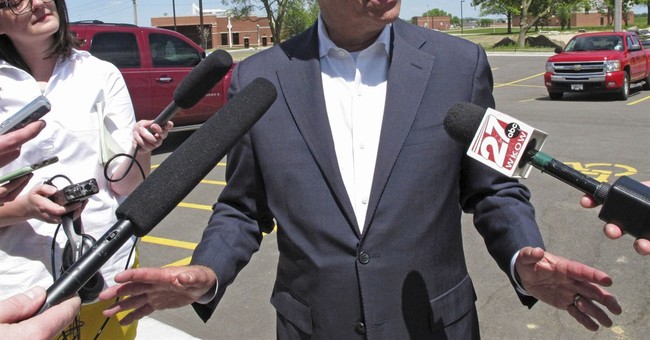 A big-name politician is taking over a leading group for liberal lawyers:  Russell Feingold, the former Senator who gave his name, along with Sen. John McCain’s, to the last major campaign finance reform bill.

As Feingold assumes leadership of the American Constitution Society, he steps into a firestorm that’s brewing over the Federalist Society, the leading lawyers’ group for conservatives, which faces growing assaults.

Why attack the Federalist Society? Because one of its leaders has played a significant role in weakening the power of liberal judges to impose their will on the rest of us.

Since at least 1953, when Earl Warren became Chief Justice of the U.S. Supreme Court, activist judges have often violated their constitutional duty to leave law-making to the people’s representatives who are elected to the legislative and executive branches. Instead, judges have legislated from the bench, forcing their policy preferences on the rest of us.

Supporters of this judicial malpractice face a challenge: Most Americans agree with the traditional, limited understanding of judges’ role. That’s why liberal nominees to the Supreme Court like Elena Kagan and Sonia Sotomayor know that to be confirmed, they must promise Senators they won’t legislate from the bench.

Americans’ passion for this view of judges is so powerful that it significantly boosted Donald Trump’s 2016 campaign for President. Since then, he has successfully placed over 190 judges on the federal courts who have insisted, with more believability than Kagan and Sotomayor, that they will not confuse judging with legislating.

The Left isn’t pleased by that, so it’s attacking persons who’ve led the fight to install those judges. A top target is Leonard Leo, who recently stepped down from his longtime post as vice president of the Federalist Society, which champions neutral judging.

The most insidious assault has been launched via an obscure entity known as the Committee on Codes of Conduct of the U.S. Judicial Conference, which is weighing a “draft opinion” that urges judges not to be members of the right-leaning Federalist Society or the left-leaning American Constitution Society that Feingold will head.

For now, the Committee says its ethics antennae aren’t ruffled if judges merely attend events at either Society, so long as judges are not actually members. Supposedly, judges’ non-membership will avoid the appearance of partisanship. But if the Committee were genuinely concerned about partisanship, it would fret about its member John J. McConnell Jr., because he’s a longtime political donor to and ally of Sen. Sheldon Whitehouse (D-RI), one of the Federalist Society’s loudest critics and himself a fierce partisan. Judge McConnell has shown his partisan colors by donating, along with his wife, almost $700,000 to Democratic candidates in his prior life, when he was a trial lawyer.

Legal expert Ed Whelan notes that the Committee eschews transparency and prefers to operate in the dark: it doesn’t even post its membership. You’ve almost certainly never heard of it, but you can easily see how the Federalist Society’s enemies hope to exploit it: they will cite the Committee’s “opinion” and claim that any association with the Society renders a nominee unfit to be a judge.

“Are you now or have you ever been a member of the Federalist Society?” will be the McCarthy-like cry.

This intolerance is especially ironic, because the Federalist Society is famous for the diversity of views it welcomes to its meetings. Perhaps Sen. Whitehouse would like to impeach Supreme Court Justice Stephen Breyer, who signed up to offer his non-conservative opinions at the Society’s very first meeting in 1982? (A family emergency kept Breyer from speaking.) Countless other leading liberal thinkers have joined the open debates the Society sponsors, including Nadine Strossen, longtime leader of the ACLU, and Jamin Raskin, former general counsel of the National Rainbow Coalition, who praises the Society for its “open-mindedness and liberalism”!

The most obvious bias in the Judicial Committee’s “draft opinion” appears when it claims no partisanship problem arises for judges who belong to the American Bar Association, which it treats as if the group represents all American lawyers, when in fact only around 14 percent of lawyers are members, down from 50 percent in 1979.

Worse, the ABA is notorious for its partisanship. It actively lobbies on numerous hot-button issues like immigration and abortion and also files amicus (“friend of the court”) briefs in support of numerous cases that affect public policy, almost always pushing the liberal side. As Ed Whalen reports, it even has a Grassroots Action Center that works to mobilize the public “to send messages directly to your elected officials”—for instance, “Tell Congress the Border Needs Help.”

In stark contrast, the Federalist Society in all its decades has never filed so much as one amicus brief nor spent a penny on lobbying, yet the Judicial Committee wants to suppress its open and balanced activities.

The Committee doesn’t even care about the collateral damage its draft opinion would do to other left-wing legal groups besides the American Constitution Society. Also in the blast zone will be groups like the National Association of Women Lawyers, the National LGBT Bar Association, and many more.

As Carrie Severino of the conservative-leaning Judicial Crisis Network observes, the logic of the draft opinion would go even further and “wreak havoc on judges’ ability to connect not only to the legal profession, but also to the institutions of faith, education, and community.” Severino means that the draft opinion, if adopted, could end up endangering a lawyer who’s a member of a Jewish denomination that once joined an amicus brief, or who’s spoken at a university that lobbied on any issue, or who’s participated in a community group that expressed an opinion on a ballot initiative.

Obviously, in a free country lawyers and judges should be free to associate with others and to make their cases in public through whatever organizations they like. I don’t want to silence groups like, say, the Hispanic National Bar Association, or dash its members’ hopes of being made federal judges. It’d be nice if the Judicial Committee showed the same respect for the Federalist Society by calling off its dishonest attack.

Scott Walter is president of the Capital Research Center in Washington, D.C.