Scott Rasmussen
|
Posted: Jun 14, 2018 12:01 AM
Share   Tweet
The opinions expressed by columnists are their own and do not necessarily represent the views of Townhall.com. 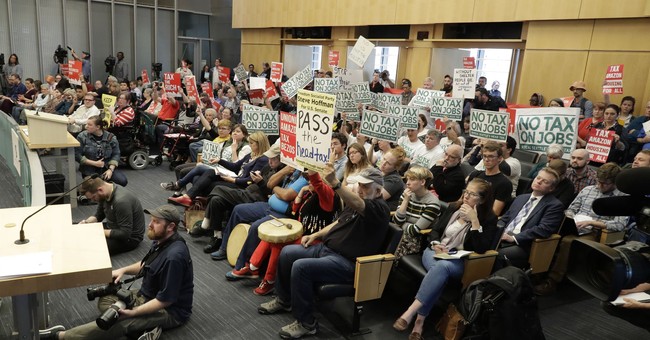 Political leaders often talk as if the right to vote is our most powerful tool for holding government accountable. Voting is important, but its impact is limited by an electoral process that protects incumbents and offers voters few meaningful options.

Fortunately, as the Seattle City Council learned recently, there are other ways to hold politicians and governments accountable.

The Seattle politicians passed a law requiring big companies to pay a special tax for every person on the payroll. This "head tax" was the brainchild of a socialist council member Kshama Sawant. She apparently reasoned that big companies like Amazon had enough money and should be forced to kick in a bit more for the good of the city.

While that may have sounded good to progressive political activists, the councilwoman didn't seem to consider the reality that Amazon could hire people anywhere. The giant employer didn't have to stay in Seattle and many citizens worried that the new tax would lead to fewer jobs in the city.

Quickly, petition signatures were gathered, the issue was placed on the November ballot and the city council surrendered. With voters set to repeal the tax on their own, seven of the nine city council members decided to cut their losses rather than endure a five-month debate highlighting how out of touch they were.

The key to understanding this reversal is recognizing that citizens have more power as consumers than we do as voters. Cities and towns must constantly compete for residents, employers, and jobs. That competition places great constraints on the power of local government officials.

The concept of using consumer power to hold governments accountable was first seriously developed in 1956 by Northwestern University's Charles M. Tiebout. He compared the act of moving or failing to move to the typical consumer decision-making about whether or not to buy a particular product.

Looked at this way, when we choose a place to live, we are "buying" a mix of lifestyle benefits, and the "price" we pay is determined by housing costs, taxes, regulations and other factors. If the costs go up or the benefits go down, we might initially try voting in a new team to fix the problem. After all, it's a bit of a hassle to move. But, if the prices keep going up or the services keep going down, we can simply move to greener pastures.

In Seattle, residents quickly recognized that the "head tax" would make it harder for the city to retain and attract quality jobs for its citizens. Had it not been repealed, many Seattle residents would have followed the jobs and moved elsewhere.

There's a larger lesson here as well. People who mistakenly believe that voting is our most powerful tool for holding government accountable misunderstand how society is governed. They believe governing a city or a society is the responsibility of government alone.

Nothing could be further from the truth. We need a pragmatic all-hands-on-board approach that draws upon family, community groups, businesses and government to allplay a role in governing society. Each of us has a role to play.

As citizens, we can most powerfully influence the governing process by our decisions about what to walk away from... and what we walk twards.