What If Roy Moore Wins?

Scott Rasmussen
|
Posted: Nov 23, 2017 12:01 AM
Share   Tweet
The opinions expressed by columnists are their own and do not necessarily represent the views of Townhall.com. 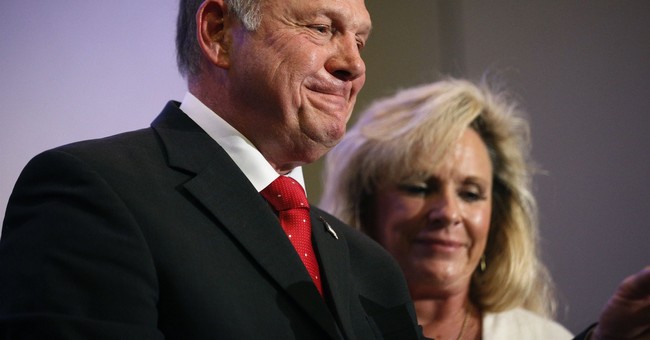 When Donald Trump appointed Alabama Senator Jeff Sessions to serve as Attorney General, it was widely assumed that his permanent replacement would be a Republican. But the scandals and allegations surrounding Republican nominee Roy Moore have challenged that assumption.

It would be a stunning turn of events for a Democrat to win in a state Donald Trump won by 28 percentage points. If that happens, as I noted last week, Democrats might win control of the Senate in 2018.

But what would it mean if Roy Moore wins?

A few things are pretty obvious. First, it would indicate that the Democrats have no realistic chance of winning anywhere in the South. The toxicity of the Democratic brand in rural states might also indicate problems for Democratic Senators running for re-election in West Virginia, Indiana, Missouri, North Dakota and Montana.

Second, a Moore victory would be further proof of how little credibility the national media has outside of the political class. Many who are troubled and offended by Moore are also troubled and offended by the apparently partisan behavior of the Post. Why didn't the left-leaning paper report Moore's problems before the Republican primary? If they had done so, Moore wouldn't be the GOP nominee and the Democrats wouldn't have a chance.

Third, it would also show the complete rejection of the Republican establishment in Washington. Mitch McConnell and his team did everything possible to block Moore. If the tarnished candidate wins, it will be because running against both national Republicans and the national media is a potent strategy.

But the deeper implications of a Moore victory, however, would be to again show that voters grade politicians on an ethical curve. No matter what the offense, voters assume that others in office have done the same or worse.

This goes to the core of the dispute between voters and the political elite. The elite view themselves as noble public servants whose wise leadership is needed to move the country forward. They believe politicians should be role models for society to follow. Most voters find such a job description laughable. Instead, politicians are generally viewed as mercenaries or brokers sent to do a particular job.

This was clear in 2016 when Donald Trump won 87 percent of the evangelical vote. It's not that evangelical voters approved of President Trump's lifestyle or thought he was one of them.

Instead, they recognized that one of the most important tasks of a president was to appoint people to the Supreme Court. Many evangelicals believe that Hillary Clinton would appoint Justices hostile to religious liberty and Trump had promised to do the opposite. In other words, they voted for Trump so they could get someone like Neil Gorsuch on the Supreme Court.

If Roy Moore wins, it will be with the votes of many people who find him reprehensible. They will not be voicing approval of his behavior but sending him to do a job in the political swamp. Some will hold their nose and conclude that voting for Moore is a necessary evil. They will vote for him to help repeal Obamacare, reform taxes, cut spending and deal with immigration.

For many Alabama voters, electing Moore may be seen as a lesser evil than giving Democrats control of the U.S. Senate.