Scott Morefield  |  Nov 15, 2021
The opinions expressed by columnists are their own and do not necessarily represent the views of Townhall.com.
Top Columns
Trending on Townhall Media 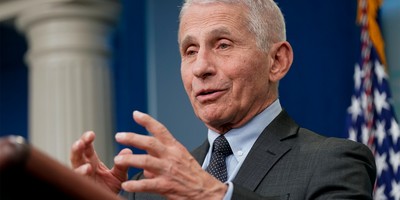 A tremendous part of the enormous frustration felt by an ever-growing segment of the population over the past nigh-on two years is rooted in the fact that little if anything about the actions the powers-that-be have taken in response to the COVID-19 pandemic has ever made any logical or scientific sense. When even a layperson like myself can time and time again drive a semi-truck through the ‘reasoning’ put forth by our overlords to justify their ridiculous measures, the fact that the insanity still continues virtually unabated is a testament to the magnitude of their evil grip on the psyches of far too many.

Ever true to form, the seemingly endless logical absurdities contained within the Occupational Safety and Health Administration’s workplace vaccination mandate, released earlier this month, came as no surprise to any of us over here on Team Reality. It’s carefully worded, to be sure. Clearly, well-qualified attorneys wrote that 490-page monstrosity fully expecting legal challenges to ensue and hoping their crafty verbiage would head some of the pushback off at the pass. Yet, it would seem, even the most carefully applied lipstick cannot possibly dress up this pig. And if you take the 5th Circuit’s words at face value - "give cause to believe there are grave [emphasis mine] statutory and constitutional issues with the Mandate …"- any *sane* court isn’t about to buy what they’re selling.

Now I’m not a lawyer, and I don’t even pretend to be one on Townhall. Nevertheless, even a lowly columnist like myself can pinpoint several gaping logical discrepancies in OSHA’s mandate. Here are a few of the most flagrant violations:

(1.) The mandate purports to "protect" employees at companies with more than 100 workers from the "grave danger" posed by COVID-19. Assuming that's true (a BIG assumption, I know), wouldn't the "danger" faced by workers at smaller companies also be considered at least equally as "grave"? Yes, there are reasons cited, such as the potential difficulty small companies would have implementing these measures. However, aren’t we talking about a "grave danger" here? If a small company had a vat of boiling oil in the middle of a warehouse floor where workers could easily fall, would OSHA accept that they can’t afford to build guardrails around it as an excuse?

(2.) If the danger posed by this virus at work is so "grave," why does it take effect four months from Biden's original announcement and two months from the mandate's publication? Did the virus promise to take a breather while this is all being sorted out? Maybe it’s sort of like how, you know, it only spreads while people are walking around restaurants and not sitting maskless at tables, or at night and not during the day? I mean, this is a "GRAVE DANGER" we’re talking about here, right? Aren’t we supposed to believe people are dropping dead all over the place, or something?

(3.) COVID-19, this "grave danger," is virtually everywhere, spreads mostly in households, and most everyone will likely be exposed to it at some point if they haven't already. As such, this isn’t even close to a work-specific issue that should be addressed by OSHA. Have we had similar mandates for the flu or any other communicable disease? Short of mandating HAZMAT suits, how are workplaces supposed to stop a virus anyway?

(4.) The mandate considers all "vaccinated" people the same and doesn't require boosters for those vaccinated more than 6 months ago, even though the latest science has shown that these vaccines wane significantly over time. In other words, if you got the shot before May 2021, you are, for all intents and purposes, unvaccinated. Yet, the low-IQ powers-that-be consider you "vaccinated" for the purposes of their ridiculous mandate.

(5.) The mandate doesn’t take into account occupation and risk levels. For example, is the risk of contracting Covid in a sparsely populated office environment the same as that in, say, a crowded poultry processing plant? Of course not, yet an unvaccinated, unmasked office worker with an open door and nobody else around within 50 feet is technically out of compliance with the mandate’s masking requirement.

(6.) The mandate calls for punitive measures - weekly testing and workplace indoor masking - for the unvaccinated only, despite the fact that the vaccinated can still contract and transmit the virus even during the few months in which it actually helps with potential deaths and hospitalizations. Logically, if the vaccine is masking symptoms which would otherwise force the infected to stay home, the vaccinated would seem more likely to spread the virus asymptomatically. But neither this mandate nor any other aspect of public health policy takes this into account.

(7.) The masking and weekly testing are portrayed as "incentives" (read: punishments) against choosing to remain unvaccinated, almost as if OSHA knows they don’t actually prevent anything. Our medical overlords have always portrayed masking as 'source-control,' not 'protective' to the wearer. Yet, the mandate purports to "protect" unvaccinated workers by forcing THEM to wear masks. If, as they state in the document, they really wanted to "protect" the unvaccinated, and they sincerely believe masks will do that, why do only the unvaccinated have to wear them?

(8.) The mandate ignores and even completely and summarily dismisses natural immunity, despite the dozens of studies that show that immunity from prior infections is both durable and long-lasting. This is patently absurd and completely unscientific. Yet our overlords, here and elsewhere, continue to marginalize those with natural immunity, ignoring both the lifelong protection such immunity likely offers as well as the fact that the prior infected are more likely to suffer severe adverse reactions to the vaccines. (That's right. Far from 'protecting' us, they are actively trying to HURT us.)

(9.) The mandate is generally unenforceable given its broadness and the level of intrusion and micromanaging involved. However, the enforcement that does take place will employ "whistleblowers" (read: snitches), meaning disfavored areas and companies will likely bear the brunt. Selective enforcement has always been a useful tool of the left, and we’ll have it here in spades. If you liked Lois Lerner's IRS, you're gonna love what's coming!

(10.) Finally - and this is an overall Biden administration criticism - workers are forced to be vaccinated or be punished, but illegal immigrants, welfare recipients, and other ‘favored’ groups are given a pass. Some "grave danger"!

Last week’s victory in the 5th Circuit is but the first salvo in a long battle to come. The enemy has made it clear they aren’t about to give up and intend to push this all the way. With this mandate, the Biden Administration and OSHA have declared all-out political and legal war on red states. This is violence. This is tyranny. And if the Supreme Court ultimately lets it stand, red states should respond in kind, together, nullifying the nonsense and daring the feds to enforce. Yes, it’s that serious. If we don’t stop this, worse, far worse, will come.