Scott Morefield
|
Posted: Oct 18, 2021 12:01 AM
Share   Tweet
The opinions expressed by columnists are their own and do not necessarily represent the views of Townhall.com. 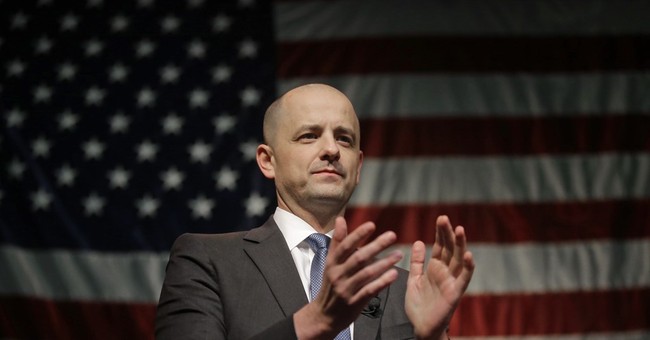 Former Republican New Jersey Gov. Christine Todd Whitman and Miles Taylor, a former chief of staff at the Department of Homeland Security who wrote the infamous “anonymous” New York Times 2018 hit piece criticizing former President Donald Trump’s leadership, bleated out an op-ed for the Times last week titled, unironically, “We Are Republicans. There’s Only One Way to Save Our Party From Pro-Trump Extremists.”

That “one way,” Whitman and Taylor argue, is to ally with Democrats in 2022 to defeat Republicans they feel have become too aligned with Trump and “Trumpism,” or the populist message he espoused.

“Rational Republicans are losing the party civil war,” they write. “And the only near-term way to battle pro-Trump extremists is for all of us to team up on key races and overarching political goals with our longtime political opponents: the Democrats." To this pair, Democrats may have a few bad policies, but they also “agree on something more foundational — democracy.”

We cannot tolerate the continued hijacking of a major U.S. political party by those who seek to tear down our Republic’s guardrails or who are willing to put one man’s interests ahead of the country. We cannot tolerate Republican leaders — in 2022 or in the presidential election in 2024 — refusing to accept the results of elections or undermining the certification of those results should they lose.

To that end, concerned conservatives must join forces with Democrats on the most essential near-term imperative: blocking Republican leaders from regaining control of the House of Representatives.

The authors - charter members of the ‘neverTrump Republican’ cult - go on to lend support to creepy Deep State plant Evan McMullin - a former CIA officer whose quixotic attempt to derail Trump in 2016 failed miserably - in his equally quixotic Senate campaign against Republican Utah Sen. Mike Lee. Elect Democrats and/or a small set of anti-Trump Republicans, they ‘reason,’ and the country can begin the path of purging itself from the noxious, insidious scourge of Trumpism.

Predictably, Whitman and Taylor don’t bother wasting space describing the specific policy differences they have with Trump and his supporters. Had they done that, they may have been bothered to explain why exactly so-called ‘Republicans’ support open borders, factories moving to China, endless foreign wars, and an Australian-style Covid-police state (probably). Instead, they continued beating that January 6 dead horse, peddling false narratives about ‘insurrection,’ fair and honest elections, and the ‘murders’ of Capitol Police officers while ignoring the fact that the Biden administration is turning the United States into a socialist, third world hellhole quicker than any of his most conservative skeptics could have possibly imagined.

Ever true to form, Twitter helped their screed along last week, the link prominently aligned with the words “Democrats in 2022” trending for much of Tuesday. But this time, I suspect even the formidable powers of Big Tech won’t help with what’s coming. With President Joe Biden’s poll numbers sinking to all-time lows seemingly every week and increasingly more people waking up to the fact that the Democratic agenda is clearly leading to economic and social disaster, it’ll take a lot more than a handful of woke, hand-wringing “former Republicans” to bolster short-term Democratic prospects.

Pointing to Democrats’ cynical but successful long-game demographic transformation of the U.S. into various factions of competing socialist-leaning voter blocs, I’ve long predicted electoral disaster for Republicans regardless of repeated Democratic policy failures. And while that may eventually happen, surely few could have foreseen just how low the left - with an addlebrained President Puddinhead as their puppet - would take this country. Which means, barring some unforeseen, earth-shattering event, the GOP is primed to make serious political hay starting in 2022 and hopefully 2024 as well.

Speaking of 2024, you might make the mistake of thinking someone like me, who has been openly critical of the idea of another Trump run, would find some common ground with people like Whitman and Taylor. But in truth, we couldn’t be more polar opposites if we were standing on the North and South poles. For me and millions of others, Trump was a vehicle to espouse and implement key policy positions that provably make life better for the vast majority of Americans. Yes, he was self-centered, reckless, caustic, and his own worst enemy most of the time, but his personal faults paled in comparison to the daily lives of countless millions who are now being openly harmed by Biden’s toxic, unworkable, unsustainable policies.

For them, on the other hand, Trump represented a threat to the status quo, specifically the Deep State’s iron grip on power. We can’t have ‘America First’ when our overlords despise ordinary Americans, and so that movement had to be destroyed, any reference to it tarnished with the blight of “Insurrection!” and whatever “isms” they are constantly droning on about. While these people definitely hate Donald Trump, they clearly hate his policies, and his supporters, more than anyone could possibly imagine.

Thankfully, Republicans - even most ‘Establishment’ ones - understand that Trump and those “Trumpism” policies are the keys to winning in 2022 and beyond, so they at least pay lip service to that fact, a lip-service neverTrump ‘conservatives’ strongly resent. Even with all his faults, the former bombastic, egotistical, bull-in-a-China-closet president managed to move the Overton Window in a real way, and for that we owe him a huge debt.

Yet, many if not most Republicans don’t want to see another Trump run, and I don’t either. I firmly believe it’s time for the former president to pass the torch to the next generation of America First conservatives willing and able to carry it - not because of anything Christine Todd Whitman, Miles Taylor, and smarmy Lincoln Project grifters have to say, but because doing so would give conservatives our best chance at victory, and saving the country.

Truth be told, anyone claiming to be Republican but using Trump’s faults and the January 6 “Insurrection!” to align themselves with Democrats don’t deserve to be taken seriously. Because Trumpism, with or without Donald Trump but hopefully with his help supporting a new torchbearer, is the only hope to restore the America we once knew and loved.