Scott Morefield
|
Posted: Feb 15, 2021 12:01 AM
Share   Tweet
The opinions expressed by columnists are their own and do not necessarily represent the views of Townhall.com. 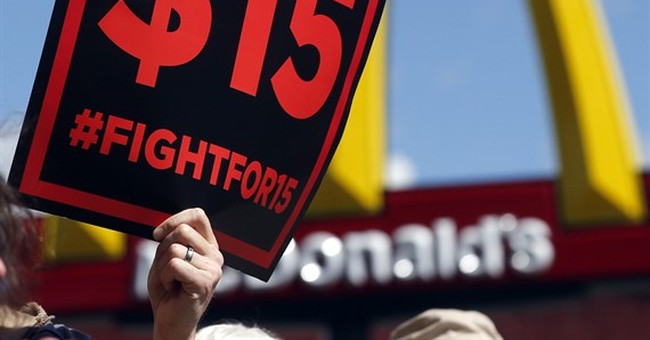 President Joe Biden and Democrats are hellbent on force-feeding a $15 minimum wage increase on the entire country, and thanks to the legislative voodoo known as budget reconciliation, it’s entirely possible they could succeed. It’s hard to imagine anyone actually for this having taken a community college Econ 101 class at any point in their lives, but the truth is, Democrats likely know good and well the damage such a measure will do to the nation’s already fragile economy, yet they stubbornly insist on doing it anyway. Why? Far be it from me to speculate on the impure motives of these ghouls, but my guess is it has something to do with power and revenge - you know, the sort of stuff that has motivated most evil people throughout human history.

Power, because giving something away, in this case, a raise, is always going to cause recipients to be indebted to you. It’s been the Democratic Party playbook for decades, except the best part about this particular ‘giveaway’ is, they don’t even have to ‘pay’ for it. They get the credit while small businesses bear the brunt. And revenge, because the economies that will be the most negatively affected by this are generally located in deep-red areas, and what better way to punish dastardly Trump voters en masse than to wreck their economies, right?

Granted, the idea of forcing employers to give struggling families a pay raise SOUNDS GOOD, in theory at least. Why shouldn’t everyone be able to work hard and earn a “living wage” for their efforts? The problem is that markets, not bureaucrats, are the only entities capable of correctly deciding what wages should be relative to the overall economy. That’s because artificially manipulating one important piece of an economy consisting of billions of moving parts is bound to have negative effects on everything else. What are those negative effects? Here are five, just for starters.

It will destroy jobs

The Congressional Budget Office estimates that upwards of 1.4 million jobs will be lost if the minimum wage goes to $15 per hour. The reason isn’t difficult to ascertain. When the price of something is artificially increased to unreasonable levels, users of that ‘something’ will figure out ways to consume less. Entry-level jobs that once employed inexperienced high schoolers will disappear, either to automation or heaping even more responsibilities on overworked salaried employees. Factories that once employed low-skilled workers will either be forced to shut down or move overseas where the price of labor is lower. Businesses will never start because the high cost of labor adds to already expensive start-up costs.

It will hurt low-skilled workers

Ironically, the very people that Democrats claim they want to help are the ones who will be the most negatively impacted. After all, lawyers, engineers, doctors, and computer programmers will all have plenty of work, at least until Democrats succeed in destroying the rest of the economy. No, the jobs that will be lost are the ones low-skilled workers depend on not just for an income, but as a stepping stone to better jobs in the future. They are literally ripping the bottom rung out of the employment ladder, thus making it more difficult for people to climb on.

It will cause inflation

This isn’t rocket science, folks. When the price of production increases, the item being produced will inevitably cost more. From restaurants to retail to everyday services, get ready to pay more for everything that can’t be exported from China.

The rich will get richer

As my boss at the Daily Caller, Neil Patel, aptly pointed out during an appearance on “Tucker Carlson Tonight’ last week, giant, multi-national corporations like Amazon, Target, and Walmart can easily afford and absorb any increase in the minimum wage. Their small business competitors, however, often cannot. Which is likely why we’re seeing so many large businesses supporting the “Fight for $15,” not because of any desire to do good, but as a way to weed out the competition. As a compromise, Patel interestingly suggested a larger minimum wage for large corporations and a smaller one for small businesses. But Democrats, sadly, are rarely interested in compromise.

It will hurt red states the most

So far, the only place in the country with a $15 minimum wage is the District of Columbia. How are things going there economically? The next highest is California at $14, then Washington at $13.69. Blue states overwhelmingly have adjusted their minimum wages upward, but their residents more than pay for that with a tremendously high cost of living. Shocking the economies of well-run red states with low costs of living by more than doubling their minimum wage is tantamount to economic homicide - a crime Democrats are more than eager to commit, for obvious reasons.

Yes, people are struggling. I’m not denying that. But an oft-hidden fact is that employers are struggling too … to find workers willing to work … and they are adjusting their rates accordingly. Indeed, the average hourly wage has risen from just under $14 per hour in 2000 to over $25 today. If employers could get workers for less, they would. Instead, the MARKET has forced them to gradually raise wages in order to compete with other employers for labor. Working against this, ironically, is Democrat-encouraged immigration, which serves to dampen wage prospects for lower-skilled employees forced to compete with counterparts used to making less than 50 cents on the hour.

If we’re suddenly jumping from $7.25 to $15, it’s hard not to ask why they wouldn’t just go all out and say $20? Hell, why not $30, or even $50? Everyone in America should have the ‘right’ to a six-figure income, right? No? The same problems anyone with an IQ above 60 could see with such a proposal apply just as much at $15. Of course, none of this has ever been about logic, just politics.