Scott Morefield
|
Posted: Feb 17, 2020 12:01 AM
Share   Tweet
The opinions expressed by columnists are their own and do not necessarily represent the views of Townhall.com. 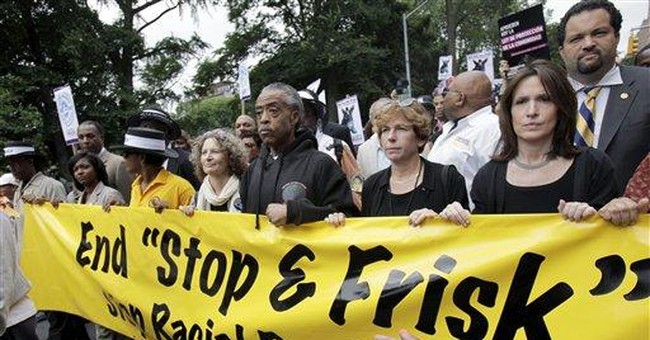 Only in the weird world of ‘woke’ would Michael Bloomberg come under such intense fire for arguably his most significant accomplishment while serving as the Republican mayor of New York City - managing to keep the densely populated city’s crime rate in check. Well, it’s not so much the accomplishment itself that’s causing quite the stir, but rather the, er, less than ‘woke’ tactics he used to get the job done.

Political correctness being what it is, of course, the billionaire businessman had to apologize and back off the whole stop-and-frisk business early in his campaign. It was a ‘mistake’ don’t you know, because he didn’t understand the impact blah blah blah (you know the drill) … And it seemed, for the most part, that he’d gotten a pass. That is, until Bloomberg’s rationale for the policy came to light again last week via some quotes from a speech he gave from 2015, not so long ago in actual time but light years ago in terms of how far down the rabbit hole we’ve descended.

“Ninety-five percent of murders, murderers and murder victims fit one M.O.,” Bloomberg said in a 2015 speech to the Aspen Institute. “You can just take a description, Xerox it, and pass it out to all the cops. They are male, minorities, 16 to 25. That’s true in New York, that’s true in virtually every city.”

“One of the unintended consequences is people say, ‘Oh my God, you are arresting kids for marijuana that are all minorities,’” he continued. “Yes, that’s true. Why? Because we put all the cops in minority neighborhoods. Why do we do it? Because that’s where all the crime is.”

Bloomberg was naturally slammed as a “racist” for daring to use ‘hate facts’ to reason through his policy, although nobody to this day has made clear exactly what other ‘facts’ would justify focusing on black neighborhoods to the extent that the NYPD did during that time. A real racist would do exactly the opposite, of course. A real racist would just let those neighborhoods burn themselves down, innocent victims be damned. But no, like him or not, Bloomberg at the time dared to believe that black lives do matter, and he went about doing what he thought was the best way to actually save innocent ones during his mayoral tenure.

Now, predictably, the now-Democratic presidential candidate is forced to pretend that reality doesn’t exist: “There is one aspect of approach that I deeply regret, the abuse of police practice called stop-and-frisk," Bloomberg said. "I defended it, looking back, for too long because I didn't understand then the unintended pain it was causing to young black and brown families and their kids. I should have acted sooner and faster to stop it. I didn't, and for that I apologize."

That’s right, folks. Being forced to apologize for saving black lives is exactly where we are, circa 2020. What Bloomberg failed to say in all his hostage-video-like apologies is that any of the statements he made to justify stop-and-frisk were not true. Granted, there are arguably Constitutional issues with the practice itself, but not necessarily for police focus on high crime areas. However, legality is only part of what’s been getting Bloomberg in trouble these days. The real hornets’ nest lies in where the majority of actual stopping and frisking is taking place. Seemingly, leftists who otherwise love the idea of a police state would have no problem if the policy were being enacted in middle and upper class neighborhoods, golf courses or retirement homes, even if the odds are slim to none that any fruit would come of police efforts in such places. No, the left is in a tizzy because those poor neighborhoods where the stopping and frisking was happening just happen to be majority African-American and Hispanic. And no matter how many innocent lives are saved, we can’t have that.

I’m no Bloomberg fan, not by a long shot, but perhaps the most disturbing aspect of this whole matter is the criticism coming at the former NYC mayor from President Donald Trump and some of his supporters. Trump posted, then deleted a tweet calling Bloomberg a “total racist,” then backed up that contention in an appearance with Geraldo Rivera. White House advisor Kellyanne Conway, pressed on this by Fox News anchor Chris Wallace, who showed her a video of Trump in 2016 specifically praising stop-and-frisk, smiled and contended Trump was “toying with everybody” because we all know what would happen had similar comments been made by the president.

Maybe so, but this isn’t a political point Trump World is going to win. In fact, by pressing it and trying to label Bloomberg as a “racist” for citing, back before the world lost what was already left of its damn mind, perfectly logical reasons behind the policy, the president and his team come off as disingenuous. Plus, they’re caving to the left’s definition of what is and isn’t ‘moral.’ We know Donald Trump supported the stop-and-frisk. We know he’d probably support it now. And we know the reasons why. Why pretend?

The next mayor, a radical left-wing Democrat, ended the policy and presumably the focus on high-crime neighborhoods, and predictably the crime rate has and will continue to spike. As atonement for his ‘sins,’ Bloomberg promised to “work to dismantle systems that are plagued by bias and discrimination” and “invest in the communities that borne the brunt of those systems for generations,” or something.

Will any black lives be saved? Of course not, because the left has always been more about controlling lives than actually working to save them.