Bill Maher Tries To Instill Sanity In The ‘Woke’ Left, But Will They Listen?

Scott Morefield
|
Posted: Sep 30, 2019 12:01 AM
Share   Tweet
The opinions expressed by columnists are their own and do not necessarily represent the views of Townhall.com. 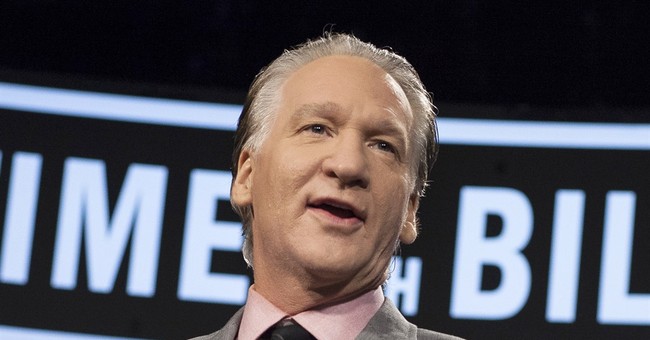 Comedian Bill Maher is a liberal who hates President Trump, but he’s also funny as hell. His long-running HBO weekly show, “Real Time with Bill Maher,” has become an absolute must-watch for growing numbers of politically minded thinkers of all persuasions looking for a much-needed Friday night laugh.

Case in point: Is there another right, left, or politically neutral comedian in this country who would dare tackle a subject as sensitive as, say, white self guilt, and still manage to be funny AND land on the side of sanity? No joke - that’s exactly what Maher did Friday night when he mocked the “tedious virtue signaling” from “self-loathing” anti-white liberals.

“White liberals are the only group that has a bias against themselves,” he said. “They want to hang out only with people who are not them. That’s like your mother preferring the neighbor’s kids. There’s a weird self-loathing going on among white liberals, and it’s not helping anyone. Lifting up those who society has cheated or forsaken, that’s liberalism. Hating all things white is just tedious virtue signaling.”

The HBO host lampooned the ridiculous white Twitter shame of people like actress Rosanna Arquette, whose August tweet - “I’m sorry I was born white and privileged. It disgusts me. And I feel so much shame” - was summarily deleted after the mockery, including my own, apparently became too much.

Then, Maher went for the double-kill shot, dismantling both the concept of slavery reparations and white liberal self-loathing in one fell swoop: “How many white liberals would pay actual reparations? Real money, taken out of your paycheck every week. If you really feel this bad about the whole race thing – if being white is really this toxic for society, let’s tax it. Let’s tax whiteness. A honkey tax.”

Now I don’t care who you are, that’s funny stuff. You’d think being a liberal in the era of peak-PC would make a comedian like Bill Maher tedious, boring and humorless, given that the worst kind of humor - incidentally the only kind allowed these days - is the ‘safe,’ woke, politically correct, lecturey, kind. The kind that might work to avoid getting deplatformed, non-personed, or blasted by the Twitter ‘morality police,’ but which sadly isn’t all that great at keeping audiences awake or even mildly interested.

Maher, however, is a notable exception because, far from seeing liberals alone as the epitome of morality and virtue and everyone else as irredeemably evil, his acerbic, politically incorrect brand of political humor is as prone to poking fun at the loonies on his side as at Trump and conservatives. And while most guests include liberals and ‘conservative’ anti-Trump types, Maher notably has shared his platform with the likes of Ann Coulter, Tomi Lahren, Kellyanne Conway, Rick Santorum and others brave enough to appear and debate with the host and other liberals in front of a hostile crowd. “I love people who stick by their guns, even when the crowd does not agree,” Maher said while discussing the show’s history of inviting conservatives as guests.

As far as left-leaning politically-incorrect humorists who can laugh at themselves and particularly their own ideologies go, Maher certainly ranks number one, which would actually be an accomplishment if he wasn’t, sadly, the ONLY one. His show is what Saturday Night Live should be, and once was before it became another #Resistance media cog.

From mocking political correctness to pointing out the fact that if Donald Trump Jr. had Hunter Biden’s Ukraine connections, Rachel Maddow would be all over it, Maher isn’t afraid to punch left, but always with an eye towards saving it. Though pushing the envelope has always been Maher’s style, he’s not doing it to curry favor with the right. Rather, in his own way, Maher is actually trying to restore some semblance of sanity to what he clearly sees as his own side’s crazies taking over. He wants to win, and he knows his party’s chances with normal Americans decline sharply when seemingly every Democratic candidate must prostrate themselves before the absurd, ever-increasing demands of ‘wokeness.’ In fact, if there was a snowball's chance in hell that 'woke' leftists would listen to Maher and only act slightly less crazy, conservatives would have a lot more to worry about in 2020. (Don’t worry, Trump fans. That ain’t happening.)

“Real Time” doesn’t pretend to be unbiased, but it’s an honest, sincere look at American politics from a liberal worldview. But the fact that the liberal worldview is increasingly becoming disconnected from the “woke” worldview is enough to keep plenty of conservatives interested, and watching.