Scott Morefield
|
Posted: Aug 26, 2018 12:01 AM
Share   Tweet
The opinions expressed by columnists are their own and do not necessarily represent the views of Townhall.com. 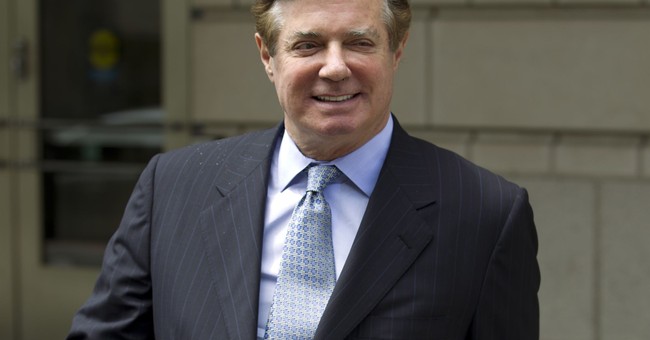 Sadly, whether or not you have any sympathy for businessman and former Trump campaign chairman Paul Manafort, convicted earlier this week on 8 of the original 18 counts of bank and tax fraud, likely depends on whether or not you support President Trump.

It shouldn’t be that way, of course. When criminals are convicted and put away, the vast majority of society should breath a sigh of relief, collectively say “good riddance to bad rubbish,” and hope the public is protected from them for as long as legally possible.

Except, this isn’t quite the case with Manafort, is it?

Even at least one juror, who actually voted guilty and would have convicted Manafort on all counts, felt sympathy. Paula Duncan, a self-described Trump supporter, reluctantly believes prosecutors proved their case under the law against Manafort even as she acknowledged that the former Trump campaign chair likely would never have been prosecuted were it not for his association with then-candidate Trump.

“Certainly Mr. Manafort got caught breaking the law, but he wouldn’t have gotten caught if they weren’t after President Trump,” Duncan told Fox News before describing the entire Mueller probe as a “witch hunt to try to find Russian collusion.”

And there’s the rub that’s getting in the craw of so many Trump supporters. It’s not that people should be allowed to skirt our tax laws, as Manafort apparently did, but should people be selectively chosen to have their financial lives combed through on the basis of which politician or party they associate with? Especially when few, especially those whose portfolios are more complicated than a mortgage and a couple of car payments, would survive such an audit entirely unscathed?

Conservative commentator Dan Bongino, who as a former secret service agent knows of what he speaks on this topic, said as much to Richard Goodstein after the former Clinton advisor tried to paint Trump as Nixon because a couple of his former associates are now convicted felons.

“Richard, give me 10 minutes in your personnel files in your jobs and subpoena power, in my time as a federal agent, and I promise I will make a criminal out of you,” Bongino said this week on The Ingraham Angle. “I can promise you that. Everybody in the United States has probably broken federal law at some point, whether they know it or not.”

Since everyone is a lawbreaker, it then comes down to who to make an example of. And who better for overzealous lefty prosecutors to make examples of than former or current Trump associates, especially if the threat of decades in prison for paperwork “crimes” will encourage them to sing?

“In a Constitutional Republic we investigate crimes, in search of the people who did it,” Bongino tweeted earlier this year, refuting Stalin’s old sidekick Beria who once said, “Show me the man and I’ll find you the crime.”

“We DO NOT investigate people, in search of crimes,” Bongino continued as he tied the unconstitutional practice to the real motives behind the present-day purge of former Trump associates. “Liberal police-state tyrants understand the difference, but they don’t care. They want Trump’s scalp no matter what. Sick.”

“In fact, our entire criminal code has become a leviathan unto itself,” Vespa continued. “In 2003, there were only 4,000 offenses that carried criminal penalties. By 2013, that number had grown by 21 percent to 4,850. The code has become so big, that the Congressional Research Service and the American Bar Association simply do not have enough staff to adequately categorize every law we have on the books.”

Not to mention the real sentencing disparities created. Tragically, we seem to have a system of “justice” which, in many cases, punishes “paperwork criminals” more harshly than rapists and murderers.

Kentucky Senator Rand Paul has been one of the few lawmaker voices in the wilderness on this issue. Speaking with Fox News anchor Neil Cavuto on Monday, Paul expressed “sympathy” for Manafort because the man could literally spend the rest of his life in prison for “paperwork crimes.” Really, will the mean streets of Bridgehampton and Brooklyn’s Carroll Gardens be any safer with Paul Manafort securely behind bars?

“I think we have gone crazy on criminalizing everything under the sun,” said Paul. “He will never have physically hurt somebody, and yet, if you add up all of these things in which you are guilty, it would get six life terms.”

“I think we have gone too far,” Paul continued. “We need to reassess what we do. Also, the power of the prosecutor to hold life sentences over people for non-violent paperwork crimes, and then say ‘give us somebody else,’ it’s a great incentive for people to give up somebody who might not be guilty, because they are afraid of spending their life in prison.”

Liberals don’t seem to agree, at least when it comes to conservative defendants. In an article entitled, “Rand Paul Calls For Criminal Justice Reform Because The System is Too Hard on… Paul Manafort,” Mediaite’s Ken Meyer opines, “Senator Rand Paul (R-KY) believes Paul Manafort‘s legal troubles are so horribly unfair that there’s no choice but to remake the American justice system.”

There was a time, not so long ago, when liberals were against herding people, regardless of skin color, into prison for “paperwork crimes.” (And before you cry ‘hypocrisy,’ I’m against the “drug war” too.)

Paula Duncan, the juror who spoke out, said, “Something that went through my mind is, this should have been a tax audit.”

Indeed. But Manafort backed the wrong horse in 2016, and now he must pay the price.

The class warfare stoked for decades by Leftists hellbent on someday sparking Bolshevism 2.0 will keep many for feeling anything at all for Paul Manafort. It’s easy to point and laugh when the “mighty” are brought down. We don’t have private jets and multiple mansions spread across New England, so why should he? Enjoy your cell and don’t drop the soap, pretty boy.

In a real prison, where Manafort is headed, they say it’s impossible to keep all the rules to the letter. That’s purportedly so guards can have ultimate control and the ability to choose who to punish.

Sadly, not entirely unlike the “free world ...”