Why the Loss of 'Non-Interventionist' Trump Could Cost Republicans Everything

Scott Morefield
|
Posted: Apr 16, 2018 12:01 AM
Share   Tweet
The opinions expressed by columnists are their own and do not necessarily represent the views of Townhall.com. 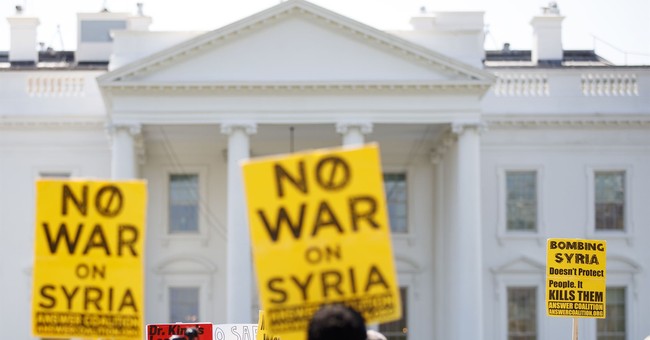 On one hand, non-interventionist types see candidate Trump’s promise to end America’s involvement in wars that serve little national interest as one of the key pillars of ‘Trumpism,’ and indeed a primary reason for his 2016 electoral victory - an issue that, along with trade, helped cobble together a constituency and enable an electoral map shift that wouldn’t have been possible with any other Republican candidate.

On the other hand, conservative “hawks,” assuming they mean well and aren’t globalist “Deep State” hacks itching for war to serve their own nefarious purposes, see America as the world’s only remaining superpower capable of righting the world’s wrongs, or at least the ones that make it to Trump’s television screen.

I’d put Gorka and a few more in this category. The others? Well, they’re most likely “Deep State” hacks itching for war to serve their own nefarious purposes, but that’s just one man’s opinion.

“If we do nothing, then America as a nation starts to lose its meaning for what it represents,” said Gorka, invoking the image of a shining city on a hill launching Tomahawk missiles at the evildoers, because that’s what the founders intended.

No really, that’s what he said… sort of.

“I know you believe in what that nation represents,” said Gorka to Ingraham. “You’re a believer. You believe in the eternal values that our founding fathers instilled in our founding documents. If those documents mean anything today, we take this action.”

Ingraham, however, had a whole other history lesson involving America’s founders that the Hungary-born Gorka might have missed. “I could quote an Alexander Hamilton and a George Washington to you tonight where they’re warning us to not get entangled in foreign affairs,” said the Fox News host.

Ingraham is far from alone on this, as many other longtime Trump supporters weighed in against Friday’s missile attack on Assad’s Syria.

Ann Coulter asked, “Didn't we just drop bombs on a country 7k miles away and of zero strategic interest?”

British former UKIP leader and Brexit architect Nigel Farage noted, “I’ve said it before and I’ll say it again. Our track record of intervening in Syria and the Middle East is terrible.”

And indeed it is. From the lives lost to the billions of dollars wasted, it’s hard to make a coherent case that ANYTHING we’ve done in the Middle East has truly been worth the cost. But sadly, it’s the longtime Trump supporters, the ones who have had his back through thick and thin, who seem to understand this the best.

But guess who doesn’t understand? Guess who all of a sudden has ‘newfound respect’ for Trump where they hated him before? Democrats, Establishment Republicans, globalists, and “Deep State” operatives, all of whom are giddy at the prospect of yet another pointless Middle Eastern war at the expense of the ordinary Americans Trump typically champions.

And this time, in what has to be the lamest excuse for a military strike yet, we’re supposed to believe that Syrian dictator Bashar al-Assad woke up and decided to gas 40 of his own people because, unlike Trump, he was tired of winning. Now I’m no Middle East expert nor do I pretend to play one on Townhall, but color me more than a little dubious.

Fox News primetime host Tucker Carlson has yet to host a show since the strikes, but his skepticism was apparent in the days before. "How would [gassing civilians] benefit Assad?" asked Carlson, in the question of the year so far.

To his credit, President Trump hasn’t given up on his non-interventionist tendencies entirely. As bad a decision as it was, at least this strike was targeted and seemingly not aimed at “regime-change” or any other tension-escalating goals. It’s little solace, but it’s certainly different from Republicans past.

But going forward, where the rubber actually meets the road, Laura Ingraham nailed it when she told Gorka, “We’re out of money. We have no dough. It’s not 1995 anymore Sebastian.”

“So, we let children get gassed?” Gorka asked.

Not only financially, but politically as well. For it was his endless war in Iraq that in no small part cost George W. Bush his House and Senate majorities in 2006 and led to the “blue wave” of 2008.

If you don’t think the ‘Deep State’ wants the same thing for President Trump and the GOP, you’ve been living under a rock.