Fail Me Once, Shame on You 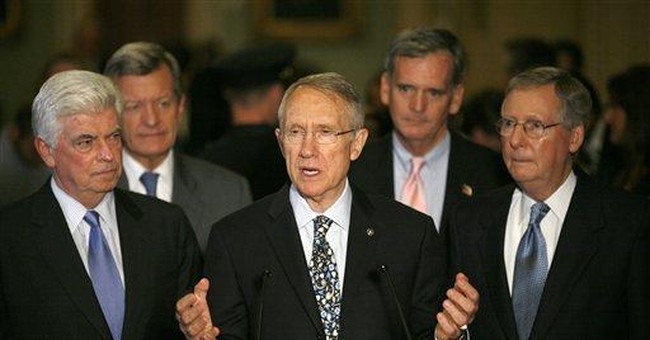 In a few short weeks, Americans will go to the polls to cast their ballot. During this period politicians will be making their final push to convince an engaged electorate why they are the best choice. Unfortunately for Democrats, increased scrutiny does not bode well for their electoral chances. Simply put, America stands at the precipice of an economic abyss and the failed policies of liberalism are not the answer.

Policies such as taxing hard working Americans will not stimulate the economy. Such tactics further harm our economy, making growth much more difficult. Yet, the next generation of left-wingers that national Democrats are trying to elect, including Jeanne Shaheen of New Hampshire, Kay Hagan of North Carolina and Jeff Merkley of Oregon have a history of opposing pro-growth policies at the state level. While on the federal level, Boulder Liberal Mark Udall (D-CO) has aggressively advocated for economy choking taxes to fund bigger government.

Jeanne Shaheen’s economic record would make even the most unabashed tax and spend liberal blush. During her campaigns for Governor, Shaheen repeatedly pledged her opposition to any broad-based tax. Yet in 1999, Shaheen overturned centuries of New Hampshire tradition and implemented the first-ever broad based tax in the Granite State. While implementing new taxes, Shaheen also doubled the state budget to $2 billion. Additionally, Shaheen has yet to answer questions regarding her relationship with failed national bank Providian, which pushed through legislation to relax consumer protection for credit card holders – including allowing banks to switch customers from a fixed rate to a variable rate. Actions supported and signed into law by then Governor Shaheen. No wonder the Union Leader said she, “sold out consumers in exchange for money and a cozy relationship with a major national bank,” further underscoring the fact that Jeanne Shaheen is ill-equipped to shepherd our economy.

Kay Hagan shares Shaheen’s affinity for taxing hard-working Americans, but her failures also include running up debt on the backs of North Carolina’s taxpayers. Hagan’s crusade to raise taxes includes multiple votes for a higher sales tax, costing North Carolina residents billions, yes billions, of dollars over a six-year period. Hagan also voted multiple times against a decrease of the personal income tax rate. It’s no surprise Hagan needed to keep taxes high, because during her stint as the state Budget Committee Chairwoman, state spending increased by 64% or $8.1 billion. But even those higher taxes could not offset Hagan’s reckless economic plans, as her irresponsible spending drove the state’s debt up to $7 billion. Hagan failed at the state level, but wants taxpayers to overlook this and elect her to the Senate subjecting our fragile national economy to her reckless economic policies.

Jeff Merkley’s record on taxes would be laughable, if it weren’t so tragic. Merkley stated “I advocate for tax hikes every night in living rooms across Oregon” during a recent debate. Additionally, he tried to stop the Oregon government from giving people back their own money.  Merkley sponsored legislation to override a constitutional mandate that the government return excess money to the taxpayers. Merkley’s legislation would have diverted the money from taxpayers and back to the government. So after a lifetime of raising taxes and opposing tax cuts, Merkley worked to ensure that even excess funds remained with the government, not the taxpayer.

On the federal level, Boulder Liberal Mark Udall has opposed tax relief for middle class families, including doubling the per-child tax credit and relief from the marriage penalty. The tax cuts Udall voted against have lowered taxes for more than 1.7 million Coloradans, saving families with children an average of $2,864. Not only that, Udall strongly opposed assisting small business owners, voting 11 times against repealing the Death Tax. But like Hagan, it is obvious why Udall needs to consistently vote for higher tax burdens. Udall voted for a record $2.9 trillion spending plan. Worse, he was the only member of Colorado's delegation to vote for a plan that would add $68.6 billion in additional spending. Udall’s record on taxes is so bad he lied about it in an ad, was exposed by a local television station, and still used the same lie again in his next ad. Not the economic acumen or ethical standards Coloradans deserve.

The crisis facing this economy cannot be overstated. There is not a quick fix to solve the various problems causing the crisis. But solutions will not come from increased tax burden, debt and government spending, which are the hallmarks of Jeanne Shaheen, Kay Hagan, Jeff Merkley and Mark Udall’s political careers. These candidates have repeatedly failed their constituents when it came to economic policy and it is important this election we work to ensure that we only reference their failures in the past, not present, tense.

The next several years of this economy will be critical and we need fiscally conservative, common-sense elected officials at the helm. That is why this November the choice is clear, the choice is Republican.