Palin: Why She Left is No Mystery 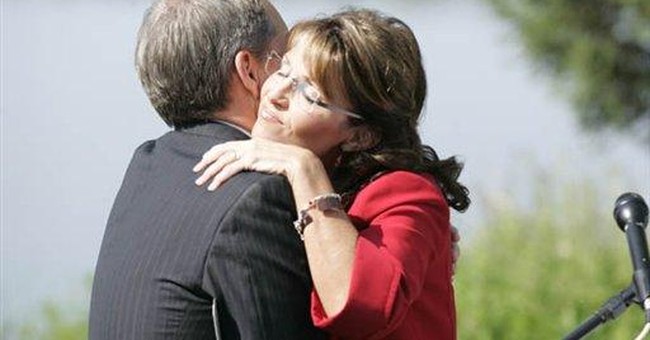 The reason Sarah Palin resigned her post as Governor of Alaska is really no mystery. And yet we must make it one. A person can never be taken at her word. What did she mean by a “higher calling?” She’s looking for a way to make money. It must be a huge book deal. But wait, she already has a book deal.

She must be getting a talk show on FOX … but FOX has said there is nothing in the works. Then NBC? Maybe taking Katie Couric’s place on CBS? Now that’s a great idea. Or maybe there’s a grand … secret … strategy to take the White House in 2012. It’s a brilliant strategy. It’s a ridiculous strategy. It’s risky … it’s smart. There has to be more to this. What’s the angle? How can we read further between the lines? What’s in this for her?

She is a coward … a quitter. She’s crazy like a fox. She is laying the groundwork for a new political movement. If she can’t take the heat, she should get out of the kitchen—and on it goes, from both sides, ad nauseam.

But maybe there is a logical explanation after all with no mystery involved. Governor Sarah Palin said the following: She is a no-frills governor who wants to get the job done. All the investigations launched, which by the way, have been proven false and have cost the Alaskan taxpayers over two million dollars to respond to the flood of accusations and FOIA requests. Today, most of her time and her staff’s time is spent responding to the constant barrage of criticism and attacks—and the work for the people of Alaska is being neglected.

Based on that alone, she is “passing the ball,” as the good basketball guard she once was, so that the “team,” the conservative movement can win. She wants to keep her focus on what really matters, help the people of Alaska continue on a path of good government, and stop facilitating the time and life-takers of the left.

She said it was difficult. She said it was painful. That doesn’t sound like someone who wants to “quit.” She said her recent visit to the troops was the clincher, referencing their sacrifice and reiterating the theme of remembering what really matters. She was alluding to her own need to step down when she personally didn’t want to, I believe, feeling it was her duty as a statesman and as a duly elected servant of the people of Alaska.

But the higher calling? I don’t think it’s a book deal or a talk show or a new political movement. I believe it’s the heart of a mother who can’t bear to see her children brutalized by a cannibalizing, angry opposition.

What person in public life has ever had her children and family so maligned and attacked so brutally, explicitly and disrespectfully?

Was it Jimmy Carter with his strange little Amy? Or Lyndon B. Johnson with his Bird girls? Or Nixon or Ford or Reagan? Ron Reagan Jr. contributed to his own ridiculousness by appearing in his tighty whities in a parody of Tom Cruise. Jenna and Barbara Bush got a little burnt by reports of underage drinking, but that was quickly stifled. Cindy McCain was trashed for her pain-killer addiction and Teresa Carey for her weird campaign remarks. Barack Obama issued a stern warning to anyone who would ridicule Michelle for her declared shame over the country, but (rightly) not a word was said about his precious girls. Wives and husbands active on the campaign trail are fair game, but not children. That’s the way it has always been and that’s the way it should remain.

Too bad the door was opened wide for debasement, and ridicule, and gutter humor for not just one of Sarah Palin’s children, but for at least three of them. Within days of her selection, Trig was not her baby, but her teenage daughter’s. Then the gleeful news, that Bristol was, in fact, pregnant and unmarried. Throw in a tasteless remark on SNL about Todd committing incest with his girls—things that should not be spoken, much less joked, about have become the norm for the vermin class who hate anyone who loves and tries to represent healthy, whole families.

When the search for sexual indiscretions, pictures, photos, came up short on Palin, she was mocked for her beauty, her voice, her sense of humor and alleged lack of knowledge of public policy. Her interviews were edited, the interviewers powered up to make her look foolish, her McCain “handlers” became her worst enemies … the people she trusted stabbed her in the back.

And then the mockery of Trig, baby Trig … Down syndrome Trig. Altering his photo … blogging inexpressibly profane remarks about his birth and leaving them on the Web site for over week, despite complaints. Perhaps this was the last straw.

“I think much of it [her family’s counsel to step down] had to do with the kids seeing their baby brother mocked by some pretty mean-spirited adults recently,” Palin explained in her resignation speech. “By the way, sure wish folks could ever, ever understand that we all learn so much from someone like Trig—I know he needs me, but I need him even more … what a child can offer to set priorities right—that time is precious … the world needs more ‘Trigs,’ not fewer, ” she said.

It’s no mystery why Sarah Palin stepped down now to stop the waste of time and money for the Alaskan people and to quench the infliction of pain on her family. If the love of the governor for her state and the mother for her children causes her to step down and become a “quitter,” then may her kind of “quitting” increase.