The Confusion of the Pagans 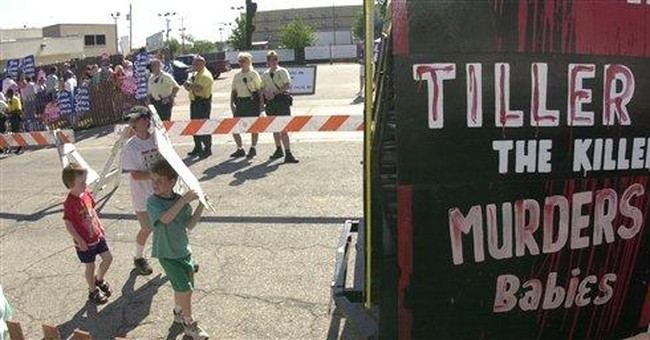 It would take a missile’s laser focus to cut through the confusion and conflict concerning the murder of late-term abortionist, Dr. George Tiller.

Shot down in his church while ushering on a Sunday, the crime was shocking. The pro-abortion lobby is rightly grieving the loss of a colleague while strangely expressing no remorse for his thousands of little victims. The pro-life community is struggling to find the balance between relief that his death is saving lives and revulsion at the means by which they have been saved.

Dr. LeRoy Carhart, Nebraska abortion doctor who regularly aided Tiller in Kansas with late-term abortions, manifested his confusion at a memorial service for Dr. Tiller at the National Cathedral in Washington: “I think there is absolutely no difference in putting a cross in front of a person’s home because of what race they belong to than there is putting a cross in front of our homes because we do abortions.” Note to Dr. Carhart: The Ku Klux Klan and the pro-life movement use the cross for polar opposite purposes; the former to threaten death to the living … the latter to honor the innocent dead.

“This is the equivalent of Martin Luther King being assassinated,” he added. Dr. Martin Luther King, the civil rights leader who abhorred violence, compared to a late term abortionist who perfects violence as a trade?

Dr. Carhart got emotional as he remembered his late-term partner, Dr. Tiller. One cannot blame him for the natural grief he must be experiencing, but we can take great issue with his use of the moment to perpetrate his twisted perspective.

“What I want to assure the press and reassure the women of America is that we will somehow, somewhere continue to provide abortions later in gestation.” Who exactly is assured by that statement? Who is comforted … happy … relieved? And what kind of man would spend his days dismembering live, kicking babies and delivering them part by part? What kind of man would assure women he will continue to perform the heinous act of stabbing a baby in the back of the head with scissors, suctioning its brains, crushing its skull as the lower body, already delivered, thrashes in pain, removing the head last so as to fool himself and the law into thinking it is not infanticide? What man is proud of that? What man lives and breathes that mission and what woman or member of the press applauds his assurance not to worry? It can happen to their baby or grandbaby in the future too?

What kind? Only a confused, deluded, perverse people whose worldview is more pagan than Christian could embrace this evil.

At a press conference before the memorial, Dr. Carhart said the choice to have a child is “a religious freedom issue” and that a woman should be able to decide the life or death of her baby based on her beliefs. So life and death is to be decided by each of our individual beliefs? What about Princeton bioethics professor, Peter Singer’s belief that a mother should be able to terminate the life of a disabled baby long after birth?

What about a mother who practices Satanism and believes in child sacrifice? Is our right to life guaranteed only by our mother’s individual belief system? Clearly-stated American principles alone would reject this view. The first inalienable right conferred upon us by our Creator—according to the Founding Fathers—was life … life… life.

“God gave that fetus a ‘guardian ad litem’ when he chose the mother that fetus is born with. That mother, I feel, has been charged by God to make the right choices for that child during its unborn and early born years,” continued Dr. Carhart. A guardian ad litem is a legal term for someone who watches over a child or incapacitated adult, seeking their best interests, making decisions to benefit their charge until he or she comes of age. How could you trust your life to a guardian who would have you killed to convenience themselves? The idea is preposterous. And by the way, what god is he referring to?

While Dr. Tiller was an usher in the Lutheran church, Dr. Carhart expressed a one-time desire to be a Methodist minister. The press conference was sponsored by the “Religious Coalition for Reproductive Choice.” Why do the people who perpetrate this monstrous practice refer to the Christian God in their own defense—and insist on maintaining some sort of identity with Him? The Judeo Christian God is not the god of confusion, and he is not unclear on this issue of the murder of the innocent.

Does it give them cover? Salve their conscience? Give them opportunity to seduce more desperate women into their damnable thinking? Yes, I think to all. Let them be pagans and practice what pagans do. Let them refer to the gods and worship nature and pleasure and preach child sacrifice in their gathering places, but let them cease and desist all claims to the Judeo-Christian God.

We should not succumb to the confusion of the pagans.