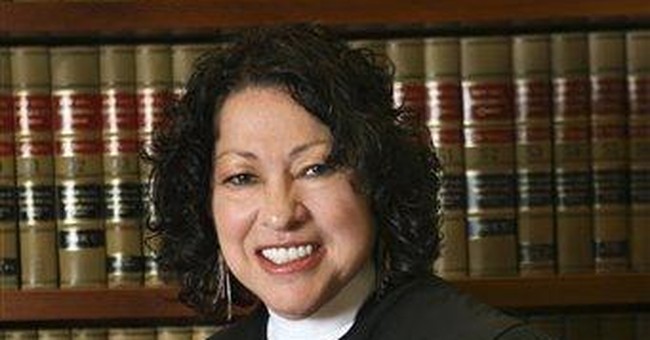 Justice Sonia Sotomayor’s commitment to her own personal interpretation of the Constitution could have devastating consequences on everyday Americans, and here’s why:

It was Good Friday when the knock came on the door at the home of Pastor David Jones and his wife, Mary. San Diego County officials were hot on the trail of reportedly suspicious activities taking place inside the couple’s home each and every week.

Mrs. Jones, the co-conspirator, was interrogated vigorously. “Do you sing? Do you say ‘Praise the Lord?’ Do you say ‘amen?’” San Diegans can be relieved their county officials are in hot pursuit of major trouble makers. Especially on Good Friday. How could authorities possibly sit by and allow homes to be the centers of meal sharing and Bible Study in the midst of unsuspecting, at-risk neighbors?

The Joneses were warned that if they did not pay for an expensive Major Use Permit, normally used for the city to conduct studies on environmental impact, traffic patterns, etc., their weekly gatherings of 15 would have to stop. And if they did not stop, there would be escalating fines and “then it will get ugly.” Seems like it already has.

Meanwhile, down in Louisiana, a man was reportedly stopped by police and held for questioning and a background check for displaying the notoriously offensive “Don’t Tread on Me” bumper sticker. Christopher Gadsen, a Revolutionary War era general designed “Don’t Tread on Me” for a flag representing the need to defend America’s rights from tyranny. Ben Franklin loved the symbolism Gadsen used of the rattlesnake and the rebellion. Good thing Franklin wasn’t traveling in Louisiana, bearing that flag on his carriage, when those police were out to catch “right wing extremists.” Imagine … Homeland Security urging the nation’s law enforcement to protect the homeland from those who want to protect the homeland. Is there a category for that?

Or for that matter, for this: Debbie McLucas is a hospital supervisor at Kindred Hospital in Mansfield, Texas. Her husband and sons have all served in the military. Her daughter is currently stationed in Iraq as a combat medic. In honor of Memorial Day, Debbie did the unthinkable: She hung a three-by-five foot American flag in an office she shares with three other supervisors. One was quite offended. So offended, she took down the flag all by herself. Take that, Debbie McLucas. The hospital refused to support the display, claiming other patients and visitors were also offended.

It would be hard to fault the offended supervisor. She has only been in the country for 14 years, during which time she has risen to a high level of achievement, made a good salary and, as with a number among the new wave of immigrants, never had or felt a need to show loyalty to the country for her great fortune. It isn’t her country … this USA … some nation in Africa is … and the honoring of the shedding of American blood abroad to protect it was apparently of little consequence to her.

These three stories currently in the news represent the types of issues that may very well end up in the United States Supreme Court.

Enter Judge Sonia Sotomayor and the living, breathing, constitution philosophy she and Justice Ruth Bader Ginsburg and President Barack Obama embrace. Under the original interpretation of our rights, pastor and Mrs. Jones would have had the right to hold a Bible Study in their home, but the newly-found interpretation of the “right to privacy” which more enlightened judicial minds most recently found to protect abortion and homosexual relations may in the future not protect Bible Study, which by the way, is the source of objection for both.

While the ever-evolving interpretation of the First Amendment right to free religious expression currently extends to Muslims with prayer rugs in public school and prisons, future justices with an agenda may no longer see it extending to Christians in their homes.

Homeland Security’s new concern over “right-wing extremists,” including those who are pro-life, those who believe in a strict interpretation of the Bible, others who oppose illegal immigration and, horror of horrors, embrace state control rather than federal, has given us yet another interpretation of the First Amendment. The right to free speech, primarily guaranteed for the purpose of political dissent may soon not include political dissenters who display politically incorrect concerns with unpopular slogans on bumper stickers.

The Constitution is said to protect the burning of the American flag, but its guarantees haven’t devolved yet so that the display of it is criminal. Don’t think that couldn’t change. Our current president thought it inappropriate to wear the flag on his lapel while campaigning. While other American leaders have proudly worn it in the past, he called it a “false patriotism.” And his friends on the left agree. Newfound rights not to be “offended” together with immigration laws that have made it too tempting for some immigrants to reap the benefits of this country while disdaining and undermining it have made the flag unacceptable in many quarters. While their rights to claim offense may be protected by the new understanding of the law, our right to display the flag could well be threatened.

What’s at stake with the nomination of a judge like Sonja Sottomayor are real-life consequences for ordinary American citizens. What we don’t need is a justice taking the bench with the notion that somehow the Constitution doesn’t mean what it has always meant, who proceeds to twist it to reflect his or her own viewpoint—a justice like Sonia Sotomayor, the older, wiser Latina female, who in her own words “would more often than not reach a better conclusion than a white male…” judge.

The dangers of her attitude are exactly why the Constitution isn’t “living.” Its principles were established to endure for generations so that such men and women, persuaded by their times, could not recklessly adjudicate while claiming “new wisdom.” Methods change, circumstances change, but principles and carefully-crafted law based on those principles stand like a rock for all time.

A wise Latina woman and a wise white man will more often than not reach the same conclusion: One reflective of enduring wisdom and not the folly of our times.