Dollar General Is a Part of Americana Worth Saving and Celebrating

Salena Zito
|
Posted: Jan 14, 2020 12:01 AM
Share   Tweet
The opinions expressed by columnists are their own and do not necessarily represent the views of Townhall.com. 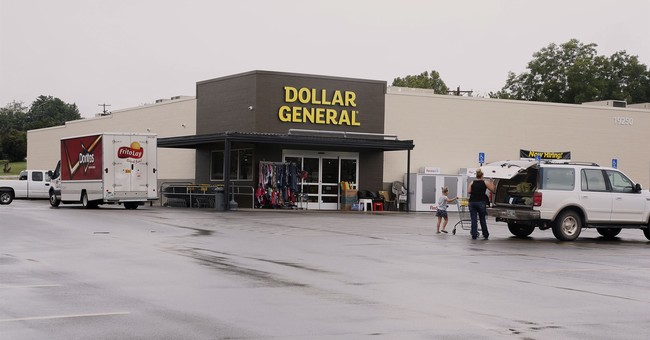 TARRS, Pennsylvania -- Five years ago, the plot of land where the Dollar General store sits on Glades Pike was just that: a plot of pastoral greenery located near a row of neatly kept homes in an unincorporated village that once briefly boomed as a coal town.

The store's familiar yellow sign with bold, all-capitalized black letters sits slightly back from rolling Pennsylvania Route 31, which runs parallel to both the turnpike and the Lincoln Highway. For many people in the area, the store serves as a quick stop for a forgotten grocery staple or deeply discounted household goods.

These places match the service provided by the mom and pop general stores that once dotted rural America for two centuries, or the five-and-dime stores that populated small- and medium-sized towns across the country post-Civil War. They serve a purpose unmet by larger supermarkets unwilling to locate to lower-population regions because the regions make no business sense.

The Dollar General parking lot often goes from full to empty to full again, reflecting the swift shopping habits of its customers.

Linda Webster has been the general manager of this Westmoreland County store for just a month, but this isn't her first discount-retail store rodeo. "I've been with the company for five years; I actually had the Acme store when it opened two years ago," she said. "Then I was in Norvelt for three years at that store."

Webster works for a company that no one will argue doesn't serve a community that needs it. The closest big-box supermarket or chain store is 20 miles away, making the Dollar General much more convenient -- particularly in the winter, when frequent snow squalls bury the region and make getting to the big-box store tough. Year 'round, Dollar General is affordable to both millennials and baby boomers looking for bargains on just about anything.

Webster's company is also disdained for its alleged inability to provide nutritious options -- so much so that activists have convinced local councils to pass laws banning new stores from opening there.

Cities in Alabama, Texas and Oklahoma have done the same. Apparently, they aren't nutritiously woke enough for those city leaders either, who see them as deterrents to the opening of full-service grocery stores.

This essentially turns local governments into food police who believe their citizenry cannot make healthy decisions on its own.

Dollar General Corp. spokeswoman Crystal Ghassemi says the company is disappointed in the local politicians' choices. "We understand and support the desire to improve the health of the communities we serve," she said in an interview with the Washington Examiner. "However, we do not agree that the dollar store industry, or Dollar General in particular, is the problem, and we do not believe that moratoria and/or restrictive zoning ordinances are the solutions. In fact, we believe those most adversely affected by these measures are customers who are forced to travel farther and/or spend more on everyday needs."

Linda Webster loves her job and being connected with the local community every day. "We have a lot of people that need access to their basic items: milk, eggs, bread, toiletries, necessities, stuff like that, but we also have cash-conscious customers that buy a lot of other stuff because they save money," she said.

Dollar General started in Scottsville, Kentucky, in 1955 as a general store. The only difference between it and its late-19th-century predecessors Woolworths and G.C. Murphy Co. was that it wasn't a five-and-dime; instead, the promise was that nothing would exceed a dollar.

Stores such as Woolworths were a staple across the American countryside and, similar to the Dollar General model, served low-priced trinkets and canned goods for more than 100 years to underserved or cash-strapped communities that appreciated and needed the bargains.

No one at Dollar General will argue that its stores have the same nostalgic charm Woolworths held within its wood-planked floors or charming lunch counters. But the premise is the same, with one exception: Back then, it was hard to find examples of any town councils that wanted to restrict their citizens from shopping at Woolworths within their city limits.

"Maybe the elites should try stopping in one and listen or talk to people who use them with frequency, and maybe, just maybe, they'd understand why people need to use them," said Kim Ward, state senator for Westmoreland County and frequent shopper at the Norvelt Dollar General. "I mean, who doesn't love a bargain?"