Salena Zito
|
Posted: Sep 24, 2019 12:01 AM
Share   Tweet
The opinions expressed by columnists are their own and do not necessarily represent the views of Townhall.com. 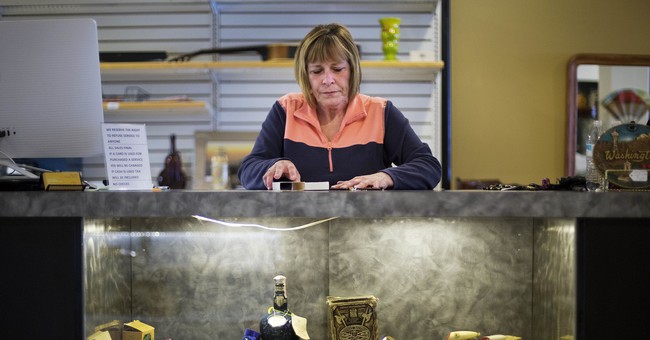 OAKDALE, Pennsylvania -- Some towns die hard. This one nearly did.

The horrifying news ran across the front page of every newspaper in the country, with reports of carnage and photos of a demolished landscape in which buildings and trees were leveled.

That's the most notable thing to ever happen in Oakdale, which since its inception has been fondly called "America's hometown." Way back when, it was a quaint agriculture community, the farmers of which were skeptical when the powerful Pennsylvania Railroad's main line to St. Louis and Chicago cut through their pastures in the years before the Civil War.

Thus, Oakdale became part of the connection of the East to the Midwest, which is why Aetna located its plant there. The railroad is also why Kinsey Electric located there 15 years after the blast. But after the railroad left in the late '70s, bringing with it the commerce, connection, shoppers and laborers, America's hometown again faced an uncertain future.

Some ruins of the Aetna plant are still visible if you work your way through the weeds. The old Kinsey Electric warehouse stands on the same road. That building somehow cast a spell on a local woman named Whitney Jurgovan.

"I live three minutes from the building, and I drove by it all of the time," she said. "I love old industrial buildings," she gushed, praising "their windows and their rusty amazingness."

"There was a gentleman in there. His name was Claude. He rented a room inside the building for a custom pet food company. He was obviously taken back by why I was there and what I wanted. I said, 'I want to do this thing here.'" This "thing" she wanted to do was to house a market there a couple of times a year, filling it with artisans, antique dealers, food trucks and coffee stands, with a wine and cheese party on the first night and a local band.

Everyone -- except for her pragmatic engineer husband, Tony -- thought she was a wee bit crazy. "Nobody understood until we had the first market what I was actually trying to do," said the former stay-at-home mom, who sold antiques on the side, mostly as a hobby.

In honor of the former inhabitant of the old warehouse, she named her enterprise the Kinsey Market and set to work cleaning up the old insulators, gears and grease stains from all the engines, motors and transformers that were once made there.

She initially rented the building from a very skeptical absentee owner, got some vendors, hoped the leaky roof would hold up and held her first market last year.

Over 1,000 people showed up, mostly from word of mouth, a Facebook post and a lot of praying.

The next market, four months later, nearly doubled that. The parking lot was filled with license plates not just from Pennsylvania but also Ohio, West Virginia and Maryland.

She had local high school kids directing parking in the old gravel lot, and her sons Jacob and Carter manning a food drive at the entrance as customers brought in canned goods for the local food bank.

Two years after her "crazy" idea, Whitney and her husband bought the old building for the cost of the back taxes. Since then, they've fixed the leaky roof, installed lovely bathrooms and hosted scores of community events, including wreath-making, a vintage motorcycle swap and several weddings.

Beyond that, she helped the community pick itself up once again.

At the diner in town (it is literally named "The Diner"), the hostess says when a Kinsey Market weekend is happening, they staff up. The next market is in a few days, and the hostess says, "We know our business will double."

By all accounts, this town should have died either with the explosions or when the trains stopped coming. Yet, out of the ashes of "American's Hometown," a young family found a way to bring life back to a place in a way that no big corporation could have.

Compared to the large monopolies we allow to control our every move -- from our privacy to how we fly, drive, book our hotels and shop for everything we need -- businesses like the Kinsey Market open us up to the very essence of localism and place.

This is an example of repurposing someone's past aspiration into a new one rather than leveling it or leaving it behind -- all because Whitney saw "amazingness" in a rusty old warehouse.