'Real America' Inside the Beltway

Salena Zito
|
Posted: Jul 03, 2019 12:01 AM
Share   Tweet
The opinions expressed by columnists are their own and do not necessarily represent the views of Townhall.com. 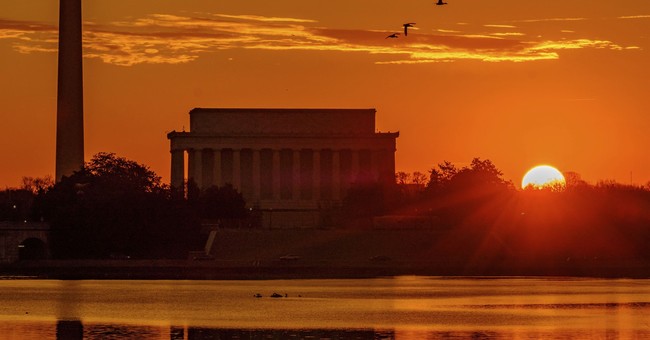 It is often said our nation's capital is filled with wealthy college-educated elites operating in a company town where everything is transactional. They are a clubby set of folks who can "fail up" in their profession and rarely interact meaningfully with anyone who isn't part of their peerage. They have lost touch with whomever they used to be wherever they used to come from.

Certainly, on the surface, things here look that way. But that is only the veneer.

Washington also serves as a destination point for Americans from across the country who often save up all year to bring their families to experience all of the history that has gone into forming this country. They visit both large and small museums; the U.S. Capitol; and the memorials honoring Thomas Jefferson, Abraham Lincoln and the brave men and women who fought in World War II, the Korean War, and Vietnam.

At the Lincoln Memorial one recent day, thousands of parents, children, and grandparents climbed the 87 marble steps from the reflecting pool to the feet of the 16th president. Dozens of languages filled the air as young entrepreneurs swiftly dodged park rangers to sell ice-cold water from makeshift carts. "Dollar water! Dollar water!" chants formed crowds around the cheerful young capitalists.

With the Washington Monument in the distance, a group of sorority sisters dressed to the nines who said they graduated from Howard University together years ago laughed at their follies as they tried to orchestrate a selfie.

Just 300 yards northwest of the tourist bustle, a different sojourner was found at "the wall." Hundreds walked silently and respectfully past the chronological list of over 58,000 men and women who gave their lives in service to this country in Vietnam.

One man, his cap noting his service, stood with his hand touching a name, weeping quietly. His skin bronze, his dark hair was streaked with white and pulled back in a ponytail. He was briefly inconsolable. His wife began singing a chant, the chords anguished. Strangers one by one gently patted his back as they passed by.

His wife said, "It is a blessings chant ... for healing."

Two blocks away, a different anguish was visible in an encampment of homeless people on E Street, within eyesight of the State Department and the leafy campus of George Washington University. People who have grown used to this anguish hurry past.

City officials insist their family homeless problem has abated. There is an irony to the rows of tents filled with people unable to make some sort of go of it in a city surrounded by six of the 10 richest U.S. counties.

Washington is just as complex as the small towns in Middle America that are often cast as homogeneous stretches of uneducated, immobile, resentful bigots.

In the past few months, I have driven through the back roads of Maryland, Virginia, West Virginia, North Carolina, South Carolina, Indiana, Ohio, Pennsylvania, Michigan, and probably some other states I am forgetting. My experiences are always the same: People are nice, helpful, giving, imperfect, hardworking, deeply proud of where they come from and profoundly aspirational, no matter what trials they are struggling with.

We often miss what is right in front of us, no matter where we live. A several-mile walk through Washington reminded me that it truly does represent all of the aspirations, weaknesses, and failures you can see and experience anywhere in this country.