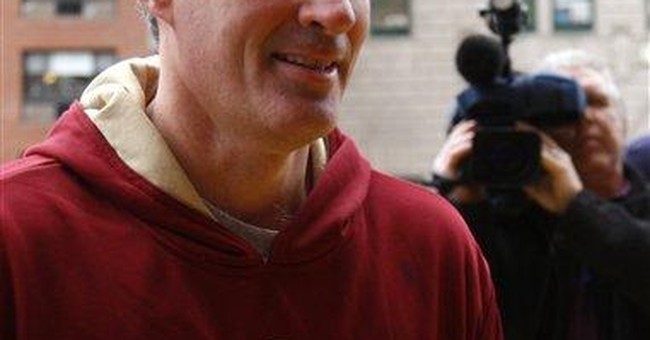 In a political year in which voters want to “throw the bums out,” the last thing any candidate should do is run as the bum.

That’s why Gov. Jon Corzine, a Democrat, lost his seat in New Jersey in November.

They ran as bums – slang for incumbent.

One can only imagine President Barack Obama’s chief of staff, Rahm Emanuel, saying to anyone within shouting distance last Tuesday night: "The people have spoken, the bastards" – channeling Democrat Dick Tuck's California state Senate concession speech of long ago.

Races always swing in one of two very different ways: left versus right (ideological) or inside versus outside (disconnected).

Long before it became instantly vogue to recognize voter anger (which, apparently was just last week, when the Beltway crowd finally asked, “Hey, who is this Scott Brown guy?”), this column has pointed out overall discontent with both parties for nearly a year.

It is not a left-vs.-right anger so much as it is an insider-vs.-outsider, Main Street-vs.-Political Elite anger.

Both political parties are in trouble but Democrats more so than Republicans – because Democrats do not appear to be listening.

Yet the liberal blogosphere is awash with commentators saying that the Democrats’ problem is not that they lost independent voters in opinion polls and in Massachusetts’ election; it is that they haven't catered enough to the liberal base.

This fight has been going on among Democrats since the Democratic Leadership Committee was founded in 1985. But the problem is not that their party is not "liberal" enough. The problem is that their party ignores what independents care about: fiscal responsibility and limited, effective government providing more liberty – more "independence," if you will.

That is what Ross Perot ran on. That’s what President Bill Clinton pivoted to after 1994, and what made independents back away from President George W. Bush and the GOP after 2005.

And it’s what is making them back away from Obama and Democrats now.

No party that tells Americans what to do, socially or financially, is safe from independents. In both Massachusetts and Virginia, the GOP seemed to be aware of that; they stuck to the basics, attracted independents – and won.

Democrats, however, are operating with the belief that they won't need independents; if they can get their base to turn out, that will overwhelm independents and the GOP.

What they fail to realize is that the Obama 2008 campaign was a once-in-a-generation turnout, similar to Bush's 2004 campaign. Without a charismatic candidate and the right electoral conditions, a base strategy is not a safe strategy.

“All of the blame lands at the top, since he has the biggest megaphone,” one Democratic advisor in Washington says of the president. The White House, he adds, should worry “if everyone starts to run their own message because they have come to realize that Obama’s good will doesn’t transfer to other candidates.”

A go-it-alone strategy will spell disaster for Democrats.

And this advisor’s own biggest fear is that the wrong lessons will be learned, “since the White House still doesn’t seem to acknowledge, ‘We hear the voters loud and clear.’ ”