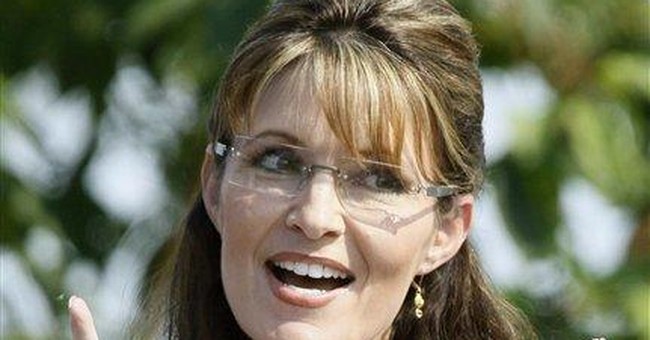 Much will be said in the coming weeks about Sarah Palin and the Republican Party-- especially after the Democratic "upset" in the Congressional race in New York’s 23rd District and the “over-the-top" Republican gubernatorial wins in Virginia and New Jersey.

First, Palin will not leave the Republican Party.

“As independent-minded and anti-establishment as she is,” says Villanova University’s Lara Brown, “she seems to understand well one of my favorite quotes from political scientist John Aldrich from Duke University: ‘The standard line that anyone can grow up to be president may be true, but it is true only if one grows up to be a major party nominee.’"

In short, Palin is positioning herself to become the Republican Party's presidential nominee and getting involved in NY-23 was merely the first step. Her book and her Oprah interview are her next major steps due out later this month.

As they say “all politics is local”-- which is why Conservative Party candidate Doug Hoffman did not win in the New York race. The endorsement of drop-out Republican nominee Dede Scozzafava for Democrat Bill Owens didn’t help. And the local GOP party bosses who first chose Scozzafava most likely decided after all the Hoffman-hype and "national-meddling" that they were not going to go out of their way to turn out the vote to help Hoffman get elected.

Yet just because the third-party guy didn’t win, the support given to him by Palin (and other GOP conservatives, such as Minnesota Gov. Tim Pawlenty, U.S. Sen. Jim DeMint of South Carolina, and Club for Growth types) should not be discounted.

First of all, for a third-party candidate, Hoffman did very well by managing to rally the GOP base to himself in a short period of time. As recent as just 30 days ago, he was thought of as a "spoiler" not a "contender."

Make no mistake, the Republican Party Leadership is still split, but that might not be a bad thing for them right now.

The GOP has to decisively figure out which way to move – towards the conservatives or towards the moderates/liberals. Last week’s races should help them figure it out, if they don't miss the signs.

“I would argue, based on what happened last Tuesday, is that they should move towards the conservatives,” Brown says. “But - and this is a big but - they need to focus on fiscal issues such as taxing, spending, deficits and debt and the size of government, issues like freedom, liberty and small government and not the cultural conservative issues (abortion and gay marriage).”

The Republican gubernatorial wins in New Jersey and Virginia were about twice as large as most people were expecting. Most predictors thought Bob McDonnell would carry Virginia by about 9 percent, but he won by 18 percent. And many believed that New Jersey Governor-elect Chris Christie would squeak out a win by about 2 percent and he won by 4 percent.

It was all about the swing voters. Independents in both states moved towards the GOP in a pretty big way and this movement had everything to with precisely the above issues – the economy, jobs, taxes, a desire for fiscal responsibility, which both McDonnell and Christie stayed focused on – and not cultural issues such as same sex marriage, which is what Hoffman and the Club for Growth focused on.

If Palin wants to be considered a credible presidential candidate for 2012, she needs to not only release her book and go on Oprah, but she needs to weigh in on serious issues (like energy and the size of government and taxing and spending) and support candidates in 2010 who promote those issues.

Palin has lots of opportunities to do that, Brown says, adding: “But if she wants to win, then she has to move away from her ‘rebellious, risk-taking conservative’ image and adopt more of a ‘substantive, discerning reformer’ image.”