As Ohio Goes, So Goes the Nation? 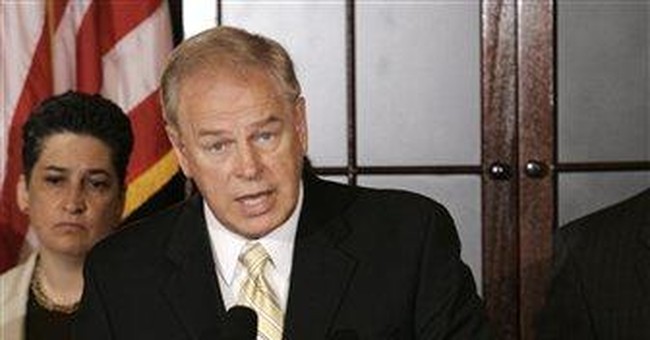 NEW WATERFORD, Ohio – If Ohio is the nation's political weather vane (and you can make a good case that it is), then a two-election trend toward Democrats may be over.

“The problems for Ohio are all created in Washington,” says Bill Watkins, owner of The Original Mario’s pizza shop on East Main Street here. “Bailouts, stimulus money, cap-and-trade have only hurt our economy, not enhanced it.”

Earlier this month, President Obama and his policies took a hit in the Buckeye State. A Quinnipiac University poll showed the president’s job-approval rating dropped from 62 percent to 49 percent, and Ohio's unemployment rate hit 11.1 percent, higher than the national average of 9.5 percent.

A couple of years ago, Ohio unquestionably was trending Democrat, according to Republican pollster Neil Newhouse. That was apparent, he said, in the composition of the 2008 electorate and in polling completed even early this year.

Things have changed. Ohio's recession now seems to be owned by Gov. Ted Strickland, a Democrat, whose handling of the state’s budget did little to instill confidence in voters that he has a plan to get the state back on track.

If the slide continues over the next two to three public-opinion surveys, then Democrats and the Obama administration have lots of reason to worry.

From the early 1990s to 2006, Ohio trended Republican; the GOP controlled the state’s legislative, executive and judicial branches, as well as both U.S. Senate seats and a majority Ohio’s congressional delegation.

That all began to change after the 2002 election, said University of Miami (Ohio) political science professor Christopher Kelly: “In 2006, the Democrats struck back, winning the governor’s seat and one house of the legislature, as well as a (U.S.) Senate seat.” They further solidified control in 2008, with more House gains.

Things have looked great for Democrats until recently, said Kelly. “Gov. Strickland, who had been popular, has seen his poll numbers fall as he has failed to get a budget that addresses the deficit that Ohio currently carries.”

And it gets uglier: A nasty tone has been set in the Democrats’ primary race for an open U.S. Senate seat, between Lt. Gov. Lee Fisher and Secretary of State Jennifer Brunner.

Kelly is not sure if Ohio voters are in the mood for a return to Republican control: “While Strickland's opinion numbers have fallen, any improvement in the economic forecast, I think, should turn around (his) recent misfortune.”

Part of the Ohio problem for Democrats is that Obama took a page from FDR rather than from JFK: Strike while the iron is hot – and while a witch’s brew of trouble boils in the national cauldron.

Whether his administration has done the right things, too little, or too much about the nation’s recession is beginning to hit home in this rust-belt state.

Then there is cap-and-trade, a lousy bill for coal-producing Ohio, but Washington’s attitude was that it is better than nothing.

That brings us to health care, or death by a thousand cuts. It's got moving parts all over the place. Everybody agrees we need universal access, reductions in cost, maintenance of quality- and, oh yes, taxes to pay for it.

The problem is that it's a pipe dream; something has to give. We have high-quality medical care for people with access to high-value insurance; we have limited access to the system, and we have a high-cost system. How do we get from here to there?

“It’s too much, too soon and too fast,” said pizza-man Watkins while filling orders at his shop.

Acutely aware of his Buckeye problem, Obama spent the day after his health care press conference last week in the affluent Cleveland suburb of Shaker Heights, talking about health care.

We have it all here, says Rep. Charlie Wilson, D-Bridgeport: “Ohio represents a wonderful cross-section of the country that seems to have the ability to walk the line between liberal and conservative.”

Wilson’s district split in 2008, going for him and for Republican presidential candidate John McCain – more proof of a deeply divided state.