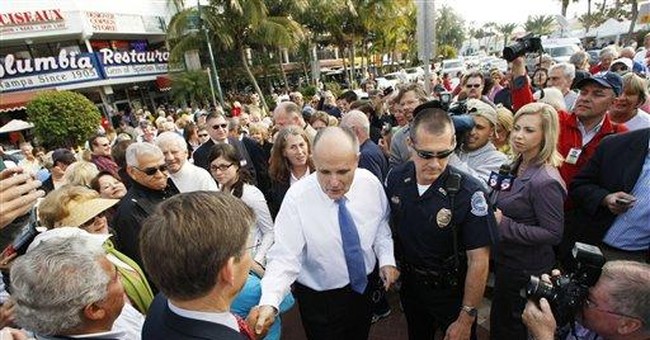 MIAMI -- Often key to the outcome of presidential elections, the Interstate 4 corridor here once again could shape a primary election Tuesday for Republicans.

Undecided voters in the growth-oriented counties along the 132-mile highway played a key role in the 2004 presidential election. The highway snakes diagonally south from Tampa to Daytona Beach through the so-called "bellwether counties" of Florida, said Marcus Jadotte, who was state director for Democrat Al Gore's campaign eight years ago.

"In a statewide campaign, you cannot just win southern Florida and win the state, and the same can be said about northern Florida," said Jadotte, now public affairs director for NASCAR. "That ribbon of Florida geography is key to all of the races."

Since their South Carolina primary Jan. 19, all of the Republican candidates have traveled I-4 in search of votes. Former New York Mayor Rudy Giuliani spent two weeks here ahead of his GOP rivals, skipping other caucuses and primaries to concentrate on the Sunshine State.

"The fate of the entire Republican primary race lies in the I-4 corridor," Jadotte says. "Whoever wins those counties will win the primary."

His prediction could hold true, if history is any indication. State election records show that since 1996, six counties in central Florida -- Volusia, Orange, Pasco, Pinellas, Brevard and Hillsborough -- have picked winners in presidential elections, including in 2004 when George W. Bush won Florida. Three other counties -- Sumter, Polk and Seminole -- also went for Bush in 2004.

"I-4 voters are typically swing voters. They are not set in their ways, but nearly always determine the outcome," said Lew Oliver, chairman of the Orange County Republican Party.

"The people who live there tend to be more transient, more diverse and, typically, are from all different parts of the country."

Among Florida's 18.1 million residents, 76 percent are white, 15 percent black and 20 percent Hispanic. The state's male-female population is about evenly split. Its median age, at 39, is higher than the national median of 36. Of the 10.2 million registered voters, 3.8 million are Republicans, 4.1 million are Democrats, and the rest are spread among 28 minor parties.

In the nation's first primary earlier this month in New Hampshire, a small state with a majority of white voters, the voting bloc that swung the state wasn't registered Republicans or Democrats, but independents. That won't happen Tuesday in Florida, because state law prohibits independents from voting in primary elections.

"I am in the most important voting area, and I will be here all weekend helping getting out the message for the senator," Ridge said.

The I-4 corridor is home to two of Florida's top media markets, a critical factor for candidates.

"There are two very huge media markets, Tampa Bay and Orlando, located (here)," Ridge said. "They are the second- and third-largest media markets in the state, slightly behind south Florida.

"In a lot of ways, the campaigns are fought and won on television in Florida. It is not like New Hampshire, where candidates make their pitches in small town hall meetings. This state is just too big for that."

An increasingly influential voting bloc for the Republican Party is the Cuban community, predominantly in the Miami-Dade County area.

That was clear Friday at Versailles Restaurant in Miami, where former Arkansas Gov. Mike Huckabee and his wife, Janet, were crushed by well-wishers as he tried to order a colada, a Cuban espresso. Across the street, a Giuliani banner in Spanish hung from the side of a building.

Pedro Delgado, 65, among those at the restaurant to show support for Huckabee, was born in Cuba and came to the United States 45 years ago.

"I enlisted in the American Army, hoping that I was going to be able to fight in 1962 during the (Cuban) blockade," he said. "I wanted to fight against Castro. Sadly, that never happened."

Delgado said he has supported Republicans since the Kennedy administration, because he believes the Democratic president failed the Cuban people by not following through with promises.

"Kennedy really let us down," he said.