Ryan Bomberger
|
Posted: Feb 13, 2020 10:52 AM
Share   Tweet
The opinions expressed by columnists are their own and do not necessarily represent the views of Townhall.com. 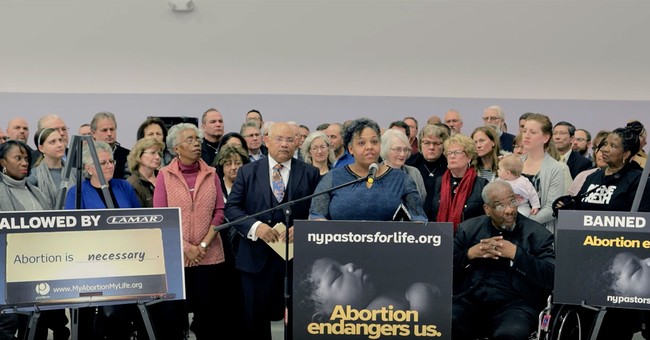 Ten years ago, the organization my wife and I founded—The Radiance Foundation—was the first to launch public ad campaigns that confronted the leading killer in the black community. Abortion outnumbers the top fifteen leading causes of death combined yet is celebrated by the Left as “healthcare.” Our TooManyAborted.com billboard campaigns (“Black Children Are An Endangered Species”, “Black and Beautiful”, and “Fatherhood Begins in the Womb”) highlighted the fact that more black babies were being aborted than born alive by an industry birthed in eugenic racism and elitism. We highlighted sources of help (pregnancy centers, maternity homes, fatherhood mentoring programs) and exposed the unaltered DNA of Planned Parenthood. We caused a media firestorm. It was surreal. Pro-abortion activists tried, in vain, to tear down our billboards or have CBS Outdoor (now Outfront) remove them. They failed.

Then, the outdoor advertising companies became the activists.

In 2018, Outfront and ClearChannel refused to allow our latest WhatAbortionReallyIs.com messaging which included text-only billboards that individually stated: “Abortion is Lost Fatherhood”, “Abortion is Regret”, “Abortion is Fake Health”, “Abortion is Systemic Racism” and “Abortion is Fake Feminism”. Outfront Vice President, Patrick J. Smith, wrote in an email: “These are not going to be approved. We find them to be in the nature of attack ads and to be unnecessarily provocative and insensitive.”

These are the same folks that put up PETA billboards and pornographic strip club ads. But OK.

Our campaign was in response to Outfront’s approved pro-abortion billboards aimed at the black community in Dallas declaring: “Abortion is Self-Care.”

In another Outfront billboard, featuring African-American abortionist Monica McLemore, pregnancy care centers were attacked for their “abortion deception” (aka medically accurate information about what abortion is and how it impacts mother, father and child).

Necessary for whom? What vulnerable communities need is more life-affirming solutions, not death masquerading as healthcare. At the time of our campaign, though African-Americans made up only 13% of Ohio’s population, they comprised a hugely disproportionate 44% of the state’s abortions. Whites made up 78% of Ohio’s population yet comprised an unrepresentative 49% of the state’s abortions. Our grassroots Coalition For Life Cleveland was filled with advocates both black and white, Left and Right, and we opposed Preterm’s deception and heinous racial targeting. Despite allowing Preterm to make outlandish claims, Lamar banned nearly all of our evidence-based messages. Lamar corporate executive, Hal Kilshaw, told me that I couldn’t prove that abortion was violence. I asked him if he’d ever seen the images of actual abortions. Silence. I told him one of the most infamous abortionists-turned-prolife-advocates Dr. Bernard Nathanson, co-founder of NARAL, declared: “All abortion is violence.” Silence.

I remember he also told me that abortion can’t really be racism because white women have abortions, too. Well, then lynching can’t be considered racist either with that logic. Some white people were also tragically lynched. The same racist ideology—eugenics—that fueled the KKK also spawned Planned Parenthood. Lothrop Stoddard, an “Exalted Cyclops” of the KKK, was an original board member of Planned Parenthood. But Lamar execs weren’t interested in facts; they chose to promote fatal fiction instead.

Just this past week in Buffalo, a coalition led by African-American pastors (NYPASTORSFORLIFE.ORG) held a press conference to talk about more billboard censorship. Lamar banned yet another pro-life message trying to raise awareness about abortion’s devastation of black lives: “Abortion endangers us.” The pastors want to sound the alarm in a state where black abortion rates are nearly five times higher than the majority population. New York, which passed the heinous and misnamed Reproductive Health Act (making abortion legal throughout all nine months), leads the nation in African-American abortion rates. All abortions are tragic, regardless of hue, but in Buffalo, 43% of black pregnancies are aborted compared to 14% of whites’ and 24% of Hispanics’.

According to the liaison between the coalition and the billboard company, Lamar execs adamantly disapproved of the coalition’s website which, in part, invoked personhood and compared abortion to slavery. They said that drawing a connection between slavery and the abortion industry’s targeting of the black community is offensive.

Let this sink in. White executives at Lamar want to dictate when and how black pastors talk about personhood.

They rejected the Abortion Endangers Us billboard, which features a beautiful black baby, because “they wish not to draw an inference that there is a unique connection between abortion and the black community.” Well. Welcome to Black History Month, outdoor billboard companies! Fannie Lou Hamer called abortion “genocide” in the black community. Jesse Jackson, before he ran for President on the Democrat ticket and did a 180, was passionately pro-life and called abortion “black genocide”, too. The late Dr. Mildred Jefferson, the first black woman to graduate from Harvard Medical School, described abortion as genocide: “I would guess that the abortionists have done more to get rid of generations and cripple others than all of the years of slavery and lynchings.”